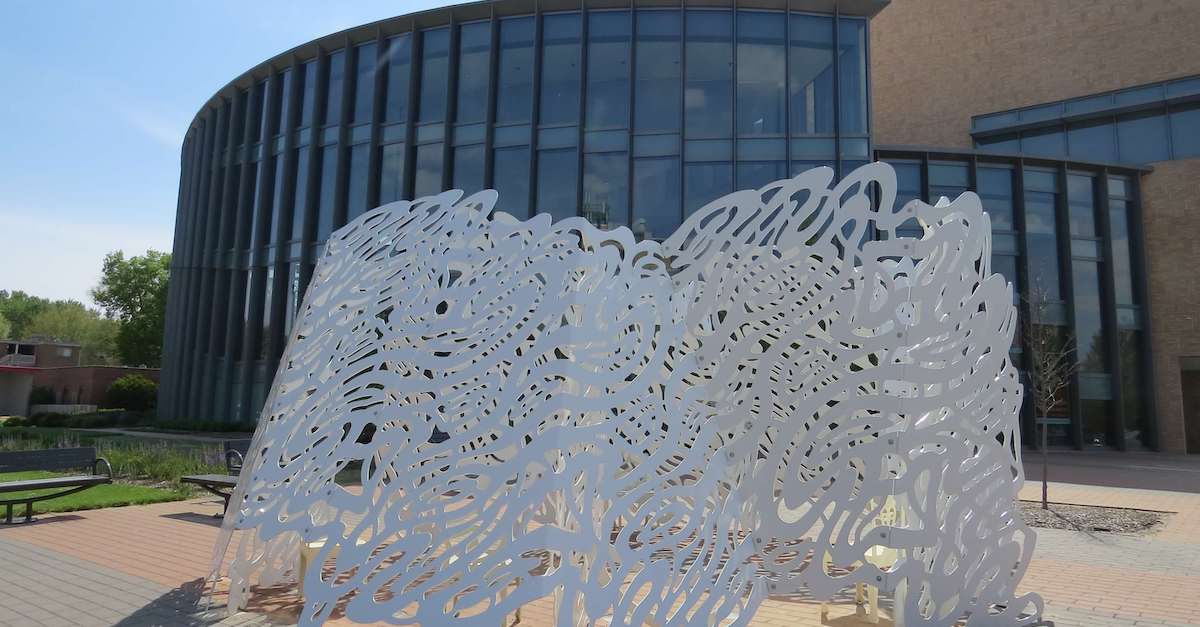 Clowns, roller skates, Bigfoot and a MASH POTATOES exhibit: From the bizarre to the historic, the museums of Nebraska offer a different take on the Americana. From Johnny Carson’s hometown to the American baseball pastime, here’s a look at 11 insanely special museums across Cornhusker State.

As you drive through rural Nebraska, you see cornfields, soybean fields, grazing cattle, and maybe even a few pigsties. But for some artists, they see the elegance of Nebraska agricultural history. You’ll find paintings of giant corn stalks and farmers on vintage tractors on farms across the state. David City embraces rural beauty at Bone Creek Museum of Agrarian Art. Opened in 2007, Bone Creek is the only museum in the United States dedicated to the art of agriculture. Located in the hometown of famous artist Dale Nichols, who died in 1995 and considered one of the most important regional artists of his time, the museum displays his collection of landscape paintings, as well as other pieces of his work. The Bone Creek Agrarian Art Museum also features works by contemporary agrarian artists.

Pro tip: For a true Nebraska experience, after your visit to Bone Creek, order lunch or dinner from the indoor drive-thru of Runza, the home of Nebraska’s hand-made bierock sandwiches.

Explore the life of an ancient Roman soldier and the fall of Rome at Clayton Museum of Ancient History at York College. The museum, which houses a collection of artifacts that its donor says prove the Bible to be an accurate source of history, includes helmets, tokens and weapons of Roman soldiers dating from around 750 BC. While most of the museum focuses on Rome and its soldiers, other exhibits explore the history of religion and the Bible. An exhibit offers a glimpse of a replica of the Western Wall, the only remaining piece of the Temple Mount in Jerusalem, which was destroyed by the Romans. Visitors are encouraged to leave a prayer written in the wall, as people do at the original in Israel. Visitors can also find exhibits focused on early editions of the Bible, including a King James version from 1612.

After spotting her first Bigfoot in northeast Nebraska, Harriett McFeely, aka The big-footed lady, was determined to share the existence of the ancient giant popular in Pacific Northwest folklore. Some people have dedicated their lives to finding Bigfoot, Sasquatch, Yeti, or whatever name you choose to call it. McFeely’s belief has been supported by others who claim to have seen the giant creature in different parts of Nebraska. the Bigfoot Crossroads Of America Museum and Research Center features skulls, photos and other evidence that supporters say prove the existence of Bigfoot. Whether you are a believer, a skeptic, or somewhere in between, everyone is invited to visit the Hastings Museum, whose exhibits span two buildings and a garden. You will find models dressed as Bigfoot in these exhibits. The museum hosts an annual Bigfoot conference which drew up to 700 people.

Pro tip: Kool-Aid was invented in Nebraska. The Hastings Museum is home to a must-see exhibit that explores the history of the sweet drink, including the colorful marketing campaigns, as well as the costumes worn by the Kool-Aid Man.

With over 7,000 clowns, the Known doll museum in Plainview is home to the world’s largest collection of memorabilia related to clowns. What started with a single clown doll donated to the local chamber of commerce has grown into an international attraction. The museum has received donations from individual collections comprising over 1,100 clowns. From dolls and figurines to paintings and plates, the Klown Doll Museum presents a collection featuring Emmett Kelly. The museum also has replicas of paintings created by comedian and clown Red Skelton. The museum adopted using the K the Klown Band, a community group that has performed throughout the state.

Travel back in time by visiting Harold Warp Pioneer Village. With 28 buildings located on 20 acres, the Living History Museum includes a mud house, one-room school, palisade, blacksmith’s shop, and military fort. In addition to the living history attraction, 12 other buildings house hundreds of exhibits, including vintage cars and trucks. You can explore the history of Nebraska transportation, from boxcars to automobiles. You will also find planes, tractors and motorcycles. The museum features an eclectic collection, such as vintage dolls and salt and pepper shakers. Pioneer Village, as it is known locally, is also home to a replica of the office once used by Senator Carl Curtis. The Minden native served in the United States Senate for 24 years, after 16 years in the House of Representatives.

Twin brothers Harvey and Howard Kenfield collected old arrowheads as children. As adults, they maintained their hobby of collecting Native American memorabilia. Eventually, the brothers turned their talents to creating art from petrified wood they found near Ogallala. They created crosses, booths and other western themed pieces. The Kenfields opened the Petrified wood gallery in 1980, and their art continues to draw visitors to the western Nebraska community. Today, the gallery continues to showcase their works of art, as well as works by contemporary artists.

Did you know that the quilt dates back to the 1600s? This fun fact and more can be learned during a visit to the International Quilting Museum. With exhibits from over 60 countries, the museum – located on the east campus of the University of Nebraska at Lincoln – has a collection of over 6,000 quilts. While not all are on display, visitors see quilts with impressive and colorful patterns, including classic Amish, abstract, and log cabin styles. The museum hosts a series of traveling exhibitions throughout the year, such as a Ken Burns Collection. The documentary producer’s collection explores the history of quilts and their impact on American history. The museum also organizes international conferences. Outside the modern designed museum stands Reverie, a unique piece of art made of a white ribbon-like material resembling a quilt blown in the wind.

MASH POTATOES Fans of TV series will love to visit the Heartland Museum of Military Vehicles. Located off Interstate 80 in Lexington, the museum honors with replicas of the 4077th M * A * S * H, along with the Doctors’ Tent – the Marsh – including the still used to create their martinis at Moonlight. You’ll find a surgery tent, an ambulance, and of course, Radar’s teddy bear. Since this is a military museum, you’ll want to see around 100 military vehicles, ranging from WWII to conflicts in the Middle East. Vehicles include tanks, jeeps, and trucks, as well as two German vehicles used in the Desert Warfare in WWII.

Calling St. Paul home during the offseason and after his Hall of Fame baseball career, Grover Cleveland Alexander retired from professional baseball after 20 seasons with 373 wins, and remains tied for most wins. victories in the National League. The pitcher also won a World Series title with the St. Louis Cardinals. Alexander was the inspiration for the creation of the Nebraska Major League Baseball Museum. The museum honors the state’s seven Hall of Fame-named players from Cooperstown, New York, with exhibits featuring items such as gloves, crampons and caps. It also includes exhibits on the Nebraskans who enjoyed a solid career in Major League Baseball, including Alex Gordon and Joba Chamberlain. A third room features screens recognizing each player with ties to Nebraska who has appeared in a major league game.

From inline skating dating from the 1700s to modern hockey and figure skating, roller skating is celebrated at National Roller Skating Museum in Lincoln. Located inside the USA Roller Sports headquarters, the museum features exhibits on the history of roller skates, including the invention of four-wheeled skates in the 1800s. The museum also includes unique exhibits, such than a pair of cowboy boots on skates. Roller sports have developed over the years and include soccer, basketball, and hockey. You’ll find an outfit worn by Tara Lipinski when she competed as a roller skate dancer before winning a gold medal in women’s ice figure skating at the 1988 Nagano Winter Olympics.

Pro tip: The museum, free entry, is open from Monday to Friday.

Heeere is Johnny! Or at least one exhibition from the personal collection given to the Elkhorn Valley Museum by Johnny Carson, Emmy-winning host Tonight’s show. Born in Corning, Iowa, Carson considered Norfolk his hometown, having lived there for most of his childhood during his college days at the University of Nebraska. The Johnny Carson Gallery includes his TV show ensemble, complete with multi-colored curtains, Emmy trophies, photos and more. Norfolk was also the hometown of several celebrities and public figures recognized at the museum, including the Hall brothers, who created the Hallmark cards, Thurl Ravenscroft, who sang You are a villain, Mr. Grinch and was the voice of Tony the tiger for the Frosted Flakes commercials, Rosie O’Neill, who created the Kewpie doll, and Orville Carlisle, who invented the model rocket.