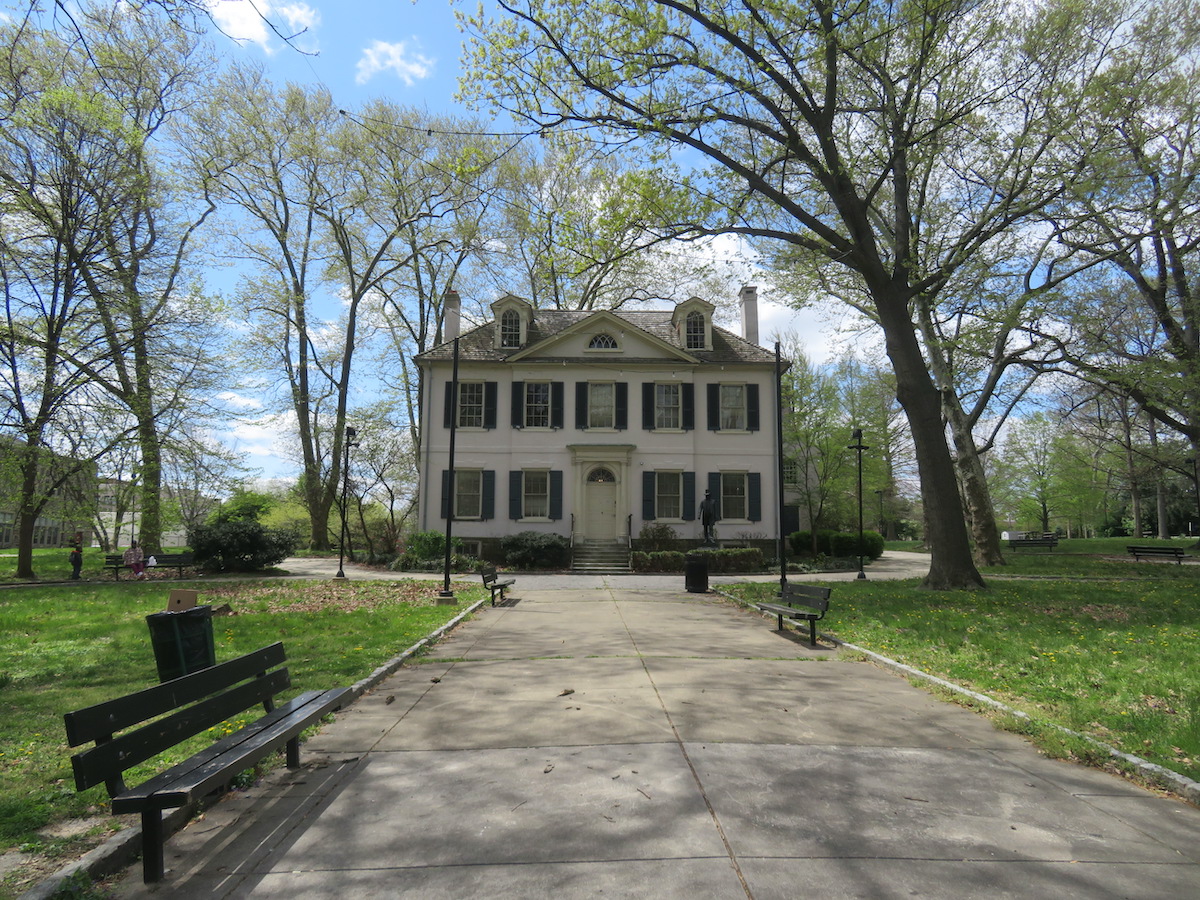 Due to Philadelphia’s proximity to Manhattan and Washington, DC, the City of Brotherly Love is often credited with offering nothing but cheesesteaks, the Liberty Bell, and Rocky Steps to the Philadelphia Art Museum.

Yet 6 miles from historic Old Town is Germantown. Purchased from the founder of Pennsylvania, William Penn, the first German settlement (c. 1683) in what was then British North America was the precursor to all German towns in the United States. Settled by Germans, Mennonites and Quakers (Society of Friends), this neighborhood’s history rivals and, in some ways, surpasses downtown Philly. Known as “Freedom’s Backyard” and for being more of a low-key community, you won’t find bus tours or a big Tourist Office invitation to visit. So it’s best to explore on foot or by taking public transportation (Route 23) or Uber/Lyft. Thursdays through Saturdays are generally the best days to explore this neighborhood.

Philadelphia’s Germantown thrives on its three intersecting identities: Colonial/Federal Era America, Quaker Life, and The Great Migration (1916-1970). The places and sites that I propose include the three identities. Since it is impossible to list all the places, I focus on my personal favorites and highlight a few others.

Wayne Junction (completed in 1881 as Wayne Station) is the official start of Germantown along its southern border. But before strolling down Germantown Avenue, which runs the length of the neighborhood, walk a few blocks east to see the first suggested stop on this tour…

This former home of James Logan (1674-1751) was part of his estate which included the surrounding area. Logan was a Quaker who came to the New World on William Penn’s second voyage (1702). He became a mentor to a young Benjamin Franklin. The house would later house George Washington and serve as a temporary camp for British General William Howe during the American Revolution.

Dinah, a former slave who lived on the land, became part of house legends after saving the house from British soldiers. Sarah Logan Fisher (1751-1796), is mentioned during field trips because of her historical research, which was later used by the Historical Society of Philadelphia.

Go back to Wayne Junction and continue through the passage to “the attic”. Housed in a former pencil factory, Attic Brewing Co. quickly became a popular hangout spot in the dining room or outdoor garden. The collection of craft beers, mixed drinks made from local spirits, and rotating food carts add to the relaxed vibe.

After quenching your thirst, walk 10 minutes to Germantown Avenue. On your left, you will notice a house in the middle of the park surrounded by a fence: Loudon Mansion. The site was used during the Battle of Germantown (October 4, 1777) to house wounded Continental soldiers. To this day it is known to be haunted by a ghost named Little Willie.

At the corner of Logan Street and Germantown Avenue you will find the Lower Burial Ground, also known as Hood Cemetery. If you look through the fence, you can see the graves of soldiers who died in the Revolutionary War, War of 1812, and Civil War. These graves are marked with their respective military flags nearby.

From there, take the 23 bus, which goes up and down Germantown Avenue, or ask for an Uber/Lyft. As you ascend, you will see the following sites of interest…

This house was occupied by British Brigadier General James Agnew (1777) during the Battle of Germantown. Agnew was mortally wounded in action and died on the living room floor, leaving a still visible bloodstain.

This plaque commemorates what happened in 1688. In that year, Quakers became the first religious group in the 13 colonies to submit a petition protesting the enslavement of Africans. That’s why today a nearby mall is called Freedom Square.

As you pass this location, admire the Colonial and Federal houses at both ends of the street. Many of them have their own stories which you can find online.

Get off the bus at Market Square, which is in the heart of Germantown. If you visit on a Saturday you will see vendors selling items as many generations have done since 1703.

If you need a menu or a moment of rest, head to Uncle Bobbie’s, which offers a bohemian twist in Germantown. The location invites local scholars, friendly conversations, and a glimpse into Germantown’s future provided by the younger generation. Once you exit, look to your left…

This house was used as President George Washington’s summer residence during the yellow fever epidemic of 1793. Although closed for much of the year, it’s still worth a visit to see the facade and read the various plates and signs on the outside.

9. Fromberger-Harkness House and Lest We Forget Museum

Across the Market Square is the Fromberger-Harkness House, home to the Germantown Historical Society. On the ground floor is the Lest We Forget museum.

This personal favorite museum houses a private display of authentic slavery artifacts. Hosted by the Ragsdales, this is the place to visit to have honest conversations about America’s ‘peculiar institution’. If you plan to visit, allow at least 2 hours – it will be worth it.

In the center of the Market Square, you’ll notice various statues and memorials to soldiers who died during the Revolution and Civil Wars, including one that was on the Confederate side.

Continuing north to Germantown Avenue, watch out for the large building on the right side of the street.

Throughout the year, Germantown hosts a number of special events that showcase local R&B and jazz. Typically, local radio stations and community events feature a number of artists who have performed at La Rose. Come to the club during the evening and you might see future stars before they are ‘discovered’.

Continuing north from La Rose, you will notice a change in the appearance of the area. For me, this is the most interesting aspect of the neighborhood. Throughout the 20th century, there was something of an identity crisis based on how the region should appear to visitors. To attract more tourists, many locals believed that focusing on the German beginnings and colonial history of the area would create the most interest. For me, the mix of all of its stories – including those of black and brown Americans coming from the North during migration (1916-1970) and Italians seeking a cosmopolitan environment – ​​is what makes it most interesting. You will see examples of this in several places.

Created in the 1970s as part of Philadelphia’s urban renewal project, this mall is one of the area’s hidden secrets. Along this little street you will find various architecture highlighted in bright colors, G-Town Radio, the Prince Hall Masons Lodge and various small shops ranging from café and vegan restaurants to private galleries.

This historic landmark on Germantown and Chelten avenues sheds light on black wealth in the late 19th and 20th centuries.

It is the site of the Wister House, which is used by the Black Writer’s Museum. One of Andrew Carnegie’s libraries forms the northern edge of the park. Numerous memorials to the Continental Army stand throughout the grounds.

Across the street you’ll find the ACES Museum at 5801 Germantown Avenue and can appreciate the different architectural styles along E. Price Street. Continue north and you’ll find Germantown City Hall, which stands out for its unique design. A little further on, you’ll find the Wyck House, which celebrates Quaker culture, at 6026 Germantown Avenue. From there you can walk another 10 minutes north to see the following…

Home to many generations of the Quaker Johnson family, it was also a site on the Underground Railroad and is said to have hosted Harriet Tubman for a night out.

Continue further north and you will reach the summer residence of Benjamin Chew (1722-1810), a northern plantation used until the 1970s and site of the Battle of Germantown, which Washington lost, allowing the British to march and occupy Philadelphia. This house housed the rich inhabitants of the region, as evidenced by their signatures engraved in the glass.

More to see in Germantown…

If you’re up to it, also visit the Young American Hard Cider Room, the Concord School House, and the Lower Burial Ground. Continue north to Chestnut Hill, which is another neighborhood that offers bistros, artisan ice cream, galleries, and antique shops.

As you know by now, there’s a lot more to see in Philadelphia than just downtown. While visiting Freedom’s Backyard, you can learn about local history and interact with friendly residents.

Visiting Philly? Also read the 6 best things to do in Philadelphia’s Rittenhouse Square, more where to eat, and 13 foods to try in Philadelphia besides cheesesteak.