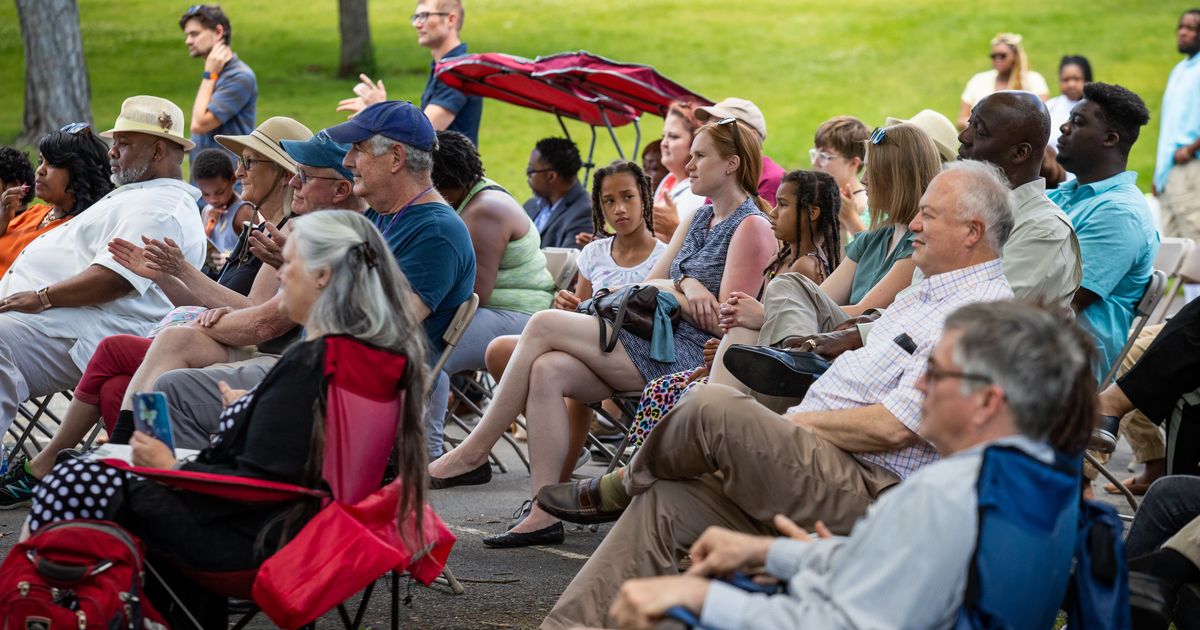 Opal Lee, 95, is a retired educator, children’s book author and longtime humanitarian. In her hometown of Fort Worth, she runs a 13-acre urban farm and champions causes such as homelessness, education and health care.

More broadly across the country, Lee is also considered the “grandmother of Juneteenth.”

But as she once humbly said, “I’m just an old lady in tennis shoes minding everyone else’s business.”

Since 2016, Lee has traveled the country in these lace-up sneakers to push for national recognition of Juneteenth, which commemorates June 19, 1865. On that day, Union soldiers announced freedom to enslaved black people. in Galveston, Texas – more than two years after President Abraham Lincoln’s Emancipation Proclamation.

While millions of black Americans like Lee have long marked their freedom memorial day, others in the United States are still wondering how to meaningfully observe the new national holiday.

But activists say this recognition is important to everyone. “It’s not just a black holiday,” said Alicia Austion, executive director of the Juneteenth Foundation. “It’s a national holiday, an American holiday that we should all lean into and really recognize and support.”

We asked activists and organizers to share different ways Americans can honor Juneteenth.

Visit a local or national museum

Mary Elliott, curator of American slavery at the Smithsonian’s National Museum of African American History and Culture, emphasizes the educational value of museum experiences. For example, Elliot said, “The Slavery and Freedom exhibit is really great because we walk through this whole history from the beginning of slavery to Reconstruction. We also bring it to segregation and until today. So it allows you to look back and look forward.

She also highlights the importance of local museums, which can help visitors better understand the history of their own community. “Local history museums are hugely important because they make history more personal,” she said, because “one thing we learned with this story is that it’s very nuanced.”

For those unable to visit a museum in person this year, a handful of black museums and historical institutions across the country will participate in a virtual BLKFreedom.org program to commemorate Juneteenth.

“Learn what Juneteenth is – that’s where you start,” said Cliff Robinson, who started the Juneteenth.com website about 25 years ago to offer information about national events.

“It’s like Veterans Day and Memorial Day,” he said. “Now is the time to stop and reflect on history, your own story or the story of a friend.”

Among his recommendations for researching this history is the work of James Baldwin, an acclaimed activist and writer who has written about racial injustice in America. “I think James is probably one of the most prolific people you can listen to in that regard,” Robinson said. In particular, he recommends “I Am Not Your Negro,” a 2016 documentary based on Baldwin’s unfinished manuscript “Remember This House,” which examines race relations in America based on Baldwin’s personal memories of civil rights leaders. Medgar Evers, Reverend Martin Luther King Jr and Malcolm X.

Elliott, the curator of the African American Museum, said documentaries can offer insight into specific events and eras of the black experience. “There are some great documentaries about Reconstruction, about slavery, about the Civil War,” she said, adding that viewers should also explore events after those times, like the Tulsa Race Massacre. . “They go into a bit of detail about what happened after the advent of freedom, because you can’t just look at that particular moment in time.”

Elliott also recommends examining the historical speeches and writings of activists like Frederick Douglass and prolific writers during the abolitionist movement. “Think of the poetry of the time as [that of] Frances Ellen Watkins Harper,” she said, “who writes beautifully about feelings, but also about history – what was going on at the time.”

Phillis Wheatley, credited as the first black poet published in America, is another name suggested by Elliott. His poetry explored questions like “What is slavery?” What is this desire for freedom?

Attend a celebration or party

Austion thinks the June 19 celebrations provide a time to reflect and recognize some of the major gains and accomplishments of the black community: “It’s worth looking at this holiday as a way of saying, ‘Because of this achieved freedom, all these other things could have happened. ”

This year, Austion is also encouraging people to explore the festivities in their own community. “In many places across the country, June 19 festivals are annual events,” she said. “You could go to just about any state and you’re going to find an organization that has a Juneteenth festival.”

Get involved in the community

Robinson, the creator of Juneteenth.com, advises people to know how to show up and support local black organizations, which can have a more direct impact in the community.

“Look locally and see who’s doing what in your town and find out how you can get involved, and if there’s no organization doing that, then consider creating an event,” said Robinson, whose website offers ideas for launching initiatives in local communities, as well as in the workplace. Robinson also launched a street sign campaign for neighbors to show solidarity. It’s a small gesture, he says, but it helps send a message of unity.

Another idea backed by Austion is to buy from black-owned businesses — a commitment she and her family have made for the month of June.

“There’s a huge opportunity to really create black wealth and empower a lot of what’s going on in our own community,” Austion said. “But where we can, for the month of June, we kind of try to lean into the black community and get things more directly.”