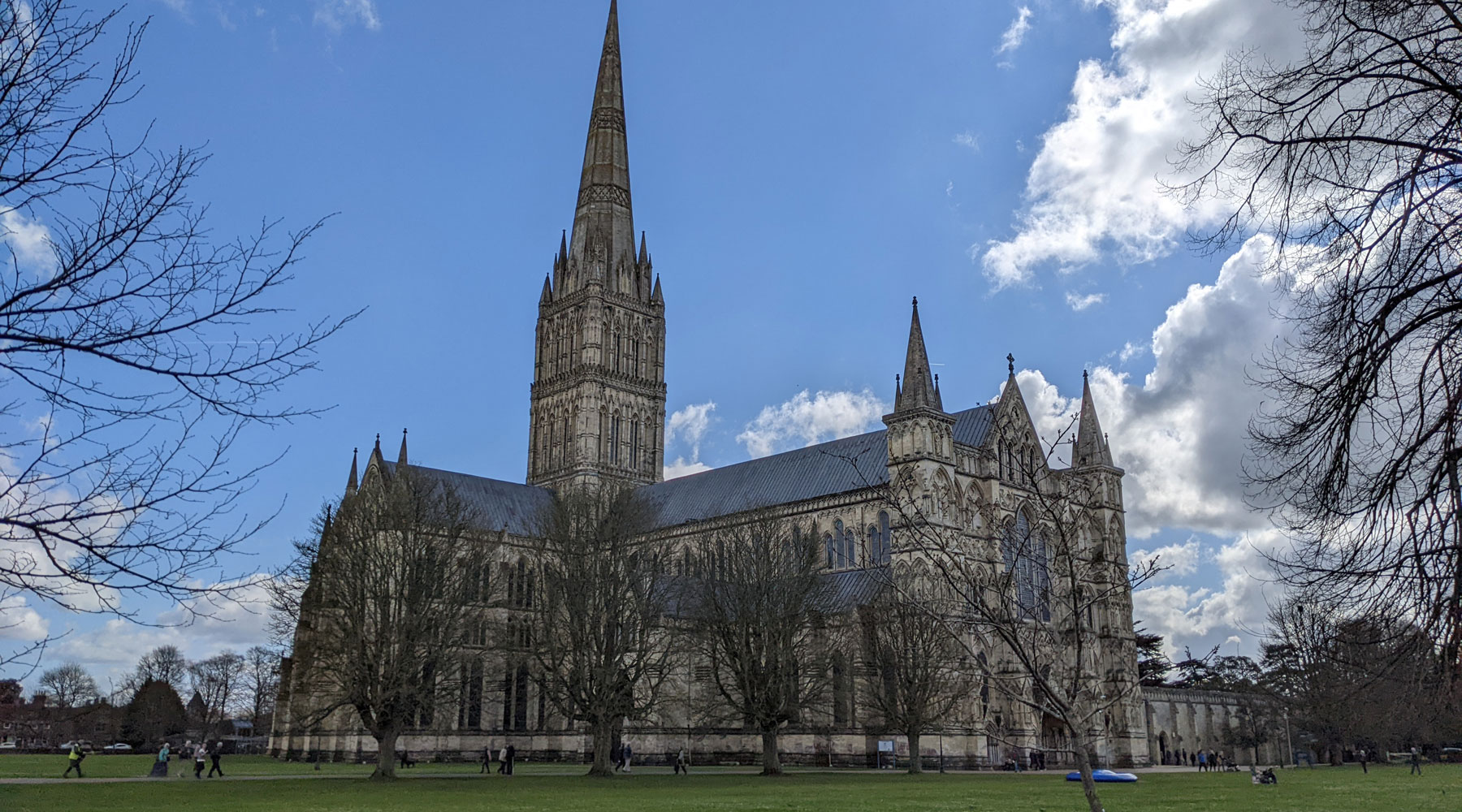 A day trip to – Salisbury

An ancient cathedral city on the River Avon and a convenient stopping point for visitors to Stonehenge has plenty of other things to keep people busy on a day trip.

My visit was triggered by the possibility of visiting Longford Castle, which is open for guided tours on certain days of the year. As it took most of the afternoon I skipped a few things to visit so you can pretty much do Salisbury in the morning and then Stonehenge or Longford Castle in the afternoon.

Fortunately, Salisbury is also a fairly compact old town, with the four major attractions practically side by side, and around 15 minutes’ walk from the town’s main train station.

It’s not the cheapest place to visit as pretty much anything inside will charge you entry, but the town center is pretty so even if you’re only visiting the town and nothing else around, you can fill a day with the museums and a nice walk around the architecture.

It is the famous cathedral with the famous spire that has acquired an unfortunate ignominy thanks to the actions of Russian spies.

The entrance is through the cloister, and inside a leaflet offered, and a note indicating that the demonstration of the old clock was in an hour, then all you have to do is wander around the premises. When I visited, a school choir was singing in a side alley, but maybe a Friday morning is too quiet for tourists as I had most of the building to myself.

A guide spotted me looking at a sign when the cathedral flooded and lifted a rock in the ground to show me how close the floodplain is to the ground. It has recently risen a foot in the last few weeks so it is about 2 feet below the stones. No basement under this cathedral, of course.

You can climb to the top of the spire, but only in pre-booked groups (or a single wealthy person paying for a group), because for the rest of us it’s a classic cathedral tour, looking up up, down, sideways, noticing the memorials and admiring the stones.

What the cathedral also has is a copy of the Magna Carta, now on display inside the chapter house, in a rather temporary tent to keep it dark.

Entry to the cathedral costs £9 for adults and is reasonably priced for around an hour’s walk.

I was admittedly about to skip that, as £8.80 to visit a local history museum seemed, well, a bit much frankly, based on many visits to other local history museums. In the end, I joined just to make sure I finished as much as possible on a visit, and I’m so glad I did because it really is a great museum.

There is an absolutely huge archeology room which would look great in a national museum and tells the story of the many sites and burials around Salisbury including, of course, Stonehenge. There’s everything from pre-Roman and Roman antiques to Victorian antiques and modern finds here.

The rest of the museum is closer to what you might expect, with local history highlighted, and less expected, a giant 3-metre-tall behemoth that once paraded through the town.

Considering I expected to spend 30 minutes there, I walked out an hour later and had barely scratched the surface of what was on display.

On entering, another seemingly expensive venue with tickets costing £9 per adult, but then the ticket seller asked me if I had this membership, this membership or the other – all no. Did I arrive by train? Yes. Ahh, half price entry then.

So effectively just £4.50 for house and garden.

In my experience, house museums dedicated to the person who lived there tend to attract people who know the person in question, and with all due respect to politicians, Ted Heath is not a Prime Minister well known. Although he was an important character in his time, he is not Thatcher or Blair in the fame stakes, so I expected a nearly empty house.

I was wrong, it’s surprisingly busy and I never had any of the many rooms to myself. Small tourist guide sheets are displayed on music stands, which is a nice touch as Ted Heath was almost as famous for his pleasures as his politics. Here, then, is a man who, far from politics, was famous for participating in and often winning sailing competitions, and being gifted enough to conduct orchestras.

It’s almost hard to think of a high-ranking politician today who is known for anything other than politics, and I suspect that would have made Ted Heath a nicer dinner companion. Speaking of which, it turns out he was, and his custom-made dining table has some old place cards showing the range of his retired visitors.

Unexpected is a huge Chinese mural on the staircase, and it’s clear he was a big fan of collecting Asian art and antiques. Political memorabilia is highly anticipated, photos meeting the big names of the day in his time during World War II, and his awarding of the Order of the Garter.

As a grand house it is well worth a visit, but it gives a rare insight into the mind of a leading politician of his time.

Other things to see

A 13th century gatehouse which is remarkably still traversed by road vehicles, it sits on the main road linking the station to the cathedral. Look at the large coat of arms on one side and the statue on the other. Oddly enough, it’s not listed on the Visit Salisbury website.

Another medieval gate, this time on the other side of the cathedral, and apparently much less busy as it leads away from the main shopping and tourist areas.

A 14th century market cross that would have been in the middle of the old medieval market. There were four, but now only this one survives.

Even older than the cathedral, this 800-year-old church has the most notable medieval ‘doom painting’ that towers over the church and shows the Last Judgment. A permanent warning to the congregation to behave well. This grim painting, dating from around 1470, is the largest and best preserved of this type of wall painting in the UK, and in my opinion would be worth a trip to Salisbury on its own.

It had been whitewashed by the Puritans and nearly lost until its accidental discovery in 1819, but only discovered in 1881, and has recently undergone proper restoration to preserve the lime plaster on which it was painted.

The Rifles Berkshire and Wiltshire Museum – ran out of time

Be aware that on the way back, as a member of staff at Salisbury station explained, the display screen for the next fastest train to Waterloo may not be the fastest to arrive. On my trip I waited 50 minutes for the fast train but was advised to take a slow train to Basingstoke and change to a fast train to Waterloo – and that actually made me got home about 20 minutes sooner than I would have. .

Football News Live: Chelsea take control of the latest updates and prepare for the return of the Premier League

Appropriation bill will be tabled today