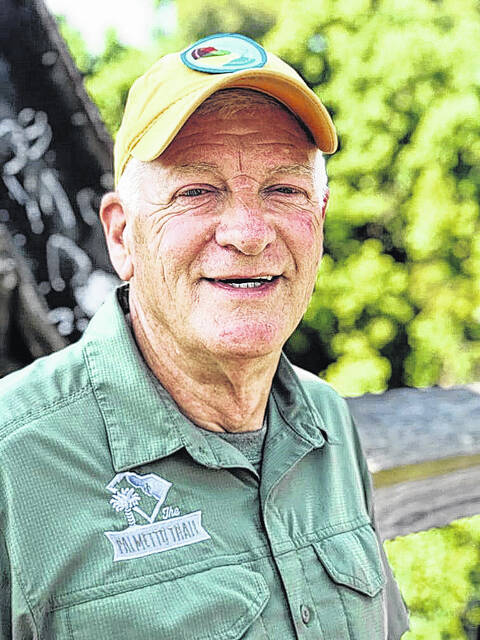 I like history. No excuses. What happened hundreds of years ago on the ground beneath my feet has always intrigued me. I love the area around Newberry as it is full of well known history and some little known historical surprises. This is one of the great advantages of the Palmetto Trail. It makes you discover real historical treasures. The trail’s Newberry Passage has its fair share of stories, and I’d like to share one with you.

A historical treasure, Marie Boozer of Newberry, someone who would achieve almost legendary status – or notoriety, depending on how you look at it. Marie was renowned for having gorgeous wheat-colored hair, rosy cheeks, large bright hazel eyes, and was always impeccably dressed. General William T. Sherman described Boozer as “magnificent” in his memoirs. Socialite Mary Chestnut, who kept a diary during the Civil War, wrote that Boozer was “a beauty no one can deny”. Chestnut also wrote, “Boozer…is still on display. Even General John S. Preston of the elite Columbia family described Boozer as “the finest piece of flesh and blood”. [he] had never seen.

But all was not as rosy as it seemed within the Boozer house.

Mary Boozer was the daughter of Amelia Boozer, a beautiful woman in her own right, who had been widowed three times and separated from her fourth husband at the age of 31. Mary, who called herself “Marie”, is generally considered the daughter of Amelia’s second husband, Peter Burton, but was adopted by Amelia’s third husband, David Boozer. (Still confused?) Amelia’s fourth husband, Jacob Feaster, apparently avoided the fate of her previous husbands, as she simply abandoned him when she left the state. He might have been the lucky one! Besides the multiple husbands, Amelia was also an ardent Union sympathizer, which made her an outcast among the citizens of the South.

Marie moved to Columbia with her mother and sister as a teenager and was there during Sherman’s occupation. Her mother had big aspirations for her daughter and pushed her in front of everyone, obviously hoping to help Mary climb the social ladder as high as she could. Amelia determined that her best chance for this was with the Union Army, so Marie and her mother were among about 50 families who left Columbia with the Federal Army when they marched north after destroy the city. They rode near the front of the civilian column in a sleek black car.

This is where it gets interesting. As the stories go, Marie was one of the infamous ladies who accompanied General Kilpatrick on Sherman’s 1865 march through the Carolinas. Kilpatrick developed a reputation as a ladies’ man after his wife’s death in 1863, and some sources report that several young women accompanied him on his campaign in North Carolina. Kilpatrick was often seen riding with his feet dangling outside a buggy and his head resting on a woman’s lap. His companions are variously depicted as stranded schoolteachers, women dressed in men’s clothing (whom the troops called Charley and Frank), and other unsavory characters. A lingering story, disputed as legend by some historians, places Marie Boozer and her mother among this group

The confusion stems from conflicting reports of Mary’s whereabouts during Sherman’s walk. Unfortunately, these conflicting reports do not allow us to say with certainty whether she was present during one of the most humorous (for Southerners) and most humiliating (for Northerners) stories of this campaign. For the first time since Atlanta, Confederate forces were beginning to converge in sufficient numbers to challenge Sherman’s progress. A combined cavalry force of General Wade Hampton, General Matthew Butler, and General Joseph Wheeler learned that Kilpatrick was camped nearby at Monroe’s Crossroads, located within the boundaries of what is now Ft. Bragg. Able to sneak into camp thanks to the laxity of Union sentries, the Confederate cavalry charged at dawn. Hearing the noise, Kilpatrick jumped from a feather bed in the house and ran outside in his soft nightgown. Southern horsemen rushed into camp, slashing and firing as they came.

“It was the most formidable cavalry charge I had ever seen”, Kilpatrick would later write in his memoirs, and Kilpatrick had seen many daring cavalry charges during these war years. Fearing for his life, Kilpatrick jumped onto a nearby horse and escaped in his underwear, earning him the name “Shirttail Skedaddle”. The interesting twist here is that Kilpatrick reportedly had female company in the house, and that company was allegedly none other than dear Marie de Newberry. Whether it was her or not (and there’s mounting evidence that it probably wasn’t), her reputation was such that people were ready to believe it was her. Whatever the truth, the fact is that Sherman had had enough of her being such a big distraction to his troops and ordered her to leave. Marie left the army company at Fayetteville, North Carolina, and boarded a small steamer heading north. After leaving the Yankee Army, Marie began the next chapter of a remarkable and romantic life. She ended up marrying a wealthy northern businessman whom she quickly divorced. She then traveled to Europe and married a French nobleman, becoming Comtesse de Pourtalès-Gorgier. She moved to Europe and died in Italy in 1908 or 1909. Thus ends the astonishing life of Marie Boozer, a woman who is at the center of many legends, scandals and affairs. And she got her start here in little old Newberry.

As always, for more information on the Palmetto Trail, please contact me at [email protected] Happy hiking!

Furman Miller can be contacted at [email protected]