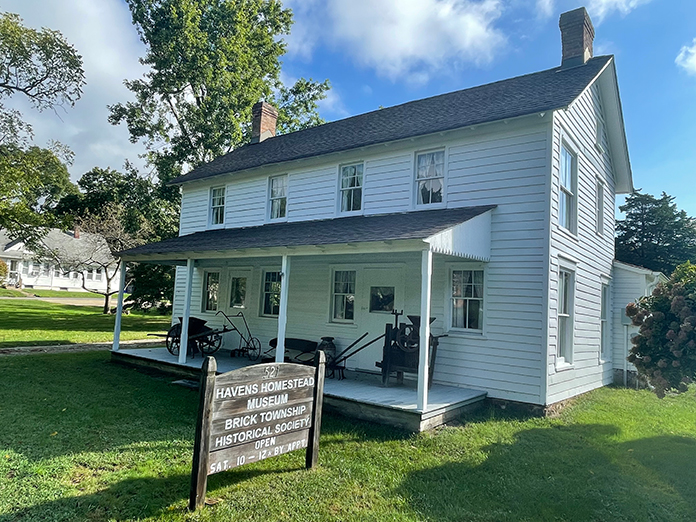 A tour of the historic Brick houses

BRICK – Most of the township’s early houses were built on main roads and on large plots of land. Some of the houses are still standing, and many of their original occupants have familiar township names like Hulse, Havens, Herbert, Osborn, Burr, Gant, and VanNote.

The Brick Township Historical Society hosted township historian Gene Donatiello at a recent meeting, and there was a record attendance of around 75 people to hear his PowerPoint presentation on historic homes in the Township of The Brick.

The first township houses were built with posts and beams, which used large beams joined and glued together without the use of nails, he said.

“The Lizzie House and Museum were built this way,” said Donatiello, referring to the company’s Havens Homestead Museum at 521 Herbertsville Road, purchased by Curtis Havens in 1827. The house remained in the Havens family until in 1993, when they donated it to the Historical Society.

Around 1790, Lizzie House, once located on Herbertsville Road near the border of the Wall, was moved to museum property in 2001 and serves as the museum store. Emma Elizabeth (Lizzie) Herbert was born in the house in 1902, and lived there her entire life until her death in 1998 at the age of 96.

Another historic home is the Richard Burr House, circa 1810, located at 1581 Burrsville Road. Burr and Banajah Butcher owned the Butches Burr iron forge near Forge Pond, and the first town hall was held there.

There are a number of historic homes on Drum Point Road. The circa 1920 Percy Gant House still stands in modified form at 241 Drum Point Road since a porch was added, but the original owner was a well-known duck bait sculptor and an image of one of his decoys was used on an American stamp, says Donatiello.

Some of the early settlers made their living growing cranberries. There is still a sorting shed on the property at 203 Drum Point Road, a corner property that was once owned by Alanzo and Ella Van Note. Across the street at 197 Drum Point Road, what was called “The Cranberry House”, circa 1900, owned by Van Note’s daughter, Mutah and her husband John Patterson. Mutah had her own cranberry growing business and was known to hire women.

The current shopping center, Brick Plaza, was the site of a large cranberry bog owned by the Van Note family. The nearby stream would be blocked during the wet harvest of cranberries, which float due to air pockets inside the fruits.

By the turn of the century, the Township of The Brick ruled Ocean County in the production of cranberries.

Enoch Robbins, a ship captain, owned 1845 Highway 88 East. The house was built in 1840 and all buildings are still on the property including barns, a cedar outbuilding and a shed.

The house was recently sold and will be used as office space for an electrical company.

Around 1890, the Hulse House at 471 Herbertsville Road was located on Maple Avenue and was moved to its present location. The first owners had a business that produced around 30,000 hand-made bricks per year. It currently belongs to the canton where the Preservation Commission holds its meetings.

The Wagner House, circa 1790, located near Herbertsville Road on Winding River Lane was typical in that it had multiple additions, including two upstairs rooms that were not connected. To go from one to the other, a person had to go down and up, Donatiello said. One of the stairs was in a closet.

The Sears catalog homes started appearing around 1908, he said, and there are still several in town. “Kit” homes were known to have markings on the beams to make it easier to assemble, much like the current “kit” homes sold by The Home Depot for around $ 44,000, Donatiello said.

The 1950s brought a number of steel houses to Brick Township. The one at 3919 Herbertsville Road was built by the Riviera brothers who built Riviera Lake and Riviera Beach.