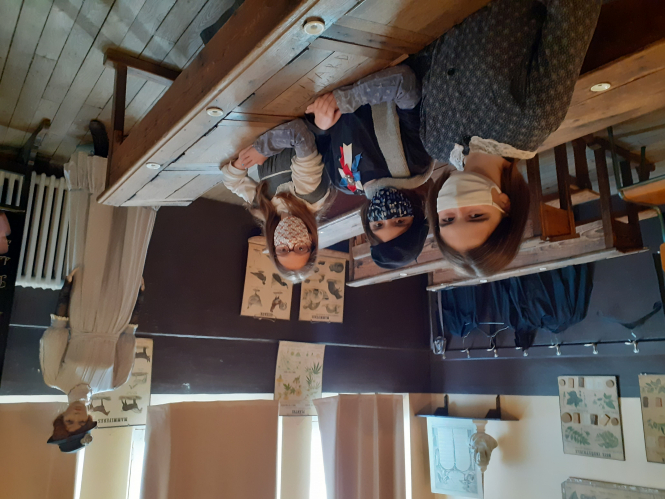 Back to school: visit the school museums of France

Education occupies a sacred place in France; in general, the words “self-taught” do not carry much weight, while academic performance is so highly valued that everyone in France has a personal fund allowing them to continue their studies or training throughout their his life.

Not only that, but across the country school museums offering nostalgic visitors the opportunity to return to the schools of their grandparents, sit in hardwood chairs behind vintage wooden desks, and jot down dictation (dictation) with real ink pens. Some school children even kit yourself out in gray smocks and traditional berets.

This joins a plethora of warm films about a certain type of elementary school.

Perhaps the best known is the documentary To be and to Havemade in 2003. There follows a year in the life of George Lopez as he teaches his only class of children aged 4 to 10 in the village of Saint-Etienne-sur-Usson (Auvergne), learning for the little ones to read and prepare the older ones to go to middle School.

His patience and dedication, combined with his students’ eagerness to learn, left everyone in limbo in the face of a rapidly disappearing rural way of life. The film was a resounding success.

Les Choristes, released in 2004, was also well received, even though it was pure fiction. Set in 1949, it was about a teacher sent to a rural boarding school for problem boys.

Himself a music lover, Professor Clément Mathieu undertakes to teach boys to sing in a choir and, in doing so, transforms their lives. The film won a César and two Oscar nominations.

The much grittier semi-autobiographical film Between the walls (renamed The class for the English version) followed in 2008. It was about another devoted man, François Bégaudeau, teaching French and literature to a class of middle School children from the underprivileged 20th arrondissement of Paris.

It won the Palme d’Or at the Cannes Film Festival.

But if people thought one-room primary schools were a thing of the past, filmmaker Emilie Thérond’s 2015 documentary showed they still exist.

My school teacher follows his own teacher to Saint-Just-et-Vacquières (Gard) during his last year of teaching before retirement. It’s a beautiful film about a dedicated teacher, and which perfectly illustrates the nostalgia of the French for a certain idea of ​​primary school.

An education for all

Until 1698, education in France was primarily the domain of the church and was almost exclusively for the wealthy.

Universities were created from the 12th century, and in 1698 Louis XIV ordered parents to send their children to village schools until the age of 14 and ordered villages to organize these schools and to fix teachers’ salaries.

Education was disrupted during the Revolution, but in 1802 Napoleon introduced the baccalaureate and set up high schools and, in collaboration with universities, large schools to teach science and engineering.

In 1815, universal, compulsory primary education spread throughout France, and as the Industrial Revolution progressed, employers pressed for a better-educated workforce.

Jules Ferry, Minister of Public Instruction from 1879 to 1880, gave his name to laws extending education, particularly secondary education, to girls in 1880, and making primary education universal and free in 1881. Today, about 650 primary schools, colleges and high schools bear his name.

With the separation of state and church in 1905, public schools are entirely secular. Secondary school became free between 1926 and 1930.

In many villages, if you look up, you can still see the words boys and girls carved in the stones of the town hall or the school, testifying to the custom of separating girls and boys, until diversity has become the norm.

Some of these classrooms have been restored as they would have been in different eras, and when school museum “school days” are announced, truancy is no longer an issue. Places are quickly sold out, either because they loved the school or because they are still hoping to get the best grades!

Everywhere in France, adults are happy to pay for the privilege of going back to school. There are about 150 spread over the whole of France. A selection is listed here.

The National Museum of Education (MUNAÉ) in Rouen is the only public example, and with almost a million objects and documents, has the sixth largest museum collection in France. It welcomes around 20,000 visitors a year and deals not only with the history of the school, but also with French education, childhood and the family, toys and games. The collection extends from the 16th century to the present day.

“A lot of school museums are very nostalgic, and of course it’s hard to talk about school without a certain nostalgia,” explains deputy director Nicolas Coutant. “But we try to be objective and show things through a clear lens. For example, when universal education was introduced under the Third Republic, it was for everyone but it was only primary education. We have a reconstruction of a classroom from the time of Jules Ferry, and we hold exams there. We use the original exam papers and let people take the certif (see below). It’s interesting because although everyone knows what it was, only people born in the 1950s or earlier will actually have it sitting. Getting people to experience the exam is important, but we are trying to go further. We explain that only the best students were even allowed to take it, so there was a lot of inequality at that time.

Teaching boys and girls in the same classroom took many years to become established, he explains. “Mixing has always existed in small rural schools, where they did not have two teachers and two classrooms, but it took years to arrive in the big cities.

Many school museums are very small and run by local authorities and/or voluntary associations, so opening hours tend to be sporadic. It is therefore advisable to ring them when planning a visit. If you want to take part in a class, which is really the most fun part, it is essential to book in advance.

“My classes are very popular,” says Jean-Marie Richon, who leads sessions at the Old School of the Hamlet of Lamarque-Lagruère (47) southeast of Marmande. “I’m 76 but still working!” Sessions in the 1950s classroom include dictation, primary school exams, mental arithmetic, writing tests, morals, singing…and they also have games. Students write with fountain pens using traditional purple ink, some wear traditional school smocks, and old-fashioned punishments and merit points are especially popular. There is a good picnic spot nearby and you can combine your visit with a river trip.

While you are in Lot-et-Garonne and on the trail of a good dictation, there is another Museum of the old rural school in Saint Pierre de Buzet. It is a faithful recreation of the school from the 1950s and is actually in the original school building.

Under the sun of PACA (Provence-Alpes-Côte d’Azur), Toulon has a small but fascinating school museum in its historic center, the Toulon School Museum. Founded in 2018 and run exclusively by volunteers, the 1950s classroom, equipped with individual wooden desks, is open on Saturday afternoons and admission is free. Prepare to use purple ink and show off your best handwriting.

The real teaching in Toulon is however maritime. The harbor is in the center of town, and the best way to get a sense of it is on the small ferry that runs between the harbor and the harbour. Tickets cost just two euros and are valid for one hour, allowing you to come and go if you just want to enjoy the water and see the military ships a little closer.

Combine that with a trip to the Maritime Museum and you’ll definitely start to feel like old salt. The museum explains France’s naval history (they scuttled the fleet here in WWII rather than let it fall into Nazi hands) as well as the history of the port. There is also an interesting section on making ropes.

After crossing the port by boat and visiting the museum, you will be ready to appreciate the events of the Liberation. Take the Scarlet cable car to the top of Mont Faron and visit the D-Day and Liberation of Provence Memorial. The guided tour is very informative, giving a clear picture of what happened during this Landing, often overshadowed by the Normandy landings.

The School museum in Montceau-les-Mines (71) is larger than most and has a classroom from 1890/1900 as well as one from the 1950s. It also has a large room displaying all kinds of information and extensive archives. An interesting development in this mining region between Dijon and Lyon was the opening in 1923/24 of specific schools for the children of Polish miners, who were offered work due to the shortage of labor after the First World War.

They were taught in Polish and French, by Polish and French teachers. In 1926, there were 1,040 children in nine Polish schools, increasing to 1,380 children in 1931. The provision of Polish schools was supposed to facilitate workers’ eventual return to Poland, but most people remained. The schools remained open until the 1980s. The museum also offers dictation lessons and other activities. It is open the second Sunday of each month, except July and August.

In Brittany, the Bothoa School Museum dates back to 1930, and even includes the teacher’s house. You can register for dictation, morals and you can even pass your certificate. Created in 1866, the primary school certificate tested reading, writing, spelling, math, and the metric system. Passing it has become a passport to employment and social mobility and around 20 million students have passed it. From the 1960s, it was gradually abolished in favor of the baccalaureate, and in 1971, it was reserved for adult learners. The certificate was finally abolished in 1989.

There are other brilliant school museums all over France, many in small villages, but also in cities like Lille, Troyes, Perpignan and Nantes. Once you get that scent of purple ink in your nostrils, you won’t look back.

A 3D replica of 33,000-year-old rock art will be exhibited in Marseille

From Dior to berets: Seven addresses in France for fashion lovers

Magical visit: Discover the most spectacular museums of illusion in France

The legacy of La Poste: tracing the French post through the ages