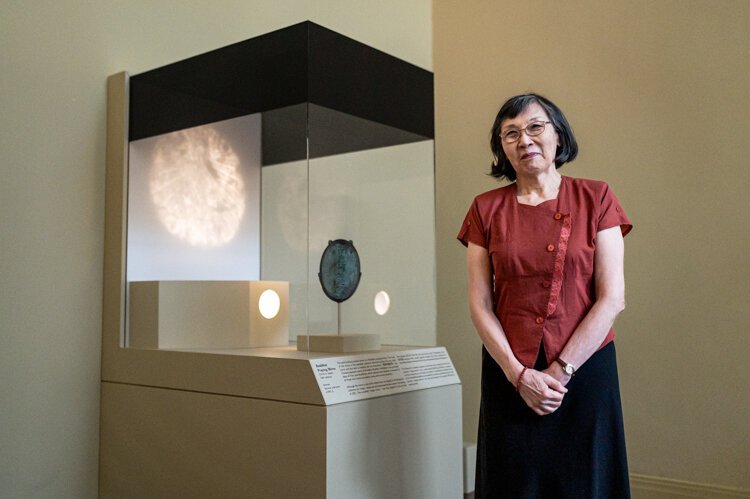 Behind every work of art hides a story. Sometimes these stories have not been known for years.

Hou-Mei Sung, one of the museum’s curators, discovered an ancient artifact, long stored in the museum’s warehouse, which tells the story of a people, a religion and an era of story. A bronze mirror, dating from the 16e or 17e century in China, was designed to display the image of a Buddha when exposed to direct light. It is a so-called “magic mirror”, with its interior bronze surface carefully and subtly welded so that the image of a Buddha surrounded by emanating rays of light manifests when illuminated in the right way.

Sung discovered magic almost by accident. Last year, she was redesigning an exhibit in the museum’s Buddhist gallery and looking for a relevant artifact to include. She recalled the mirror, which was actually on display in 2017 as part of a special exhibit of ancient Japanese armor. While researching the mirror before writing a new description of it, she discovered that a similar mirror was in the possession of the Metropolitan Museum of Art in New York. They called their magic because of the hidden Buddha image. Maybe the Cincinnati Mirror was magical too, she thought.

Working with a museum conservator, she tested the mirror, shining a light on its surface. The Buddha appeared. “I never realized it was magic,” she says.

Ancient magic mirrors are extremely difficult to craft and very rare, Sung says. Only two other similar Buddhist mirrors from this period are known: one is in the Tokyo National Museum and the other in the Metropolitan Museum of Art.

On the back of the mirror are six Chinese letters, which spell out the name of Amitābha Buddha. “‘The Buddha of Infinite Light’ is the translation,” Sung said. “If believers call on the name of the Buddha, you are saved. That’s why the name is on the back.

She believes the museum acquired the mirror in 1961, but it was likely brought to Cincinnati long before that. The museum began collecting East Asian artifacts in 1881, Sung says, but museum curatorial standards were different then, and many objects from that period contain little information. This is where the curator’s research and detective work comes into play.

On the back of the mirror are six Chinese letters, which spell out the name of Amitabha Buddha.“I’m always researching,” she says. “These kinds of discoveries are very exciting.”

The museum’s collection of East Asian art and artifacts is very large, too big to display it all. At the end of the 19e century, Cincinnati was a thriving commercial hub, an industrial city with wealthy collectors, civic leaders, medical missionaries and others who were able to explore Japan, China and other East Asian countries. East in the Far East. They brought back important and rare items that are no longer collectable these days, Sung said. Many of these were eventually donated to the museum, gifts that shaped the core of its East Asian collection.

“It’s the most exciting part of my job,” she says. “Discovering stories behind the art.”

She recalls finding two ancient Japanese suits of armor in the collection that had no identification tags or numbers that could have indicated how and when they were acquired. She went to work. After some research, she discovered that they had been bought in order to raise funds for two Japanese girls to come to the United States. The coins were sold to raise enough money for them to attend medical school, and eventually both became doctors.

The Buddha mirror, she says, was created hundreds of years ago to give people a blessing. “I think it will give our city and our museum a blessing,” she says.

New discoveries of a different kind also await visitors to the Art Museum. Think of the Roaring Twenties, the Art Deco period and over-the-top artistic furniture. The museum has preserved and exhibited a sumptuous bedroom designed by a Viennese architect in the 1920s. Joseph Urbain was a prolific illustrator, set designer and architect trained in Vienna at the turn of the 20e century. He embraced the modern art of the time. He moved to the United States in 1911 to become the artistic director of the Boston Opera. He became a sought-after set designer, working in film and architecture. He has created sets for the Metropolitan Opera, the Ziegfeld Follies and Hollywood films; worked on the Chicago World’s Fair in 1933; designed interiors for Mar-a-Lago (yes, that one, built by Marjorie Merriweather Post in 1927); and the roof garden of the now demolished Gibson Hotel in Cincinnati.

In one of his last commissions, he designed a bedroom for 17-year-old Elaine Wormser, who lived with her parents in Chicago’s prestigious Drake Tower. The The Wormser Room features striking color and pattern combinations, black glass walls and a reflective silver ceiling, a dramatic design now known as Art Deco.

When she married Thomas Reis, they moved to Cincinnati and brought with them the opulently designed bedroom, including custom carpeting. The pieces of the piece were donated to the museum by Elaine in 1973 and now form the largest collection of urban design furniture held by a public institution, according to the museum. Élaine died in 2007.

In addition to the bedroom, the exhibit features drawings, paintings, costumes, and related furniture from other American collections. It is curated by Amy Miller Dehan, curator of decorative arts and design at the museum.

For decades, public understanding of the piece was based solely on black-and-white photos, she says, which did not display the color, pattern and finish combinations the Urban designer was known for.

“The process of rebuilding the hall was an eye opener,” she says. This exhibit will help reveal Urban’s contributions to American modernism, “as well as the bold message that women like Elaine Wormser projected by choosing avant-garde style over retrograde historical fashions,” she says.

“Unlocking an Art Deco Bedroom” by Joseph Urban will be on view until October 2 in Galleries 232 and 233. Tickets to the exhibit are $12, with discounted rates for students, children, and seniors. Admission is free for members. The exhibition will be free every Thursday evening from 5 p.m. to 8 p.m. It will also be visible, free of charge, during Art After Dark on the theme of the Roaring Twenties on Friday July 29 from 5 p.m. to 9 p.m.

The magic mirror can be seen for free in the museum’s East Asia gallery (Gallery 140).

These 5 Norwalk Museums Are Kids Free On Mondays