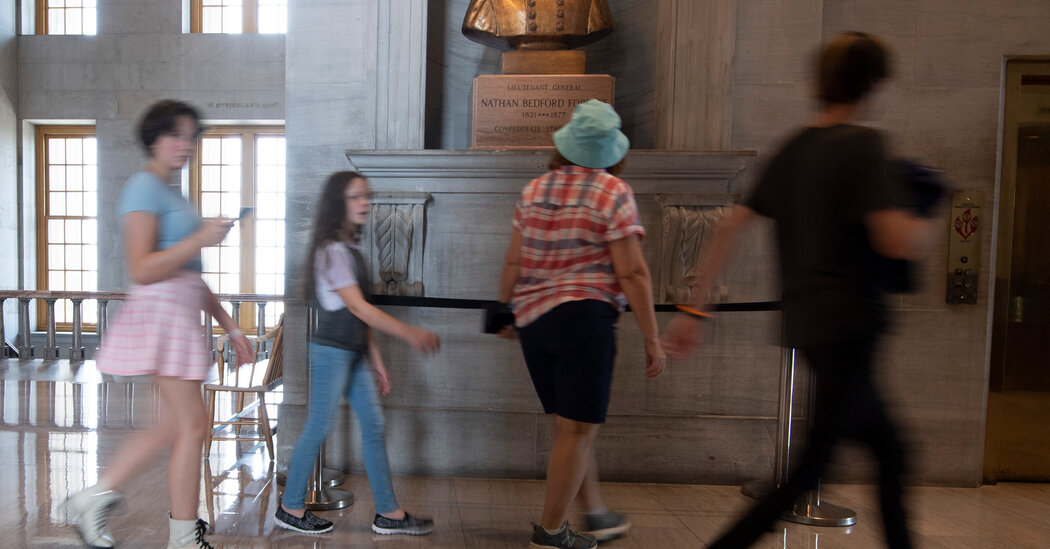 After years of protests, the bust of Nathan Bedford Forrest, the slave trader, Confederate general and first leader of the Ku Klux Klan, was removed from the State Capitol in Nashville on Friday and sent to the Tennessee State Museum, said state officials.

The operation also included the removal from the busts of Admiral David Farragut, the first chief of the US Navy, who served in the Union Army during the Civil War, and another Tennessean, Admiral Albert Gleaves, a World War I commander and naval historian.

The move came after the Tennessee State Building Commission, whose Republican Gov. Bill Lee voted 5-2 Thursday in favor of relocating the three busts. The removal of the two admirals was intended to avoid singling out the Confederate general.

“This process has finally come to an end,” Governor Lee said in a statement after a year of working for the removal.

Before the Civil War, Forrest owned, bought, and sold slaves in Memphis. As a general, he led a notoriously gruesome slaughter of the Black and White Union troops who surrendered to Fort Pillow in 1864. And after the defeat of the South, he became the original great wizard of the Ku Klux. Klan. Later in life, his supporters say, he delivered a speech in favor of racial reconciliation.

At the Capitol, his bust had rested opposite that of Admiral Farragut. “In tandem, these two men represent the push and pull of our state’s history and the conflict that has forged so much of our identity and role in the search for a ‘more perfect union'” Mr. Lee said in a statement last year when he began the kidnapping effort.

The governor said last year that Forrest “is as much a part of our past as David Farragut, the first chief of the United States Navy.”

Governor Lee added Thursday, “The State Museum provides the full historical context for these figures, as we remember our state’s rich and complex past.”

Friday’s move followed the move last month of Forrest and his wife’s remains from a Memphis park to a Confederate museum 200 miles away. The couple had been buried under a marble plinth in the park since 1905.

The busts, estimated to weigh up to 3,000 pounds each, will be on display at the museum from July 27.

“Museums preserve historic objects to make connections to the past and provide public spaces for reflection,” Ms. Howell said in a statement.

Tre Hargett, Secretary of State, joined the governor in voting to expel Forrest from the seat of government in Tennessee; Jason Mumpower, the comptroller of the state; David Lillard, State Treasurer; and Butch Eley, the finance and administration commissioner. The two state representatives on the commission who voted against the withdrawal were Lt. Gov. Randy McNally and Speaker of the House Cameron Sexton.

In a statement, President Sexton noted, “Trying to judge the actions of past generations in terms of today’s values ​​and the evolution of societies is not an exercise that I am ready to do, because I think it is counterproductive. “

He added: “It is much more productive to learn from our past and not repeat the imperfections of the past.”

Mr. McNally noted in a statement, “I think the context is necessary, but not the withdrawal.”

“No one is claiming that Forrest is not a problematic character,” he continued. “He is. But there is more to his story.

He added: “The awakened crowd ultimately means uprooting and rejecting not only symbols of the South, but American heroes and history as well.”

Activists who had spent years demanding the removal of Forrest’s bust attended Thursday’s vote, where they applauded the decision.

“This statue is a reminder that we still have work to do”, one of them, Justin Jones, told WTVF-TV on Thursday, before standing in front of the bust and saying, “Time to go.”