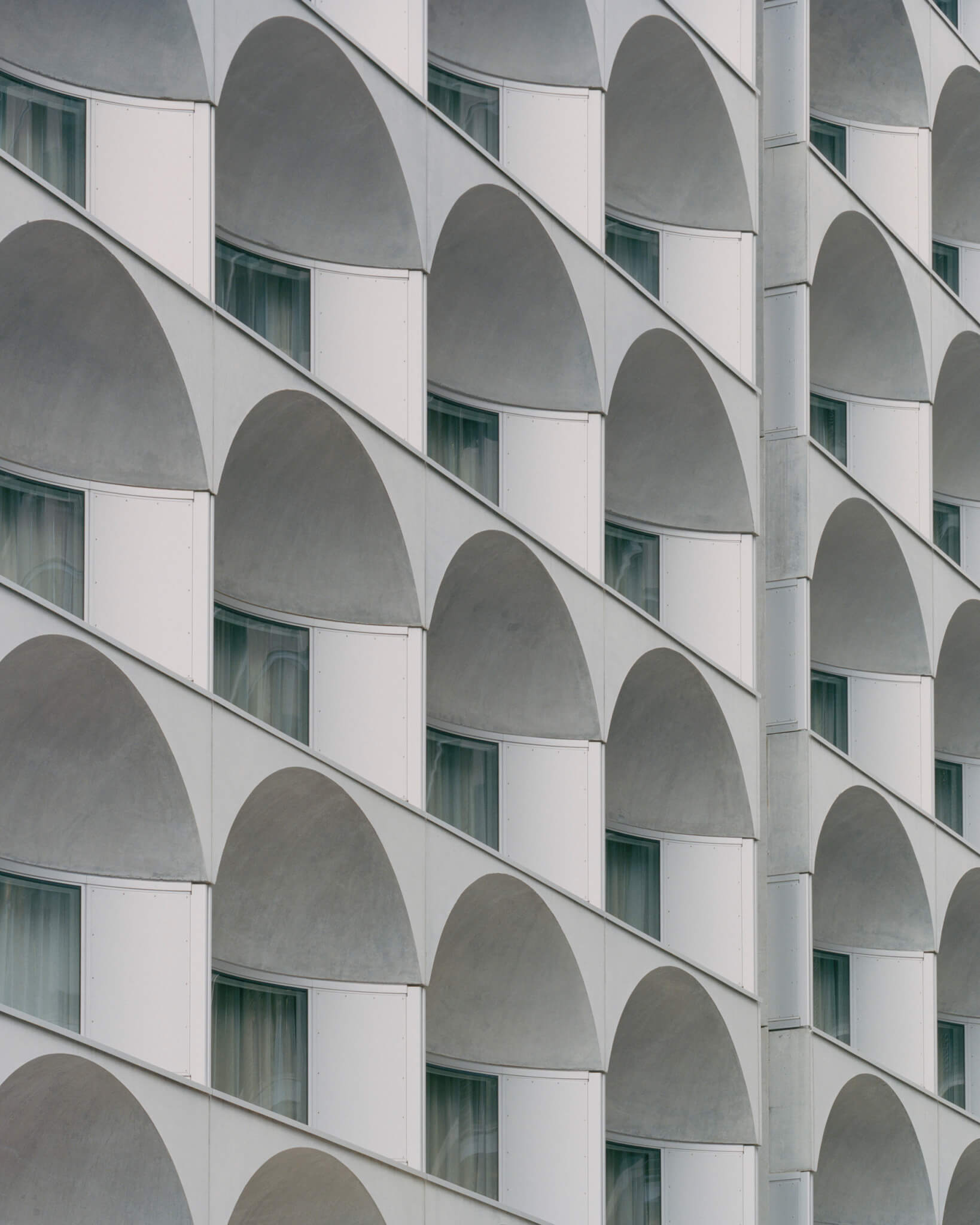 Located one block from Sydney’s Hyde Park in Australia, 116 Bathurst Street brought a façade of apses and arches to the city. Also known as The castle, the 37-story tower contains commercial and residential space, in addition to a hotel. The design competition for 116 Bathurst began in 2013 and the building was completed this month after a four-year construction process.

The castle is formed by a 10-storey podium adjacent to the historic Porter House with a tower extending from the cantilevered podium above the Porter House. The Porter House is a 142 year old heritage listed building, which served as the inspiration for the design of the castle. A cast-in-place concrete bridge, with an open walkway below, connects the two buildings. This allows customers to go between the reception and public areas – located in the porter’s house – and the rooms, located in the new podium. The shop on the ground floor separates two entrances, accessible from the neighboring streets. The top five floors of the tower are set back in accordance with regulations on the city’s solar access height plans near Hyde Park and contain stepped gardens.

The podium facade was constructed with edge ribbons of bent-in-place concrete slabs on the south and east sides of the building. The window systems are housed between the ribbons, constructed from aluminum panels and glazing. The north and east facing facades adjoining the Porter House contain a section of the building’s exposed concrete core and a unified curtain wall constructed with sections of fiber cement infill panels. The adjoining facade of the Porter House is complete with the bridge, the facade of which is characterized by steel-framed glazing. The podium’s scale was designed to be consistent with its urban context, “anchoring the building in a uniform and simple expression so that the corner takes precedence,” said Angelo Candalepas, director of Candalepas Associates, and Jason Williams, principal .

The facade of the residential tower was constructed with arched and flat precast concrete elements, as the forms of apse and podium arch are continued, albeit in slightly different proportion, on the facade of the tower overlooking the street. Aluminum frames frame the glazing, which contains up to eight types of insulated glass units, on the north, south and east faces of the tower. The west-facing façade was constructed with “load-bearing precast concrete and a unified curtain wall, with a combination of fixed and casement glazing, and louvered windows for natural ventilation of common areas”. As Candalepas and Williams said A, “the materials and shapes chosen for the building were inspired by the surrounding heritage buildings and setting.” The shape of the apse-shaped windows is inspired by the arches of the Porter House, with the historical form adapted with contemporary materials. Candalepas and Williams said they had considered fiberglass reinforced concrete when developing the design, but cast-in-place concrete was best suited for durability, maintenance and Sydney’s climate. .

Candalepas and Williams noted that while concrete became the obvious choice, it proved to be a “difficult” construction process because pouring errors could not be concealed. The deflection of the formwork resulted in a higher degree of deflection than expected, which complicated the on-site installation of the factory-built window modules. However, the uniformity of the resulting facade is consistent throughout the building.

Candalepas and Associates works with facade engineer, Surface Design, and subcontractor, G.James, prior to construction documentation, reviewing shop drawings early in the design process. The design team worked with the main contractor, who built full-scale prototypes of the facades for durability testing.

The design team considered a range of environmental factors for the facade, contributing to an “efficient use of resources”, in the words of Candalepas and Williams. They pointed out that the light color of the concrete and the panels, as well as the protection applied to the glazing, improved passive solar gain. All windows were double-glazed, and the living rooms in the residences faced north to “minimize unwanted access to the western sun”. The overall design and orientation of the façade has maximized natural lighting, which will limit operational energy costs in terms of heating and artificial lighting. Environmental considerations have also been taken into account in the tiered garden, which has been planted with native species, can absorb rainwater runoff and will reduce heat gain at roof level.

Rather than adding environmental considerations to the building in pieces, the design of the castle remains consistent across its faces. While the apse motif carries the tower above the podium, perforated aluminum panels encircle the east-facing facade of the tower, giving a more modernist look to the faces of the residences.

Reflecting on the ‘rich history’ of copper mining at Bingham Canyon