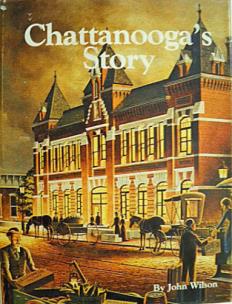 The recent announcement that the Chattanooga Read House Hotel had reached its 150th year of operation inspired this story. Mention has been made of several world-class personalities who had spent at least one night there – perhaps the most important of whom was Sir Winston Churchill, Britain’s famous wartime Prime Minister. Mr. Churchill no doubt came to Chattanooga by train, descending on the pre-Civil War platform of Union Depot before rushing through the always busy 9th Street (now MLK Blvd) to a friendly Read House accommodation.

What? You mean there were once two train stations in downtown Chattanooga? Yes, that’s right, and this one was owned by the Louisville and Nashville Railroad, although at one time it also shared space with the Nashville, Chattanooga, and St.

Louis RR. (NC&St.L) It had a large arched canopy over a concrete pad that once housed wounded soldiers brought from the Chickamauga battlefield, bound for hospitals in Nashville. Big changes were happening at the time (1970s) both in Chattanooga and nationally as the railroad industry sought to get rid of passenger trains. (Freight did not complain or sue while passengers did.)

Ninth Street (now MLK) was still a narrow street in the early 1970s, no wider than 6th, 7th, 8th, and all other numbered streets. A new project, the “Golden Gateway”, however, was set to change 9th Street forever, as it was to be widened, and the first notable addition to the new gateway was the Olgiati Bridge. It was to be the first segment of the new U.S. Highway 27 conduit that would bring automobile traffic directly into the heart of Chattanooga – with its main exit on 9th Street. Changes were also made at West 3rd Street, although these widenings were not as drastic as at West 9th.

These widenings along 9th Street were quite devastating, involving many traffic diversions, as a whole range of thriving businesses had to disappear. These included demolitions on both sides of the street: a whole row of pawnshops, First Federal S&L, People’s Studio, Readmore Books, etc., etc. Between Chestnut Street and Georgia Avenue, it looked like a bombed out war scene for years! Only a few venerable businesses like the Read House were left intact – but Union Depot was doomed. A very historic brick building of Victorian architecture, it was actually listed on the National Register of Historic Places. I was extremely flattered when John Wilson, owner and editor of this online journal, asked if he could use my painting for one of his first books (now in reprint).

Years passed and when all the work was done along the now widened 9th Street, it was noted that Thomas (Tommy) A. Lupton had acquired the old Union Depot site and constructed a large building of modern offices in its place. He named it the “Tallan” building, cryptic initials meaning “Thomas A. Lupton, Louisville And Nashville”.

Meanwhile, the other unused railway station on South Market Street has been purchased by another the wealthy Chattanooga family who converted it into a resort hotel. I vividly remember this “Chattanooga Choo Choo” resort from its days as a proper railroad station since it was the starting point for my journey to San Antonio, Texas, and my four years of service in the ‘Air Force. It’s also the station where I hosted my cousins ​​from Alabama who visited us in 1947 – with clouds of locomotive engine steam swirling all around. The stations were always full of activity, optimism and good feelings! Uniformed porters pushed heavy handcarts across the platform, moving loads of luggage to or from baggage cars or the station itself. Mail clerks, conductors, engineers, and railroad firefighters were commonly seen when changing shifts. Taxis waited at the entrance to the station, and several nearby hotels accommodated both travelers and railway personnel who needed a rest between the tiring stages of the journey.

Extremely rich and extremely poor people shared the same facilities on these passenger trains, as daytime accommodation was about the same for both types. The wealthy might be able to afford the services of a dining car by day or a Pullman sleeping car by night, but the seats were pretty much the same for everyone. Some trains had air conditioning and some did not.

Chattanooga has long been considered the midpoint between New Orleans and New York, paralleling the Lee Highway (US 11) for much of the distance. There were great connections here to all destinations in the US, Canada, Mexico and even Cuba. (My mother, who worked for the NC & St.L Railroad, took such a trip with my grandmother, which included ferry service between Florida and Havana.) And, back then, you wouldn’t couldn’t drive your car in any direction in Chattanooga without having to cross the train tracks.

How significant it must have been when sweaty farmers of long ago interrupted their hard work in the fields for a few seconds just to listen to the distant whistle of a train! It had to have a reassuring sound that let them know there really was a big crowd there. My own dear father was six years old in 1890 when the TAG Railroad was built through Walker and Chattooga counties in Georgia, and we have preserved the chairs he and his brothers turned into toys like mighty steam engines . Imagine a world without automobiles, radios, televisions or electricity, and you may be able to understand the powerful message of the “iron horse”! It must have affected everyone at that time, just as the marvels of high technology impress us today, and as evidenced by the popularity, years later, of all “train songs”, especially by singers such as Johnny Cash, Jimmie Rodgers, Hank Snow, Boxcar Willie and many more. No wonder Glenn Miller made such a memorable hit recording “Chattanooga Choo Choo”! I realized that even German troops could be heard singing it behind enemy lines during World War II. My wife and I were once in a restaurant in Budapest, long after that war, and a lively gypsy band played it for us without the need for rehearsal. .

But returning for a moment to “our” Read House, I have long since realized that its original name was the “Crutchfield House”, dating back to the days of the Civil War when the streets of Chattanooga were all muddy, no paved and with wooden sidewalks. It turns out (pardon this genealogical digression) that there is a Crutchfield cabin in Chickamauga Park that almost certainly has ties to the Chattanooga Hotel of that name. And there is also a Brotherton cabin in the same park. It also turns out that two of my distant Martin cousins ​​married into these two families – which really makes me feel good to have such close ties to local Chattanooga history.

Please note that the dust jacket painting on Wilson’s book was done while the actual Union Depot was being demolished in the 1970’s. This is a view I picked from 9th Street just next door from the entrance to Read House. The book has recently been reissued, only without the dust jacket, and is another addition to John’s impressive list of publications – each of which make great gifts!

Opening of a new traveling exhibition at the Weirton Museum | News, Sports, Jobs