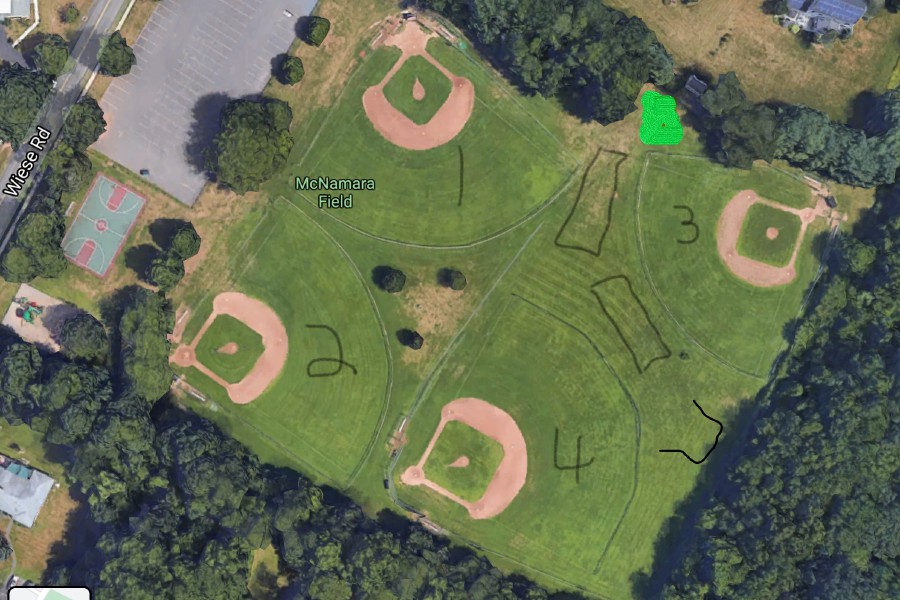 In the spring of this year, the Cheshire Reds Youth Travel Baseball Program was pleased to have field conditions addressed at McNamara Legion Field. Before the organization began its 30th season, the City of Cheshire brought in Championship Turf Services to work on the complex’s Four Diamonds at 550 Wiese Road and also purchased a new fence for the Mac 4 pitch.

This fall, the Cheshire Youth Baseball organization is pursuing other plans ahead of the 2022 season. After discussing different ideas for McNamara, the Reds decided they would like to build dugout canoes, set up batting cages, and build a batting area. storage for clay and earth for grounds maintenance.

At a meeting earlier this year, Reds Vice President Jim Gidicsin told Cheshire City Manager Sean Kimball and Cheshire Parks and Recreation Director John Gawlak that the volunteers would be willing to provide labor if the city gave them a budget for materials.

“We have to wait until they give us the green light to start making improvements,” Gidicsin said.

The Reds were hoping to talk about plans in August, but a meeting has been postponed. Officials now plan to schedule a meeting with Gawlak this week. Before the discussion, Gidicsin sent out a flyer of what they would like to do this year.

Gawlak said he supported the improvements, but added that action must be taken before the work can be done.

“This year, the Mac 4 lot had a temporary fence installed instead of a permanent fence. There’s a neighborhood at the back (of the park) and we want to make sure it’s acceptable to work there, ”Gawlak explained. “Once everything is checked, we can look at our options. “

Iron Workers Local 424 in New Haven contacted Gidicsin to help them set up canoes in McNamara. Gidicsin added that one of the Reds’ officials is an entrepreneur and will see if he can donate materials as well.

Prior to his meeting with the Reds, Gawlak spoke with fieldwork workers.

“I try to be careful not to do things that interfere with the work of different unions,” Gawlak said.

He also wishes to discuss the preservation of the fields with the organization of the Reds.

“In the past, the maintenance of the fields was mainly done by volunteers. We would like to talk about working together to keep things running smoothly, ”Gawlak said.

Gidicsin said the money will decide how many projects the Reds can complete this year, but the organization would like to install dugout canoes on the benches at McNamara’s four pitches.

“We would just be putting a roof over the existing structure,” Gidicsin said.

In their pitch plan, the Reds hope to place batting cages between Fields 3 and 4 and Fields 1 and 3.

“I think the batting cages would require more work than the dugouts,” Gidicsin said.

Gidicsin said a storage facility could also be built at the rear of the park. He added that if everything falls into place, the Reds are considering Nov. 7-8 to start working.

In addition to trying to collect materials, the Reds have received nearly $ 4,000 in donations since former coach Greg Mostoller passed away on May 5. Mostoller’s wife Theresa reached out to CYB President Randy Bellair to tell him that she is asking friends and family to recognize him by giving back to the baseball organization.

“I had a conversation with her about Greg’s experience with the Reds,” Gidicsin said. “He was very passionate about working with the boys, and she felt he would have appreciated the money being reinvested in the program.”

Mostoller coached the Reds’ schedule from 2006 to 2012-13. Gidicsin got to know him because they both had daughters who competed in the Cheshire Y / Sea Dog Swim Club.

“We spent time in the same places,” Gidicsin said. “He cared about giving back to the community. “

If the Reds receive approval for the dugout project, the organization plans to somehow recognize Mostoller early next season. Gidicsin said ideas like dedicating canoes or a field came up at a meeting.

As part of CYB, the Reds are open to residents of Cheshire and students who attend the town’s school. In September, the program organizes trials to choose the players.

Next year, the Reds will have five teams ranging from levels 8-U to 12-U. Teams compete in several leagues.

“We usually try to contact the players in early October,” Gidicsin said.

Right now, officials are contracting with winter training facilities. Gidicsin said the teams could strike once a week at D-BAT Cheshire Training Center this year.

“We typically have two workouts a week in the winter,” Gidicsin said. “We hope to use a gym again. Due to COVID, we have not been able to train for the past two years. “