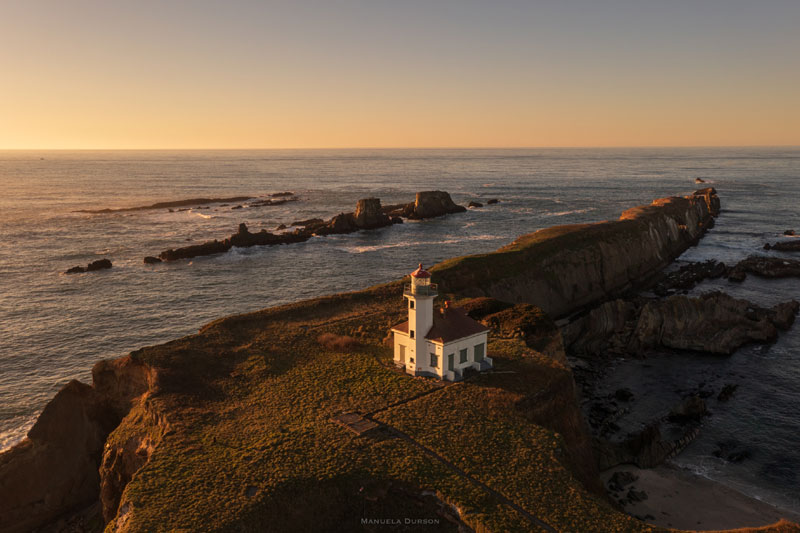 Tales from the End of a South Oregon Coast Lighthouse: Chief’s Island and Arago Light

(Charleston, Oregon) – On August 3, 2013, there was a significant moment in Oregon Coast history that is now somewhat under the radar. It was when the local tribes recovered something valuable that had been stolen from them some 150 years before. Cape Arago Lighthouse – near Coos Bay – originally known as Chief’s Island, was ceded to the Confederated Tribes of Coos, Lower Umpqua and Siletz. In a ceremony led by Captain Mark Reynolds, Commander of Coast Guard Sector North Bend, the promontory which had housed a lighthouse since the 1860s and even a Coast Guard station for a time returned to good hands. . (Cape Arago Lighthouse near Coos Bay, courtesy Manuela Durson – see Manuela Durson Fine Arts for more)

European history around this southern Oregon Coast landmark dates back to 1778, when Captain Robert Cook passed by and named the spot Gregory Point. Regional tribes date back much further here. According to carbon dating, Chief’s Island was occupied by humans between 1,500 and 2,100 years ago.

Chief’s Island / Gregory Point has a variety of stories to tell.

The area was named Chief’s Island by the local tribes as it was traditionally where the chief had his abode. Yet there are many signs that it has been an intermittent village over these 1,000 years or more. It is a known archaeological site, which partly explains why it is considered so important.

Going back even further, the island is made up of a kind of sandstone and geologically unstable. Some predictions see the area with the lighthouse collapsing over the next decade.

The last days of the island in the hands of the United States illustrate this fragility well. According to a 2005 article in the Statesman Journal, a local had seen a new hole in the area emerge. A storm in February of that year brought it to notice. Waves started crossing to the other side, and suddenly you could see across the small island.

At the time, the Bureau of Land Management said you could throw millions of dollars at the thing and it would still go down.

Nearby, on the cliffs overlooking Lighthouse Beach, an elderly woman witnessed the instability of this area. The cliffs are made of the same material as Chief’s Island.

Irene Quick had bought land by the sea there in the 1940s, starting by building a cabin there. Running water didn’t come until the 1970s, so for thirty years they had an addiction to what was called a “million dollar view” of the lighthouse. A full house was eventually built, but in the meantime the cliffs continued to erode. 35 feet has disappeared over the decades, even taking the outhouse with it.

The lighthouse itself was a victim of this collapse. At least one of the structure’s reconstructions was tied to erosion of the area, forcing officials on the Oregon coast to rebuild the next one back.

Quick was 90 when the Statesman Journal spoke to him. She also recounted another tantalizing tidbit: Chief’s Island was sometimes still walkable during extremely low tide events.

The bridge over Cape Arago Light, decades ago

In the mid-2000s, she was lucky enough to be one of the last people to cross the rickety bridge to see the lighthouse. At that time, it had been closed for years. This was largely due to the archaeological importance of the place, the fact that it was sacred to the local tribes because so many ancestors were there, and security concerns. In the bridge’s later years, however, it was dangerous, fragile, and slippery. Even local tribes had to obtain permits to cross for ceremonies or visits with their ancestors.

A group in November 2003 was one of the last forays across, and according to reports, the Coast Guard only allowed two or three at a time to walk across this unstable bridge.

For a time, charter boats were closing in to get a better view, but were not allowed to make landfall.

While the Cape Arago Lighthouse was listed on the National Register of Historic Places in 1993, its days as a visible attraction were numbered. Even then, the process was slowly brewing to bring it back to the tribes and cut off all access. In the early 2000s, this process began to move forward in earnest, slowly moving through Washington, D.C.

The light was deactivated in 2006.

In 2012, a year before the signing ceremony, the bridge was finally dismantled. Just prior to this, Coast Guard Engineering Officer Lt. Jennifer Lopez was interviewed by The Associated Press saying the lighthouse was being repaired and ready for retirement. The walls were repaired, sealed and repainted to improve its condition and make it watertight.

So you want my job as an artist: museum preparer