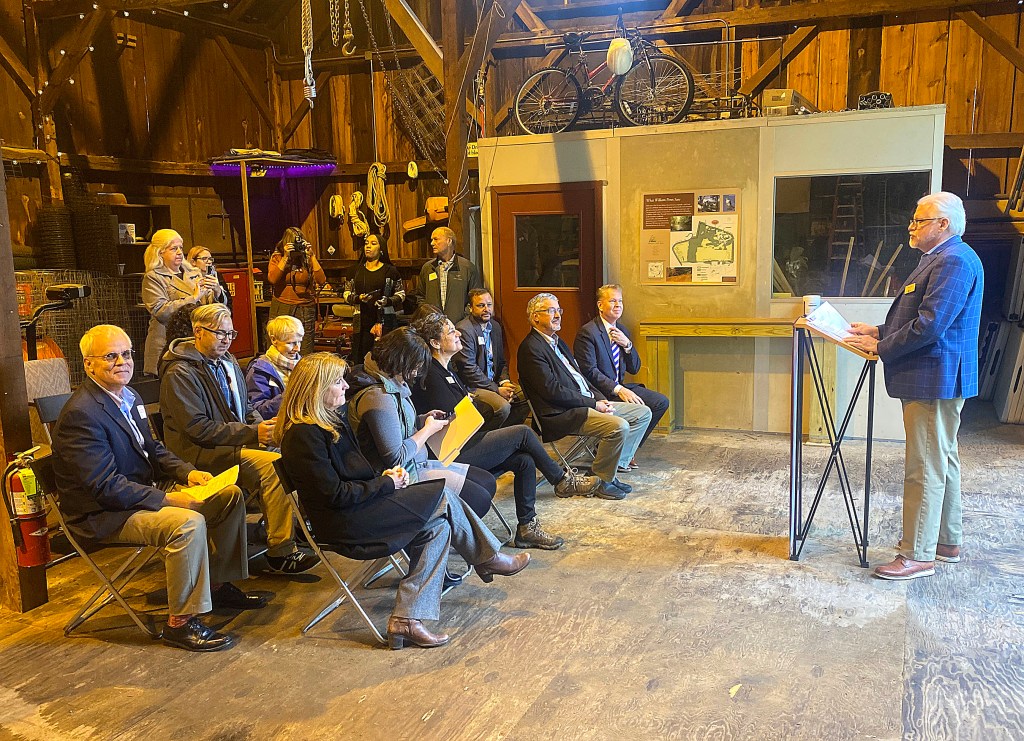 MARPLE — Conservation groups gathered Wednesday under the guise of an 18th-century barn at Natural Lands’ Hildacy Preserve to celebrate $640 million in new investments in conservation projects included in the state budget of Pennsylvania this year and to thank the bipartisan group of politicians who helped Make It Happen.

Natural Lands chairman Oliver Bass said the investment was a long-sought goal that would support environmental stewardship in the Commonwealth.

Bass pointed to the red bicycle and helmet hanging in the rafter that once belonged to Bill Brainerd, a committed environmentalist. Bass said Brainerd “walked the walk” when it came to the environment, was known to ride his bike on the twisty roads near Hildacy Preserve and for miles to attend meetings in rain, snow and thunderstorms.

He died aged 84 earlier this year.

“What Bill meant to me more than anything was the importance of doing the hard thing even when people are looking at you and saying why. That’s what we’re here to celebrate,” Bass said. “We are here to celebrate the State Legislature, a bipartisan group of people who have done the hardest part and we will all benefit from it for generations, so thank you.”

Kearney noted that the legislation is effectively a renewal of funding for old state programs.

• $220 million in Near Clean Flow Funds, which would reinstate the Agriculture Conservation Assistance Program and Clean Water Program to improve watersheds

• $105 million in the PA’s small water and sewer program, which will address urgent infrastructure issues and stormwater management.

• $100 million to the Department of Natural Resources, creating three state parks and repairing hundreds of miles of trails

• $125 million for the Whole House Repair Program to help low-income people repair their basic home systems to stay in the home and maintain existing housing stock.

“Everyone here knows it’s definitely worth the investment,” Kearney said. “Thank you to every organization and every member of the conservation community for fighting for these investments and pushing us to do the right thing.”

Quinn, who co-sponsored the bill in the House, said he had supported the ideals of Growing Greener for years, but it was an arduous process to win over more members of his party.

Quinn said many upstate officials are interested in the Clean Streams program, which helps farms that have helped gain their support.

Quinn said the plans are now in the hands of conservationists.

“You have to come together and help us spend it,” Quinn said. “I have a feeling we have a lot of good ideas in this room.”

Cappelletti said the pandemic has reminded residents of the importance of green spaces.

“How fun our trail and parks are,” she said. “While we have stayed home to keep our family and friends safe…we have started to use outdoor spaces.”

Cappelletti said she was proud of the bipartisan effort and looks forward to more Growing Greener efforts in the future.

Schaefer said Delaware County Council members have made a unified commitment to invest in greenway programs to catch up with neighboring suburban counties such as Chester and Montgomery, which have dedicated more funds to green spaces in a recent past.

Schafer noted in 2021 that the county invested more than $7 million in Greenways grant programs. The council has a $5 million grant program underway for 2022 and a commitment of $5 million per year as well as the purchase of the Don Guanella property in Marple Township.

Schaefer said county grants and investments allow nonprofits and municipalities to leverage these grants to obtain public matching funds for projects to protect important spaces and greenways in the county. .

She noted that large land investments as well as small green spaces in local communities are vital.

“We view these investments as part of our economic investment,” Schafer said. “We understand that investing in open spaces, trails and greenways equals revitalizing our communities, and we have many communities in Delaware County that need to be revitalized.”