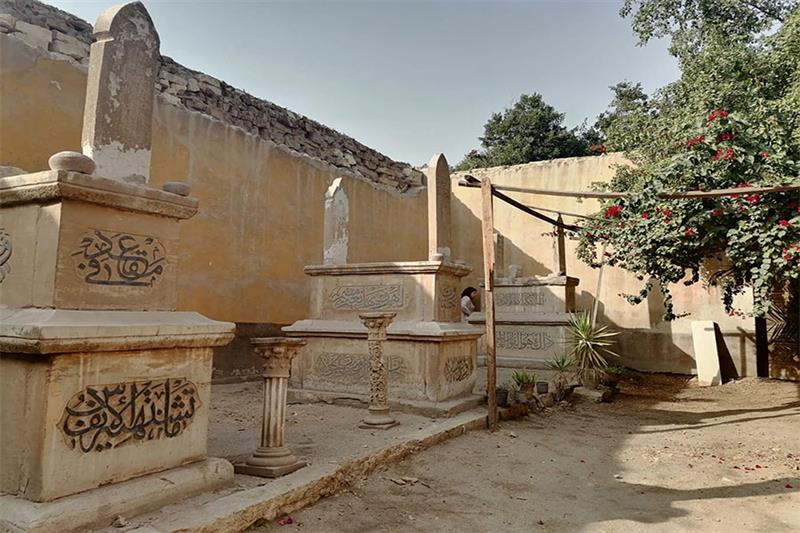 On a perfect Friday afternoon, I received a text from my cousin saying that our family cemetery was going to be demolished. The racing thoughts and panic attacks haven’t stopped since.

“Do you think my father would prefer to be transferred with his father to the new replacement government cemetery in May 15 City?” Should we bury her with Grandmaâ€¦ wait but Grandma’s cemetery will be demolished too!

In the land that introduced the concept of the afterlife into human civilization and built tombs that are among the wonders of the world, a civilization founded on the idea of â€‹â€‹worshiping the dead, the concept of cemetery demolition touches much more than the material or historical heritage monuments concerned. It breaks the old spiritual connection and communication with the dead, a connection that manifests the concept of â€œmaddad,â€ which means strengthening, assistance, support and connection. From the concept of eternity and the afterlife of the ancient Egyptians to Coptic and Islamic saints and walis, Egyptians seek “maddad” from the creator and those who have passed on to the next life, as they need to know that they are connected and protected in the presence of their creator.

About a month ago, a list was released to the mainstream media of more than 60 of the 140 family cemeteries chosen to be demolished as part of the state highway expansion plan in the region of L ‘Imam Al-Shafie, which since 1979 has been classified by UNESCO as part of Historic Cairo.

â€œFirst of all, we have not been officially notified, we have just learned from our torabia (the person responsible for the burial) that the government marked our cemeteries because it wanted to widen the street or build a bridge, â€explained Mohamed Yakan, the general secretary of the Constitutional Liberal Party, whose family owns three cemeteries, or hush (Court in Arabic), Ibn Al-fared Street in the cemeteries of Al Imam Al-Shafie.

â€œI obtained the list circulated in the media, which highlights the project to demolish 140 family cemeteries. I managed to get the exact names of 65 of them. Our cemeteries built in 1890 are one of them. They hold the remains of 50 to 60 people. How can they be buried on a 30 square meter plot? Yakan told Ahram Online.

â€œI also had access to a note from the Cairo government stating that they tried to reach the owners of the cemeteries but were unable to, and therefore the prosecution said the government should take action and initiate procedures to move the remains to other cemeteries on May 15. City, â€he added.

Thus, Yakan decided to take legal action against the government of Cairo, the Administration of Real Estate Management (Edaret Amlak), the head of the Administration of Cemeteries and the Ministry of Antiquities, because some parts of the cemeteries are considered as heritage sites. He even lodged a complaint against the Ministry of Endowments which manages the 39 feddans allocated by his family to service and maintain cemeteries.

Mohamed Yakan Cemetery is located in the Imam Shafie neighborhood on Ibn Al-Fared Street. It goes back to Ahmed Yakan Pasha, who was the Egyptian prime minister and the first director of the Misr Bank. His father Haider Yakan Pasha was the finance minister of Khedive Ismail, and his great-grandmother, Princess Fatma Heidar, who is also buried there, was the owner of the royal palace of jewelry.

â€œThere are a lot of icons buried here, defense ministers, Youssef Kamal, Nemat Mokhtar, Queen Farida, to name a few. We are erasing part of the history of Egypt, where instead we can make this region a great heritage site that reveals the last 200 years of Egyptian history, â€Yakan added.

Inside the family cemetery of the Egyptian national figure Saad Zaghloul. Photo by Amina Noshokaty

According to a report by May El-Ebrashi as part of the Historic Cairo Urban Regeneration Project, the UNESCO World Heritage Center considers Cairo cemeteries to be an integral part of the city’s history. Cemeteries, which were first built with the establishment of the Islamic capital of Al-Fustat in 642, cover six zones: El-Qarafa El-Kobra and El-Sughra (Large and Small), Sahra, Sayyida Nafisa, Bab El-Wazir, Bab El-Nasr and Zeinhom. My family’s cemetery is located in El-Qarafa El-Soghra, in the area known as Al-Imamayn during the Ottoman period and Muhammad Ali after the two Imams Al-Shafie and Al-Layth. With the decline in popularity of Al-Layth, it came to be known as Al-Imam, after Al-Shafie.

(From RL) The visitor’s card of the Historic Cairo Urban Regeneration Project (URPH), cemeteries in the heart of historic Cairo.

Tarek El-Morr, historian, architect and founder of the Historic Cairo Cemeteries Safeguarding Facebook Page, a few weeks to highlight the importance of these cemeteries and help stop their demolition.

Dig in front of the family cemetery of Egyptian actor Youssef Wahbi. Photo by Amira Noshokaty

â€œCairo’s cemeteries date back to the Islamic conquests. Stretching from Moqattam to Islamic Cairo, it became the burial place of several prominent Muslim and Sufi Walis such as Ibn El-Fared, Ibn Ataa Al-Sakandary and Imams Al-Shafie and Al-Layth. The cemetery stretched as far as Bab El-Nasr, where Ibn Al-Haitham, [known as the â€˜father of modern opticsâ€™], is buried. In the Fatimid era, the great historian Al-Maqrizi, who lived in Borgwan Alley, was buried there. Ibn Khaldoun, the founder of the science of sociology, is also buried in this cemetery. Then there is Al-Saida Nafisa, who lived during the time of Ibn Touloun. Other cemeteries were also built during the reign of Khedive Tewfiq, as the royal family began to build their cemeteries alongside the walis and Aal Al-Beit (descendants of the Prophet Muhammad).

All this history has led UNESCO to nickname this part of Cairo, cemetery included, as Historic Cairo in 1979. And despite all the history, tThe concept of relocating cemeteries emerged in 2000, when the former governor of Cairo suggested demolishing it and turning the place into a vast public garden, but it was fiercely opposed and never came to fruition. Twenty years later, in August 2020, bulldozers found their way to cemeteries in Cairo, they demolished several walls of family cemeteries as part of the road widening plans for the construction of the The Fardose (Heaven) axis, a new multi-lane highway connecting the heart of Cairo to the surrounding ring road, New Cairo and Nasr City.

And now, although it has not yet been officially announced, many bulldozers and excavations are already in action at Al-Imam Al-Shafii cemetery.

At the end of Saad Zaghloul Street is the family cemetery of Cheikh Ali Al-Noshokaty – merchant of Moroccan origin – which was first built in 1918. The family cemetery was at the top of the list of cemeteries to be demolished in order to expand the street. Guardians at the cemetery say they haven’t been officially notified, but a lot of action is underway.

“Every two days, architects come to take the measurements of the streets, then say that it is wrong and that they have to do it again”, they commented. As for the torabi, when we asked them to show us the official notice of the cemetery administration asking us to move, he never showed the papers he never officially received.

Adjacent to our family cemetery is that of famous Egyptian actor Youssef Beih Wahbi. Just outside there are a lot of excavations, which locals believe to be for water and sewer pipes, that the government is launching as a foundation to transform this place into an inhabited place with lots of cafes, according to the inhabitants. The Wahbi Mausoleum houses the tombs of the actor and his family under large and lavish marble tombstones. One of the stones bears a touching epitaph which reads: “Our daughter Bouthina, the most beautiful girl in the world.”

At the end of our street is the vast land of the family of Egyptian national leader Saad Zaghloul, who was buried there before his remains were transferred to his memorial in downtown Cairo.

â€œCairo’s historic cemeteries have historical significance. If we look at it from an architectural angle, the tombs of Mohamed Elwi and Mohamed Sabri Abu Alam were designed by Ernesto Verrucci, the architect of the royal palaces under the reign of kings Fouad and Farouk â€, explained Mostafa Sadek, doctor, photographer and specialist in cemeteries in Cairo.

“Take the tomb of Ibrahim El-Nabarawi, the chief of all doctors at the time and among the first to benefit from Muhammad Ali’s scholarship to study medicine in France. [El-Nabarawi was] a watermelon merchant in Nabarou who came to Cairo to sell his merchandise, and when he didn’t make much profit, he stayed in Al-Azhar where he was chased by Muhammad Ali’s scouts to study medicine abroad, â€Sadek said.

â€œThere are a lot of people like him buried there. There are also people who are important to their families and their own history, â€Sadek noted.

â€œThis is our heritage and I believe that there is nothing more important to us as Egyptians than the cemeteries of our families. The Egyptians care much more about their cemeteries than about their homes, because the cemetery is their final destination, â€Al-Morr said.

So, will Egypt continue to honor its dead?