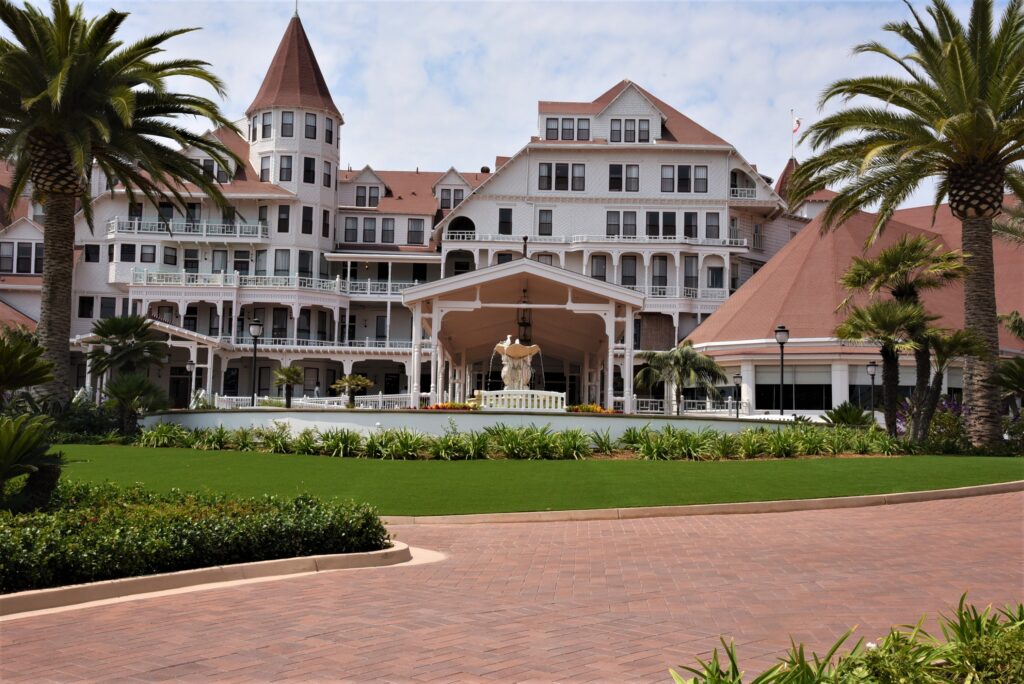 The renovation is nothing new at the Hotel del Coronado, ES Babcock setting the precedent when it began the first updates in 1902. A new step has just been taken in the restoration of the 400 million master plan. of dollars that will touch and refresh every part of the property. The third phase of this sweeping five-year renovation, this project has been carefully designed to bring The Del back to its past while making it relevant to the present. As Wealth Manager Gina Petrone commented, “The Del continues to evolve and that’s why it’s still here. What I love about this ongoing renovation is the dedication and attention to historical detail to bring her back as “Grand Lady of the Pacific” while still feeling relevant.

Guests will enter The Del at the new traffic light on Avenida del Sol and Silver Strand. The wide brick entrance leads you to the updated porte-cochere, which was originally added in 1912. The central fountain invites with a nautical theme. The renaissance of the porch adds grandeur to the entryway with white rocking chairs inviting travelers to sit and relax. The porch railing has been recreated to mimic the original with glass added for code compliance. The iconic porch can be seen in the 1959 movie “Some Like It Hot” and was removed in 1961.

The expanded lobby is opulent with new wooden floors, an original clock, updated reception space, and more. By the way, the original floor was tiled and the men would come in with their fishing waders and throw their catch of the day on the floor. The elegant chandelier was inspired by the original, but is more ornate. Other lights, interior and exterior, have been matched with original photos or inspired by the time. In the Victorian era there were also rigid back chairs with spittoons underneath, so now the new green velvet circular bench is appropriate for the time, while being more functional for today’s standards. . The green tasseled key rings are reminiscent of the days when keys were kept behind the reception desk, when today electronic key cards are used. The hand-painted silk wallpaper, called Amazonia, is inspired by the tropical fauna housed in the original garden. The reception area also has a secret carpeted door allowing employees to access the rear of the house.

Even the music has been carefully chosen to evoke a timeless ambiance. All the beautiful woodwork has been hand stripped and brought back to its original color, which has darkened over time, giving the lobby an airy feel. The historic elevator has been updated to operate manually, but will still be occupied by an operator in a stylish uniform. A mesh grating still needs to be added to complete the original inspired design.

Restoring the 200-pound Coronation stained glass window and putting it back in its original place above the lobby was no easy task. “With 700 pieces of glass, it has been painstakingly restored with just six pieces replaced to last another 100 years,” commented Keriann Martin, deputy director of marketing. She noted that there will be 25 stained glass windows when the project is complete, comprising four originals and 21 replicas, including those that will be placed above the entrance doors on the front porch.

The rooms were lined with historic black-and-white photos showing what guests’ lives were like throughout The Del’s history. A quick glance around the Signature Shop lobby revealed logo items, clothing, and memorabilia; and I was captivated by a book called “The Most Beautiful Hotel You Can Imagine” which was taken from letters and drawings of a child during his visit in 1892. Rich history abounds throughout the hotel distinct.

While this majestic new lobby is open to the public, it won’t be used for guests until later this fall, when details are complete and staff are finalized. The Del had a busy summer with July being the highest-grossing month in its history. Staff promise that it will be decorated for the holidays with the famous lobby tree, with a fully decorated lobby and porch.

Already completed in 2019, Vista Terrace, an outdoor event space near The Dragon Tree; the upscale Serẽa restaurant which replaced the 1500 OCEAN; the restoration of the laundry building; and the north entrance and the underground car park. 2020 saw the update of Babcock & Story Bar and Bakery, Pool & Solarium, Cabanas, Pizzeria & Eno Market, and Spa & Lounge. This year is the year of completion for the Fitness Center, The Views 117 refurbished guest rooms, Windsor Lawn, Ice House Museum, The Power Plant meeting space, retail shops upscale and a new name and concept coming up for Sheerwater Restaurant. The next phase, which is slated for completion in 2022, includes Founders Hall, in which progress is only just beginning, a refresh of the ballroom rooms and the Victorian building, the completion of the new event center of Southpointe and the complete Shore House complex and south parking structure.

This master plan has been carefully crafted to bring The Del back to its past while making it relevant to the present. The Del consulted with Heritage Architecture & Planning to make sure historical details were accurate, including scraping off paint from the Oxford building, scraping window frames to uncover the original shade of red and the porch ceiling which turned blue again. Wimberly Interiors oversaw the hall transformation. Hotel del Coronado is owned by The BRE Hotels and is managed by Curio Collection by Hilton.

“The master plan demonstrates not only our commitment to invest in our guest experience, but also our commitment to reinvigorate the timeless history of Hotel del Coronado,” said General Manager Harold Rapoza. “We are excited to launch this next phase of development and look forward to unveiling the evolution of this legendary resort with extensive historic restorations and enhanced guest experiences that will create memories for generations to come. “

And for even more of a look at the Del’s refurbishment, watch this video courtesy of Tony Perri and Surf’s Up Studios:

Dubai Culture highlights the services of its museums and heritage sites

The Glorious Kashmir Museum on the Road to Restoration