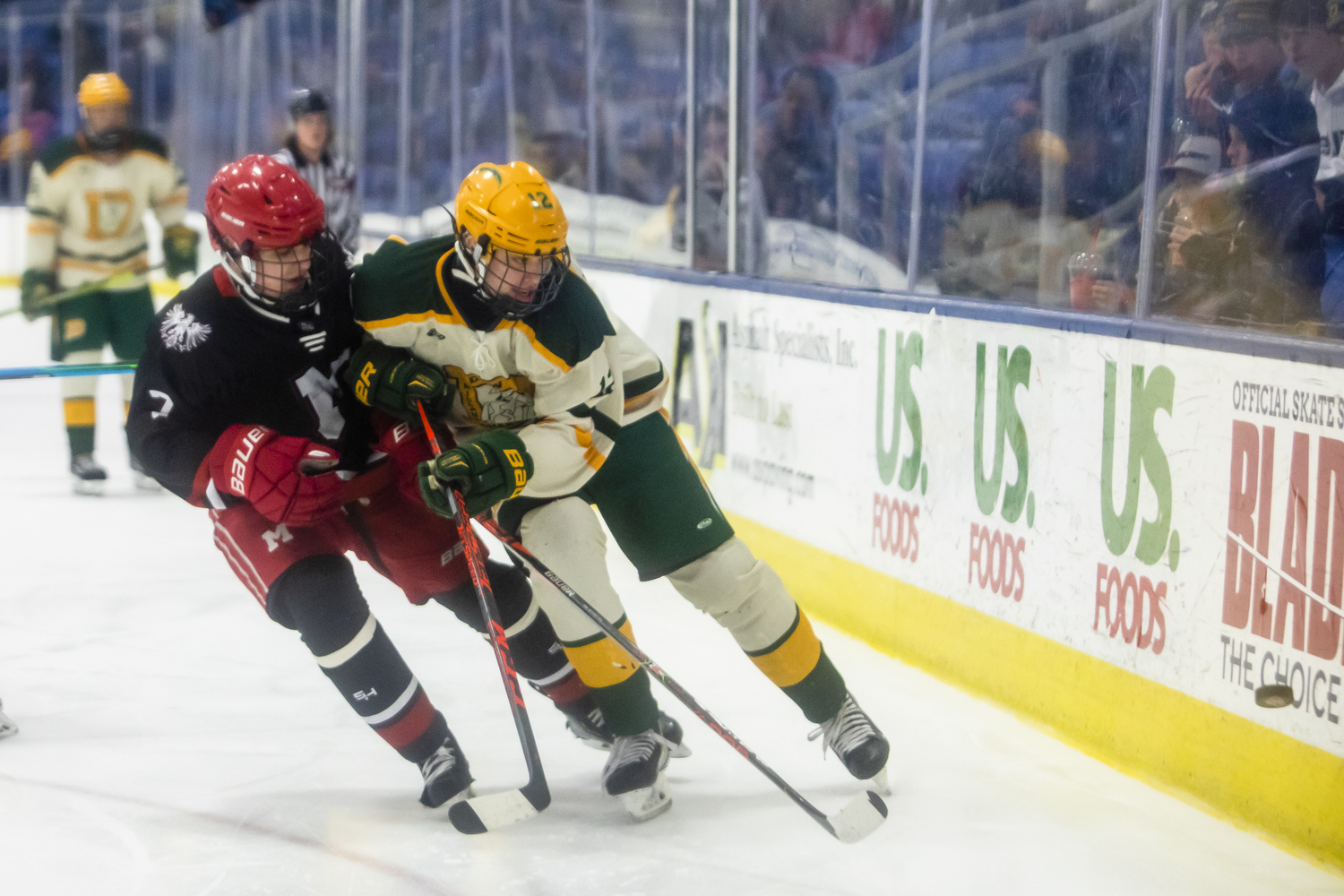 While much of the past year or two has been a nightmare for many, Dow High senior Tucker Pomranky had a very different experience. In fact, for Pomranky, the last 12 months have been like a dream come true – three times as much.

Pomranky has been a key member of three different Dow teams that have recently made exciting and unprecedented history: the Dow-Midland men’s lacrosse team which won a first-ever regional championship last spring, the from Dow who played at Michigan Stadium for the first time last August, and the Chargers hockey team who won a first-ever state championship last month.


Naturally, Pomranky said the past year has been the best of his young life.

“Honestly, I’d say this year made me forget about all that (pandemic-related) stuff,” he noted.

Looking back on the past 12 months, Pomranky said the historic regional title for the men’s lacrosse team was long in coming and not entirely unexpected.

“It was great. We knew last year was a year to watch for Midland Lacrosse. We had all worked together in elementary, middle and high school at that time, and we had built such a bond and such a relationship with each other,” he said, adding of the regional championship, “We knew we had the strength to do it, and it was so cool to have this trophy in our hands.

A few months later, Pomranky and his football teammates found themselves in Ann Arbor, walking on the hallowed turf of Michigan’s “Big House.” It was a moment he and his teammates savored, especially after being robbed of a chance to play at Michigan Stadium in 2020 due to the pandemic.

“I remember when Coach (Matt) Peterson got us together in the summer, and we huddled together, and he said, ‘Boys, we’re going to the big house,'” Pomranky recalled. “We were so excited to have another opportunity. And then to be able to put on a show for everyone and win the game, that was really fun.

Pomranky called the whole experience “amazing” and one he won’t soon forget.

“We came down the night before the game just to get the nerves out, and it was crazy to see how big the stadium really is. Being on this pitch was such a good feeling, and seeing all the people who came to us supporting was really cool,” he said.

“The funny thing is that if we had played at home, the stadium would have been packed. But (Michigan Stadium) is so big that even though we had a ton of fans who came for the game, there still had so many empty seats,” he added with a chuckle.

Asked about his favorite part of the experience, Pomranky admitted, “I’d love to say it was the game itself, but my favorite part was probably going on this trip with the boys. It was a great bonding experience, hanging out at the hotel and having fun.

“And going to the Michigan locker room was so much fun too,” he added, excitement creeping into his voice. “I was able to sit in the same seat (in the locker room) that Tom Brady was sitting in. It was very overwhelming to be in the same locker room with all the great players that played for Michigan.”

Seven months later, Pomranky and his hockey teammates were able to experience a thrill that even surpassed playing at the Big House – winning a somewhat unexpected state championship at USA Hockey Arena in Plymouth. This championship, of course, was a great reward for the Chargers who were denied their chance to play in the 2020 Frozen Four due to the pandemic.

“We knew we had the strength to play at Championship level, and we worked so hard together to make it happen. We had some ups and downs at the start of the season, but we got to know each other as we went. as the season progressed, and to have this award was so cool,” noted Pomranky. state championship).

“…We just played our game and we tried not to lose sight of who we really are,” he added of the Chargers’ 2-0 win over Orchard Lake St. Mary’s in the game for the title. “A lot of people doubted us, and we really used that as motivation. We knew we would be fine as long as we stuck to our plan and obviously we proved we could do it.

According to Pomranky, the experience of playing and winning a state championship was 51 minutes of intense focus, accompanied by equally intense moments of emotion.

“When you first step on the ice, you immediately get that feeling of, ‘Holy shit, we’re really here.’ There are only six teams that can play their last game (in a state final),” he said. “You take a little while to appreciate it, but once the game starts, you are going to do everything for this state championship.

“…As soon as the horn sounded, it was such a sense of relief, knowing that all the hard work has paid off and we’ve proven to everyone and ourselves that we can do it,” he added. “That was probably the coolest part – putting Dow hockey on the map.”

Now, as Pomranky enters his final season as a prep athlete, he hopes he and his lacrosse teammates can write another exciting chapter to cap off their high school careers.

“We all have the same goal in mind. It’s a new year with new people, but it’s still the same goal, and I think we can do it,” he said of the chance to repeat as regional champions. “…We’ve been playing together for so long, and I feel like we have the strength and the connection to achieve this goal.”

Pomranky, who plans to study exercise science and kinesiology at Michigan State University, said his plan for his senior lacrosse season is “just to grind it down for one last season and enjoying everything about it, just really doing it all and hopefully getting another regional championship.

What’s in a Name: Willard Carpenter