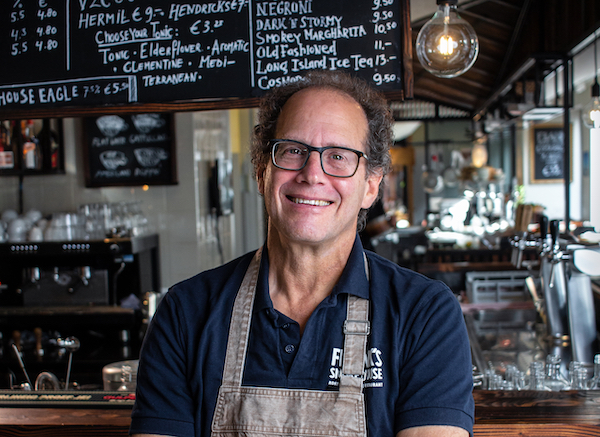 “Dutch is a rich and instructive language. There’s so much historical context’

Frank Heyn grew up in Baltimore and became a cook after ending up in Paris. He then came to the Netherlands to work as a private chef for the US Consulate General before opening his own business. He is now the owner and manager of Frank’s Smoke House, a popular deli in Amsterdam.

How did you end up in the Netherlands?
In 1985, I was living in Paris and working as a cook at the American Embassy in Paris. I also did the occasional moonshine there as a caterer for some diplomats. One of them moved from Paris to Amsterdam to become the Consulate General. He had his office on Museumplein and a beautiful house on Apollolaan. He was also given a budget for a full time cook and asked if I wanted to come over and be his private chef.

I grew to love this place and never left…but, okay, that’s not entirely true. After living here for about three years, I was a bit fed up and had enough. I sold all my possessions and left. I had planned to go to Portugal and, after that, the next country on my road of life. Just before leaving, I met a Dutch girl and fell in love with her, but continued with my plans to travel to Portugal.

How do you describe yourself – an expat, a lover, an immigrant, an international?
I came here in the mindset of an adventurer. I went to Paris without big plans and ended up finding work, going to school and staying there for a few years.

When I arrived in Amsterdam, I thought I would stay for about a year and move on. So I came here as an adventurer and ended up staying here because it felt like home. But, if I had to choose between these four things in the question, I would choose an immigrant because that is who I feel I have become.

How long do you plan to stay?
I have been here for about 37 years so I have no intention of leaving. It wouldn’t surprise me if I left one day. It would probably be to move to the south of France or somewhere else in southern Europe. I also have some favorite places in Spain. The reason I would do this is to be closer to nature. Amsterdam is a good place to be as long as I’m busy with work and other activities and things like that, though.

Do you speak Dutch and how did you learn?
Yes, I speak Dutch. It took me years to get used to it. I was always surrounded by Dutch people, so I often found myself in situations where Dutch was spoken all around me. I did my best to understand. I learned French quite quickly. After six months in Paris, I spoke French well enough to defend myself and survive.

I thought I could do the same when I moved to Holland and would learn the language in six months. This was not the case. It took about five years. I finally got a job at a medium-sized company here and had to write a cookbook. When I was first hired, they wrote in their weekly newsletter, “Our new employee is Frank. Please don’t speak English with him.

I had been here for five years at that time. Over the next six months, as I wrote a book in Dutch and had to speak Dutch, it finally clicked. From there it got easier, but it’s still a continuous learning experience. I definitely got it, but I still don’t know much about Dutch grammar, but I don’t know much about English grammar either. [laughs] But it’s getting better and better every day, actually.

What’s your favorite Dutch thing?
It is the language. I find Dutch to be a rich and instructive language. There is so much historical context, especially in the proverbs and commonly used expressions.

They reflect the people and their mentality so well. You can really express yourself clearly with it. There is a word for everything somehow. But you have to learn how to use it and navigate it.

A phrase that rings a bell is voor spek en bonen [to participate in an activity without caring about the outcome or not having the ability to make a worthwhile contribution]. It really gives you an idea of ​​how Dutch people think and what the values ​​are in their lives.

How Dutch did you become?
It is certainly a difficult question. I became Dutch in the sense that I integrated very well into the local customs and culture. At the same time, I don’t feel Dutch, really. I feel at home in the Dutch environment. In some ways, I act in Dutch. I can go on for hours complaining about certain things and then say how happy I am to be here.

Which three Dutch people (living or dead) would you most like to meet?
Michael de Ruyter. I chose it because I’m so curious about that era. It was such an influential time in the history of the Netherlands and the world. It would be very interesting to see what he has to say about how he was influenced and how he was directed to do what he did in terms of going around the world and conquering it with a certain way.

Arnon Grünberg. He is a contemporary writer. What interests me about him is that he moved to the United States. He lives in New York now, I heard. I have read some of his books. I think he has a good knowledge of Dutch culture. I would be interested to talk to him about his vision of life, to share some things and to exchange some ideas.

Wim Sonneveld. He was a Dutchman innkeeper, actor and comedian. I found him to be a really high level performer. He had a great sense of humor and was very genuine. I would just like to take a few minutes of his time.

What’s your best tourist tip?
I would recommend the Kröller-Müller Museum. It’s great to get out there and get on one of those bikes and cycle around the Veluwe. You can really experience the best side of Dutch nature. In the museum itself, there are many works of art to discover both inside and outside. Inside there are paintings and outside there is a beautiful and extensive sculpture garden. There is a very wide range of classical and contemporary sculptures that are well integrated with the nature that surrounds them.

Tell us something surprising you discovered about the Netherlands
Over the years that I have lived here, I have been surprised at how many innovative and influential things have been developed here in Holland. They affected the whole world. It’s a small country, but it has a pretty big footprint in many ways if you think about it. You can think of the stock market and how more and more cities are taking the bike lane these days.

You can think how the Dutch are also very planners. Their cities are planned and the country is carefully laid out. Many other countries come here to see how they have done things. I would never have discovered this or realized this if I had not lived here long enough to see how often the Netherlands plays an important role in many things that have been assumed by the whole world throughout history and at the present time.

If you only had 24 hours left in the Netherlands, what would you do?
I guess I would cycle around Amsterdam and go to as many different neighborhoods as possible. I would soak up their atmospheres and would definitely stop at a few cafes. I would just sit with the people there and chat with them before moving on to the next one.

I really like the Jordaan, and there’s a cafe I like called Cafe ‘t Papeneiland. If you go there borrel afternoon hour, there are definitely a lot of locals hanging around and talking to each other. There is a certain familiarity with the neighborhood among the people there, but there are more and more tourists because people like me are talking about it.

But it is okay. It’s a nice place and the tourists who come have more power for them. They come in and get the same treatment as everyone else. It is located in a nice corner of the Brouwersgracht. The cafe has big tall windows and you can just sit and enjoy the scenery. At one point, Bill Clinton also visited the place. He had their calltaart. I’ve never tried it, but I guess it’s pretty good.

You can find out more about Frank’s Smoke House via his website.

Frank was talking with Brandon Hartley.

Thank you for your donation to DutchNews.nl

The DutchNews.nl team would like to thank all the generous readers who have donated over the past few weeks. Your financial support has helped us extend our coverage of the coronavirus crisis into evenings and weekends and ensure you are kept up to date with the latest developments.

DutchNews.nl has been free for 14 years, but without the financial support of our readers, we would not be able to provide you with fair and accurate information on all things Dutch. Your contributions make this possible.

If you haven’t donated yet, but would like to, you can do it via Ideal, credit card or Paypal.

In California, Elena Gross is incoming co-director of the Berkeley Art Center, which champions Bay Area artists and curators