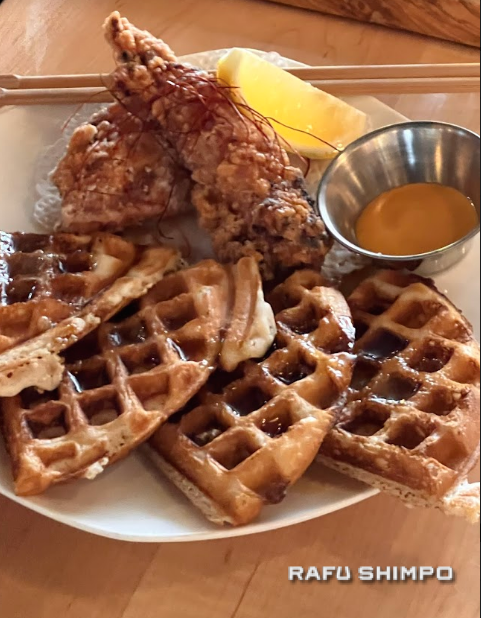 Feast your eyes and taste buds at Delicious Little Tokyo

The popular Delicious Little Tokyo, held from June 25 to 26, attracted many people to Japantown to enjoy Japanese cuisine and food culture.

According to Kristin Fukushima and Kisa Ito of Little Tokyo Community Council, who hosted the event, they introduced new activities this year, such as “Go Little Tokyo Pop-up Shop” and “J Town Bingo”. The shop sold quirky Little Tokyo and Japanese food themed pins, stickers and t-shirts. Participants in the free bingo games won prizes by answering questions and completing interesting tasks, such as “Take a photo with a Go Little Tokyo volunteer.”

Other activities included “Kakigori” (shaved ice) in the Japanese Garden at the Japanese American Cultural and Community Center, the Hawaiian noodle dish saimin, and workshops such as “Spam Musubi”, “Kokedama (Moss Ball Bonsai)” and ” Furoshiki (Cloth Wrapping Technique), as well as a donut decorating station and a calligraphy demonstration, allowing people to enjoy Little Tokyo from different angles.

Of course, the self-guided walking tour of food-themed restaurants and shops was the most popular attraction. Last year, two courses were offered, but this year the number has been increased to three.

The sweet and savory treats offered by “J-Town Treat & Eats” were bottled iced tea from MILK+T, sausage donuts from Cafe Dolce, character pastries from Okayama Kobo Bakery, pork gyoza from Rakkan Ramen and yuzu salmon miso onigiri from Rice & Nori. With these foods in hand (or in their stomachs), tour participants made stops at two of Japantown’s oldest retail stores, Bunkado and Rafu Bussan, and eventually ended up at the JACCC’s Japanese Garden.

Coleen Uchida-Tamiya and Mark Tamny came from San Diego with the sole purpose of enjoying the event. They said of J-Town Treat & Eats on Saturday, “Everything was delicious, but the onigiri was surprisingly good!”

On Sunday, they were spinning the wheel bound for J-Town Bingo, the soft-opening of the Yoboseyo Superette store on Second Street. With in-game merchandise in their bag, the two headed out for the Little Tokyo Story Tour.

“It’s a great way to enjoy a weekend with friends.” At the Sake Dojo, four friends, Mario Martin, Beth Kopacz, Iris Blake and Libo Matshazi, praised the event. They added, “I wanted to know more about Little Tokyo” and “I wanted to support the community more.” Then the food arrived to enlarge their smiles.

The Sake Dojo special event food was karaage chicken and wasabi maple syrup waffles, which is a Japanese version of a favorite American dish. “There is also an Agedashi tofu option for vegetarians,” said Cat, the restaurant manager.

The food was accompanied by a flight of beer from Sapporo-Orion-Suntory or a cocktail called Maple Spice Old-Fashioned.

Going forward, they were to enjoy two more drinks at two other places with food: mabo tofu tacos at Far Bar and mushroom toast at Wolf & Crane. These creative dishes have transcended the boundaries of typical Japanese cuisine.

Little Tokyo’s delicious self-guided food tours were very popular and sold out, as was the Food History Tour presented in partnership with the Japanese American National Museum and the Little Tokyo Historical Society. Kisa Ito said the organizer sold around 500 tickets in advance. Around 2,500 people attended, including weekend drop-in events.

In Little Tokyo, many new stores have now opened in locations that were vacant during the pandemic. The area was bustling and crowded, and Little Tokyo’s popularity is expected to continue to rise in the future.

The Japanese food culture showcased by Delicious Little Tokyo was not limited to traditional Japanese cuisine, but was more inclusive with Japanese American Hawaiian cuisine such as Spam musubi and saimin, and legacy establishments tied to Little’s history. Tokyo. The event made it clear that Japanese and Japanese American food culture is firmly rooted in the United States.

10 ways the village is celebrating its 150th anniversary