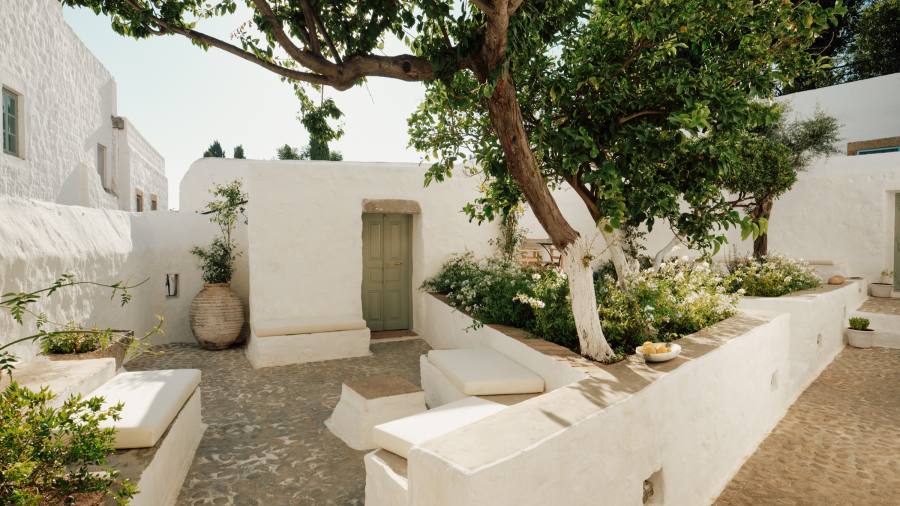 Lock yourself away in Patmos

Londoners know Maria Lemos as the woman behind the Rainbowwave fashion showroom and also Mouki Mou, where understated womenswear, jewelery and accessories come together in one of Marylebone’s chicest showcases. What they may not know: She and her husband, Gregoris Kambouroglou, are longtime residents of Patmos. For 10 years they have been renting the oldest monastery on the island – a 16th-century beauty in the chora, in which, after meticulous restoration work, they have carved three guest suites.

Pagostas is steeped in Greek and Patmosian design, cuisine, colors and traditions: most of the furniture, linens and tableware were made on Patmos or sourced from merchants and markets in Athens. A vegetable garden lined with jasmine and myrtle scents the air (and is captured by the home fragrance they created with perfumer H’s Lyn Harris). The plan is to remain open for much of the year, offering the chance to experience the chora and Patmos – less the buzz of July and August, but with all its innate flair and genuine hospitality present. From 200€, pagostas.com

The UK ‘farm stay’ model takes many forms, from the plush environments by Ilse Crawford and the handcrafted ‘cyders’ of The Newt in Somerset to the more invigorating proposition of tent nights and hands-on lambing at The Farm Camp in Wiltshire. . At Retreat East, a dairy farm outside Coddenham in Suffolk, owner Dominic Richards has given new life to the 16th century farmhouse, a set of some 16 barns and outbuildings and original gardens. The farmhouse has four en-suite bedrooms; barns and cottages – done up in a pleasant (if slightly generic) modern English Oka-meets-Soho-House style – sleep between two and four people and can be self-contained; and there’s a small spa and restaurant with mouth-watering dishes and creative cocktails. Richards’ green credits also look promising, with groundwater reuse, solar heating and electricity, and an on-site waste treatment plant. From £130, retirementeast.co.uk

Years have passed, but the word in advance is that this new Aman lives up to expectations and more: last week, the hotel made its New York debut, welcoming its first guests to 83 suites in the historic 1921 Crown building at the corner of 57th and Fifth Avenue. This is Aman’s second urban property (the Tokyo hotel opened in 2017): designer Jean-Michel Gathy has made it his delicate mission to bring in just enough Asian vibe to evoke the brand heritage while highlighting the grand bones of a classic Manhattan building.

Minimalism may have been the design mission, but when it comes to spaces, it’s all New York scale: some of the city’s largest midsize rooms, an outdoor dining and lounging space of 650 m² (with a retractable roof for year-round use) and a stunning 2,300 m² Aman Spa over three floors, whose ambitions to change the wellness landscape here, where size matters, seem quite made achievable. From $3,500, aman.com

Since 2011, Eric Dardé has been confidently leading Beaumier, the French micro-brand hotel whose singular style imprimatur extends from the mountains (Le Val Thorens, Les 3 Vallées) to the sea (the very fabulous Roches Rouges de la Côte d’Azur) – and between them, a handful of pretty enclaves around Lourmarin. His most recent is a 21st-century reimagining of La Bastide de Capelongue – an old-school mainstay just outside Bonnieux, whose lovingly tended Michelin-starred restaurant (now called La Bastide). The Beaumier version is a clean, polished yet warm reinterpretation of Provence, layering handmade furniture in 37 rooms and suites finished in golden travertine and creamy plaster. It’s essentially a small world unto itself: besides the two pools, a more casual bistro-style restaurant and morning cafe, and the spa, there are expansive gardens, a library, a bookstore, and several other shops — with Bonnieux in easy striking distance, and the majestic Mont Ventoux on the horizon. From around €272, beaumier.com

A glare in the Botswana delta

And finally to Botswana, where a conservation legend has teamed up with an African-style legend to open a new camp in the northern part of the Okavango Delta. Ralph Bousfield (of Jack’s Camp in the Kalahari Desert) has teamed up with Colin Bell (co-founder of Wilderness and Great Plains Conservation, two of Southern Africa’s most established safari providers), consolidating his operations under the umbrella of Bell’s Natural Portfolio of selection of lodges, camps and mobile outfits.

Duke’s Camp is the first fruit of this partnership: set in a concession rich in megafauna, it draws loosely from the vein of the countryside that has made Jack’s fodder for ambitious travellers: block-print cottons and cashmeres, Roorkee chairs on teak decks, four-poster beds, copious candles. Natural Selection brings the credibility of sustainability, but each of the guides was trained by Bousfield himself. Starting at $695 per person, naturalselection.travel