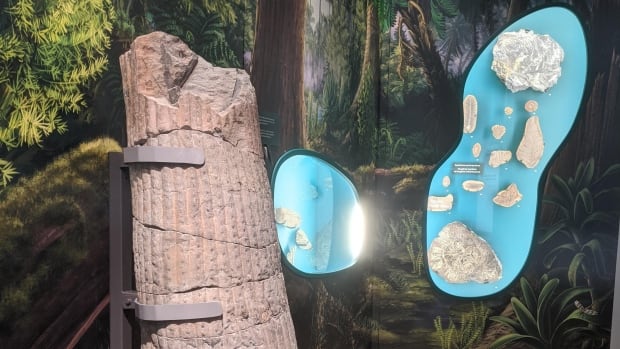 A piece of the history of life on earth, an ancient tree that began its modern journey after falling from a cliff in Nova Scotia, is now on display in a new gallery at one of the busiest museums in the country.

After decades of preparation, the Dawn of Life opened this month at the Royal Ontario Museum in Toronto, bringing together a unique collection of fossils from UNESCO World Heritage sites across the country. .

One of these fossils is an irregular column found in the Fossil Cliffs of Joggins, Nova Scotia. It’s a fossilized tree that dates back to the Carboniferous Era, when the cliffs that now border the Bay of Fundy were an equatorial swamp in the heart of the Pangea supercontinent.

The 310-million-year-old tree is now part of a permanent exhibition that traces life from its earliest origins, four billion years ago, to the appearance of the first dinosaurs and mammals it about 200 million years ago.

â€œAll over Canada you will find sites that talk a lot about fossils,â€ said Jordan LeBlanc, director of operations at the Joggins Fossil Institute. “I like that we are represented there too – Joggins is represented with the best.”

The Dawn of Life Gallery draws on the unusually high proportion of UNESCO World Heritage sites in Canada – Canada is the only country in the world to have four – to trace life from its earliest known evidence .

â€œThis is something that is very often overlooked in museums around the world,â€ said Jean-Bernard Caron, Richard M. Ivey curator of invertebrate paleontology at ROM.

It all starts with a unicellular organism about four billion years ago, which scientists call LUCA and which was found in Quebec.

â€œAs you look at this piece, you are reflecting on the old life and how we are all related to one ancestor,â€ Caron said.

From there, the gallery travels through fossils of Canadian UNESCO sites, of the earliest organisms found at Mistaken Point, Newfoundland, where traces of some of the earliest examples of multicellular life forms can be found, to the Burgess Shale in the foothills of the Rockies in British Columbia, which tells the story of the origin of animals in the Cambrian Explosion.

â€œBasically, the roots of our modern world go back to the Burgess Shale,â€ Caron said.

Fossils from a third UNESCO site – Parc national de Miguasha in eastern Quebec – show significant developments since the “Age of Fish”, including fossils of fish believed to give birth to terrestrial animals on all fours about 370 million years ago.

Finally, the gallery leads to the Carboniferous Period, where the Joggins stump serves as the centerpiece of the section, Caron said.

Trees from this period, unlike those today, had rigid exteriors and fibrous centers. When these centers rotted, it left a hollow tube that sand or mud would once have poured into, ultimately forming the kind of column that is now in the ROM.

This type of “cast-and-cast” fossil is common in Joggins, although few are this large, and dates back to a time when tropical rainforests first appeared on the planet, providing oxygen. to the atmosphere, which has allowed large organisms to thrive.

But this period is not only important for the history of life, it is also a crucial part of our understanding of that history, said John Calder, a geologist and paleontologist who has worked much of his career on them. Joggins Fossil Cliffs.

â€œIt is in these tropical rainforests that the evolution from amphibians to reptiles has happened and is being recorded,â€ Calder said. “And Joggins happens to have the oldest example, in the fossil record of reptiles, of this seminal stage in the evolution or branching of the tree of life.”

About 300 million years ago a number of these first reptiles either fell into the hollow trunks of trees at Joggins, or – Calder’s favorite theory – used them as dens, when they were buried under the mud and sand.

In the mid-1800s, Charles Lyell, a Scottish geologist and pioneer of modern geology, was walking on Joggins Beach and found a fossilized stump containing the bones of one of these reptiles.

The discovery was a sensation – so much so that Charles Darwin would continue to refer to Joggins in About the origin of species – and played a role in understanding evolution.

Calder said it was gratifying to see Joggins shape that understanding once again by appearing in the ROM’s Dawn of Life gallery, in part because of Joggins’ relationship with the people of Nova Scotia – and one person. in particular, the late Don Reed. Several decades ago, he found the tree now at the ROM, and Calder gave it the title of “Guardian of the Cliffs.”

â€œHere is a former coal miner who made his love for where he lived, before others really stepped in to do anything, to do the proper recognition of Joggins. There he was, him and his family. , and others to Joggins before him, â€Calder said.

Calder said Reed would have been “thrilled” to see the tree and the care it has received, now reaching an even wider audience with the opening of the Dawn of Life gallery.

“He wanted to share the story of Joggins’ Wonders, so it would be tickled pink to have this tree he had collected on display at the ROM, and to me that is really what is special.”

The gallery opens after a summer and fall of extreme weather events linked to climate change, and amid the continued instability caused by the pandemic. Caron, the curator of the ROM, said it was a way for people to understand what had happened in the past and a reminder of the fragility of life.

â€œIt has sometimes taken billions of years to create the organisms we see today,â€ Caron said. “And it’s actually very fragile in the sense that you can destroy these life forms, which carry all of this history within themselves in the blink of an eye.”

â€œSo the fossil record in this gallery hopefully gives the visitor a way to reflect on the great challenges we face today. And, hopefully, to understand and appreciate what life is, and hopefully protect it as well. “

French coast: the first explorers who made the British fear a French-speaking Australia | Exploration