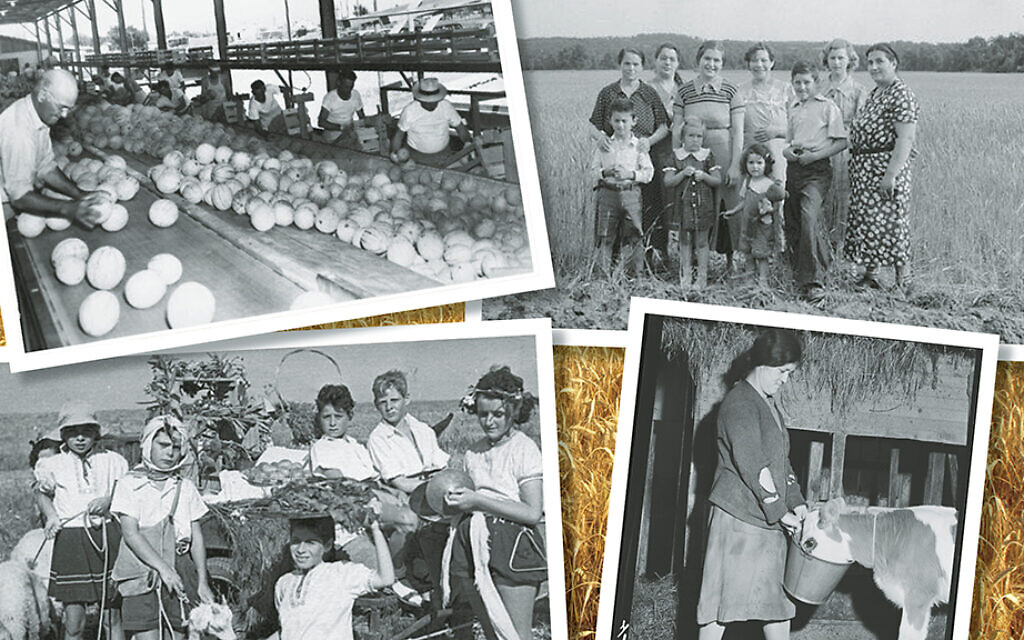 Somehow, miraculously, Wolf Ehrlich survived Auschwitz. In 1951, he immigrated to the United States with his new wife, Hannah, another Polish survivor. When they arrived here, a Jewish philanthropic organization set them up as poultry farmers in Egg Harbor. They worked hard and eventually became owners of a chicken and egg business.

The Jewish farmers of the Garden State were already well established by the time the Ehrlichs arrived; in fact, these survivors were late additions to the Egg Harbor colony.

The phenomenon began in the 1880s, when thousands of Jewish farm settlers left pogrom-infested Russia to create farming communities on four continents.

A farmer checks his melons.

Most of us are familiar with the farming businesses these immigrants set up in what was then Palestine, painstakingly paving the way for a successful Jewish settlement in areas such as Petach Tikva, Rishon LeZion, and Zichron Yaacov.

Now we can learn more about those who chose to cultivate the soil in the United States, Canada, Brazil, Argentina and even Germany, among others.

An online exhibition on modern Jewish agriculture will launch on October 21 with a Zoom presentation by the exhibition’s creator, Jonathan Dekel-Chen, professor of Soviet and East European Judaism at the Hebrew University in Jerusalem. He is a visiting scholar this year at the Allen and Joan Bildner Center for the Study of Jewish Life at Rutgers University.

A Jewish farmer finishes milking his cows. (Library of Congress)

New Jersey was the poultry capital of the eastern United States, said Dr Dekel-Chen. Although hundreds of Jewish farms also flourished in the New York Catskills, parts of Connecticut and as far west as California, there were large concentrations of farms in the counties of southern New Jersey – Atlantic, Cumberland, Salem and Cape May – and even further north in Morris County (see sidebar).

While some Jews arrived from Europe with agricultural experience, he added, the vast majority had to learn on the job, but they received help.

The flyer from an agricultural school in Doylestown, Pa., The third and last such Jewish school in the country. The second school was in Peekskill.

â€œWolf and Hannah got an existing home with an affordable mortgage. There were self-help societies in these settlements that allowed them to buy whatever they needed and helped them market their products. The Jewish Agricultural Society had a training network throughout North America.

The products of Jewish farms were not limited to chickens, he continued. â€œOver time, what they grew changed and was different from place to place. Dairy products, field crops, tomatoes, root vegetables, orchards and vineyards have all been tried. Even tobacco in some places. However, poultry is a thread that runs through them all. It has provided income all year round. It’s low risk and low capital, and you don’t need a lot of training to be successful.

Dr Dekel-Chen speaks from experience. He grew up in Connecticut but has lived in a kibbutz bordering Gaza for 40 years, since he was 18.

A group stands in a field.

â€œI was a farmer for many years on the kibbutz,â€ he said. â€œMy first big career was in agricultural machinery and irrigation. I arrived late at the academy. I started my bachelor’s degree at the age of 31.

His doctoral thesis was based on a large amount of information he had discovered in Russian, Yiddish, English, French, German and Spanish about Jewish agricultural settlements, much of it untranslated.

“I was fascinated to see what was going on there and how interconnected it was in terms of technology, the philanthropy that supported it and how people were moving in many countries to pursue agriculture,” said he declared.

Dr Jonathan Dekel-Chen will be at Rutgers this year as a visiting scholar at the Allen and Joan Bildner Center for the Study of Jewish Life.

As a visiting scholar at the Bildner Center, he had planned a public mini-course on the history of Jewish agriculture, focusing on New Jersey from the late 1800s to the early 1960s. He couldn’t wait to take Students take a field trip to see the buildings and cemeteries that remain in the Jewish farm clusters of southern Jersey.

Covid of course changed those plans. Dr Dekel-Chen brainstormed with Dr Nancy Sinkoff, academic director of the Bildner Center, and came up with the idea for a permanent online exhibition.

â€œAt the launch, we will announce a crowdsourcing project to help us collect digital materials and digital artifacts relevant to Jewish agriculture everywhere,â€ he said. â€œSome of this information will be added to the online exhibit. “

Israel is not the focal point of the exhibition as its agriculture is already “legendary and iconic,” said Dr Dekel-Chen.

â€œHowever, what has become the agricultural miracle in Israel can only be understood in the context of the worldwide phenomenon of Jewish agriculture, which begins in the 1880s. Just as a handful of young idealistic Zionists came to create new settlements. agriculturalists in Ottoman Palestine, their Jewish neighbors, cousins â€‹â€‹and classmates – for almost identical reasons – went to create utopian Jewish townships in the United States and elsewhere. In many ways, it eclipsed Jewish farm life in Palestine, but it didn’t last that long. “

Dr. Dekel-Chen shot some videos for the exhibit at Woodbine, one of New Jersey’s first and most successful Jewish agricultural towns.

A Jewish woman feeds a calf with big eyes. (Courtesy of Jack Delano, Library of Congress)

â€œThe Baron of Hirsch Farm School, the country’s first vocational agricultural high school, was founded in Woodbine, and it was specifically aimed at the Jewish sons and daughters of the Jewish colony,â€ he said. Another followed in Doylestown, PA, and the third and last such school in the country was in Peekskill, NY.

The first principal of the Woodbine School was Hirsch Loeb Sabsovich, a Russian lawyer and one of the leaders of the Jewish agricultural movement Am Olam. His first attempt at farming in North America had failed and he returned to Russia to study chemistry.

When he returned to the United States in the late 1880s in a wave of hundreds of thousands of other European Jews, Sabsovich worked for the government at an experimental station in Fort Collins, Colorado.

This Woodbine cemetery was intended for the local rural Jewish community.

“The Baron Maurice de Hirsch Fund, the predecessor of the Jewish Agricultural Society, located Sabsovich there and asked him to oversee the founding of Woodbine as a model settlement with 12 immigrant Jewish families from Eastern Europe.” , said Dr Dekel-Chen.

â€œSabsovich was known as a practical idealist. He was one of the few Jews in 1891 who knew modern agriculture and spoke English fluently during this time. It truly embodies the kind of transnational nature of Jewish agriculture.

In 1903, Woodbine became an independent borough of Dennis Township and Mr. Sabsovich was elected its first mayor. In 1900, Woodbine had 900 inhabitants, including 760 Jews. Twenty years later, 825 of the 1,400 inhabitants were Jewish. They remained in the majority until the 1930s.

This bag of potatoes comes from a Jewish farm in Ellington, Connecticut.

â€œUntil about 1948, between 100,000 and 150,000 Jews were actively engaged in agriculture in hundreds of communities. It quickly declined due to a variety of factors, including the corporatization of agriculture in the United States, which began to suffocate family farms. “

Another factor was the GI Bill, which enabled WWII veterans – including returning veterans who had grown up in the colonies – to get a college education. Even those who chose to study agronomy rarely returned to the farm. One became the state agronomist of Connecticut, said Dr Dekel-Chen.

â€œThere were a few residual Jewish tomato farmers in the 1970s, but most left in the late 1950s and early 1960s. Some of the farms became an early version of Airbnbs and summer cabins, especially in upstate New York and Connecticut. They rented rooms on their farms to Jewish vacationers in the city.

In Alliance, a Jewish farming colony in Salem County, a great-great-grandson of one of the founders recently created the Alliance Colony Reboot. â€œThey still have the farmland and it is still cultivated,â€ Dekel-Chen said. “It’s relatively rare.”

â€œBut other descendants still live quite close. The Vineland area is home to many because their parents chose to move in the 1950s and moved to the nearest town. Occasionally they have had meetings.

The online exhibit includes video clips, some shot on location decades ago, featuring the farmers themselves, and others shot by Dr Dekel-Chen at Woodbine and Alliance.

There are also historical photos and descriptions, interviews and music inspired by rural Jewish life. Oral histories are planned as a future addition.

Dr Sinkoff said the exhibit “reminds our local and national audiences of the rich history of Jewish agricultural settlement in New Jersey, the Garden State, illustrating that Jewish immigrants from Eastern Europe made their way. in the United States not only as industrial workers in urban areas “. centers, but also as chicken and dairy farmers in rural areas.

â€œThese immigrants have planted deep roots in New Jersey and our exhibit honors their efforts; at the same time, this rich past is linked to the current interest of young Jews in re-engaging in agriculture as part of their commitment to the environment and sustainability in the 21st century.

Who: The creator of the Jonathan Dekel-Chen exhibition, Rabbi Edward Sandrow’s chair in Soviet and Eastern European Jewry at the Hebrew University of Jerusalem and the visiting scholar of the Bildner Center until June 2022

What: Will present virtual public lecture to launch online exhibit, “Jewish Agriculture in the Garden State,” at the Allen and Joan Bildner Center for the Study of Jewish Life at Rutgers University

For information and registration: Prior registration is required; go to BildnerCenter.Rutgers.edu; call (848) 932-2033; or by e-mail to [email protected]

Bryan Stevenson, Founder of the Legacy Museum, on American Slavery and Modern Incarceration

10 ways the village is celebrating its 150th anniversary