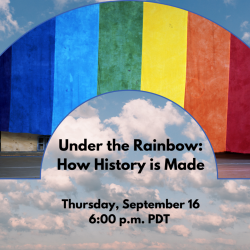 GLBT History Museum: Round Table | Under the rainbow: how history is made

From books and films to museum exhibits and art installations, we continually interact with objects from history. Many people are unaware of the behind-the-scenes work that takes place to authenticate, contextualize, and present a single exhibit, work that can take months or even years. At this event, a panel of experts will focus on the original 1978 rainbow flag, a fragment of which was recently discovered and is now on display at the GLBT Historical Society Museum. Panelists will delve into the origins of the segment and its long journey home, offering a look behind the curtain and under the rainbow in a program that examines how history is made, from discovery to display. The event will include a brief question and answer period; guests are encouraged to submit questions in advance. Send your questions to [email protected] with â€œUnder the Rainbow eventâ€ in the subject line.

James (Jim) J. Ferrigan III (he / him / her) first became interested in the flags as a pup growing up in Bethlehem, Pa., After his father, a purchasing agent for the Bethlehem Steel Corporation , brought home flags salvaged from a WWII ship being demolished. In the 1970s, he became a salesperson with Paramount Flag Company in San Francisco and was the retail manager of its Polk Street outlet, the Flag Store. He worked closely with the storefront, Gilbert Baker, and together they enacted and promoted the Rainbow Flag for a decade and worked on many other displays. In the 1990s, Jim opened another flag store in Sonoma and played a central role in the parade and celebrations for the 150th anniversary of the California State Flag (the Bear Flag) in 1996. He is now consultant vexillologist for museums, collectors, auctions. homes and governments and maintains the largest private collection of flags in the United States. He is the former vice-president of the North American Vexillological Association and is currently its treasurer.

Eric Gonzaba (he / him / her) is Assistant Professor of American Studies at California State University, Fullerton, where he teaches courses on the history of race and sexuality in America. He got his doctorate. in American History at George Mason University in 2019. His work has previously been supported by grants and scholarships from the National Endowment for the Humanities, the Point Foundation, and the Elton John AIDS Foundation. Professor Gonzaba is currently co-chair of the Committee on LGBT History.

Melissa Leventon (she / she), founding partner of the Curatrix Group Museum Consultants and Appraisers, specializes in European and American costumes and textiles. Formerly curator in charge of textiles at the Fine Arts Museums in San Francisco, Melissa has also curated exhibitions involving media ranging from contemporary glass to the Dead Sea Scrolls. Local exhibits include Somethin’s Happening Here: Bay Area Rock ‘n’ Roll 1963-1973 at the Museum of Performance & Design and Artwear: Fashion and Anti-fashion at the California Palace of the Legion of Honor. She has contributed to numerous exhibition catalogs and journals and has also written four books. The most recent, the catalog of the exhibition Fit for a Queen: Her Majesty Queen Sirikit’s Creations by Balmain, was published in August 2016.

Andrew Shaffer (moderator, he / her) leads the GLBT Historical Society’s outreach, media and fundraising programs. Prior to joining the company, he led development efforts with several local nonprofits, including the Immigrant Legal Resource Center and the California Preservation Foundation. He is also trained as a historian, and his college education includes graduate studies at the University of San Francisco and the University of Wisconsin, Madison, where he helped create that city’s first permanent LGBTQ archives.

This event will take place online. After registering, you will receive a confirmation email with a link and instructions for registering.

Become a member of the GLBT Historical Society for free admission to the museum and program, discounts in the museum shop and other benefits: http://www.glbthistory.org/memberships

The AT Stewart Consignment Shop