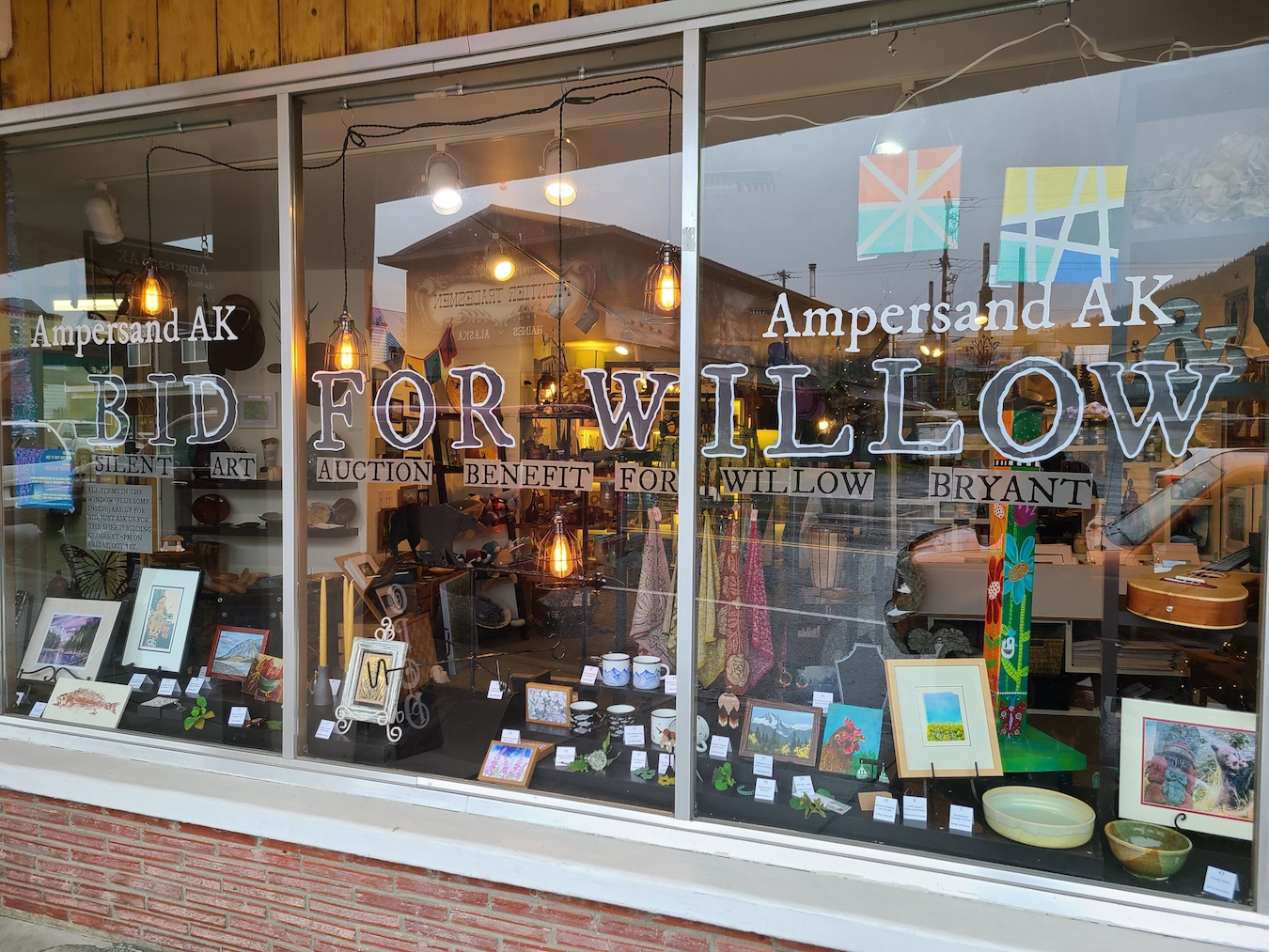 The first Friday is back in Haines, after some took a month-long hiatus due to the COVID outbreak in the community. Events on October 1 will include historical exhibits, brand new artwork and a community auction fundraiser for a local family. Corinne Smith of KHNS gets this preview.

This first Friday, a wide variety of original artwork is on display in Haines, and this month there’s a mission too. More than 50 local artists, and a few from Southeast Alaska, donated pieces to a silent auction to benefit Willow Bryant, a youth from Haines currently in treatment for anorexia. All the profits will go towards his medical expenses.

The auction is hosted by co-owners Amelia Nash and Andrea Nelson of Ampersand AK, an art gallery and gift shop on Main Street.

â€œInitially, we only contacted a few people on social media and by phone,â€ Nash said. â€œAnd then, as the news spread, we received a lot of unsolicited donations, which continue to flow until yesterday. So we have some new items that people may not have even seen that will be on the floor tonight. So that’s just a huge outpouring of generosity from artists and business owners, and it’s wonderful. “

Co-owner Andrea Nelson points out a few pieces, which are displayed in the front window, where “Bid for Willow” is stenciled through the glass.

â€œWe have a very popular chicken painting, it’s a hot item,â€ Nelson said with a laugh. “I mean there is everything from knit hats and enamel mugs to garden art and weathervanes.”

A full auction the list of articles is available online now on Ampersand AK’s social media pages, and auctions are open until 7 p.m. Friday night. A GoFundMe set up by the family has already raised over $ 33,000 to reach their goal of $ 85,000 on Friday afternoon. Nelson says the level of response has been inspiring.

â€œI feel like because of the change of seasons and winter, which is approaching a difficult birthday for many people, and just a few difficult years with COVID, we are all lacking in motivation and energy. “Nelson said. “And making a call to action and seeing the response is really inspiring and fueling the engineâ€¦ and really the idea that artists and the community can come together to help someone who needs help.”

Next to the bookstore, above the piano of owner Amy Kane, Willow Bryant’s grandmother, Debi Knight Kennedy displays a collection of sculpted and stylized driftwood figurines, also intended for fundraising.

Talia’s Treasures on Main Street is also donating 10% of its daily sales to the fund until October.

Down Main Street, Larry Johansen is one of many Haines artists exhibiting at the Alaska Arts Confluence, a nonprofit art gallery. He just moved to Haines from Juneau. Originally from Ketchikan, he says he’s been photographing Alaska since he was 17. He says he has over 100,000 photos and shows some of the best. He points to the one looking across the water at Yakutat Glacier.

â€œIt is one of the most beautiful places I have been to,â€ Johansen said. â€œIt was such a moment when we arrived, it was like a holy moment. We all sat down, looked at it, didn’t say a word to each other, we were all humbled by the beauty we saw.

Larry Johansen poses with his photograph on display and two of his books, including “The Golden Days of Baseball” (Corinne Smith / KHNS)

The Haines Sheldon Museum will present selected objects from its own collection, entitled “Treasures from the Vault II: Nature’s Mixed Media”.

â€œWe wanted to do a sequel to the last ‘Vault Treasures.’ And that was focused on community art acquisitions, â€said Zachary James, museum collections coordinator. On the theme of organics, the new exhibit features artifacts from the early 1900s, including Chilkat baskets, beaded slippers, and a carved walrus tusk. James says there are a few items that will be displayed for the first time.

â€œThere is a cedar cord that was part of someone’s badge. And so it was done in Klukwan, the record says, and you see it worn around someone’s neck and then on someone’s shoulder. And the cedar rope is woven in a way, it is joined to itself. And this connection that this loop must always somehow be maintained. I thought that was a pretty good metaphor, you will always see people tucking in the strands from the ends because it resists being placed in a loop with itself.

Haines High School students have postponed their skate park mural project due to the weather, but there will be a community event from 4 p.m. to 6 p.m. on Tuesday, October 5 with food, skating and ice skating. the music.