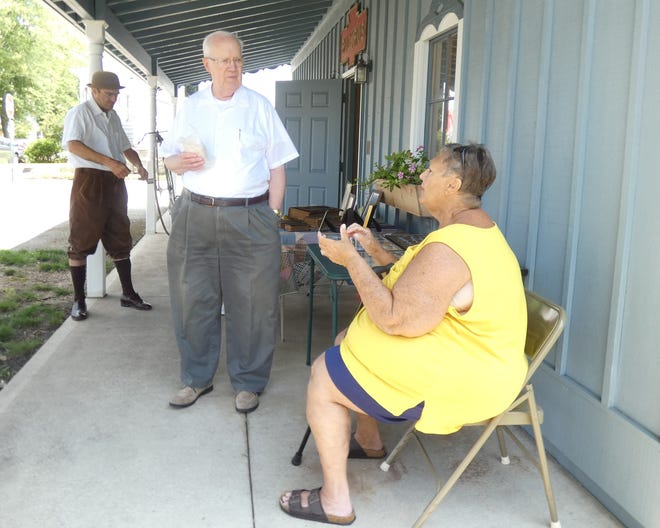 It was good to be back, John Kurtz said.

For the first time since before the COVID-19 pandemic, the Historical Society of Bucyre had its Historic Day event at Scroggs House Museum202 S. Walnut St., Saturdays.

“The weather has been great,” Kurtz said. “We had, I would say, a nice crowd.”

It wasn’t a big crowd, but it meant people could see things and take their time, especially at home, he said.

“It was a good day,” he said. “It’s good to find the thing after a few years of absence.”

The 2020 event has been canceled due to the pandemic. Last year, the museum held an open day during Celebration of the weekend of the bicentenary of the 4th of July of Bucyre.

“We decided last year not to have Historic Day for this reason – we opened it during the bicentenary this weekend and we didn’t want to put too much strain on our staff to get two things straight,” said Kurtz. “They were too close to each other, relatively speaking.”

Linda Blicke, another member of the historical society, agreed that the crowd was not as large as usual, although a large number of people were present just as the event began. Skipping two years may have been a factor, and not as much happened as in past events.

“But like I said, we haven’t had it for two years. We’ll pick up the pace next year,” Blicke said with a laugh.

Attendees had the chance to view exhibits featuring newly acquired objects relating to Bucyrus Medal of Honor recipient Harry Martin and at the Gathering family, who operated the copper kettle for many years.

Verna Schifer, a seventh-generation descendant of Bucyrus founders Samuel and Mary Norton, shared some of his family’s memories outside the shed. His distant cousin, Dennis Norton, and his wife, Sue, greeted visitors outside the museum’s front door, dressed in period costumes.

“It’s fun talking to him; we have a lot of great times putting the stories together,” Schifer said. “I gave him a hard time because every street in Bucyrus is named after boys except Mary.”

The Nortons had 12 children., and several downtown streets are named after their sons. Schifer is descended from their oldest daughter, Louisa.

This is the third time she has exhibited some of her items at one of the events, she said.

The goal of History Day is to give everyone the chance to tour the facilities and learn more about the city’s history, Kurtz said ahead of the event.

The museum is normally only open one afternoon per week, from 1-4pm on Mondays. It is closed on public holidays.

“That’s not always convenient for some people, especially those who work,” Kurtz said. “But it was the best we could do, one afternoon a week to keep the museum open regularly. It’s just a special weekend once a year that we do.”