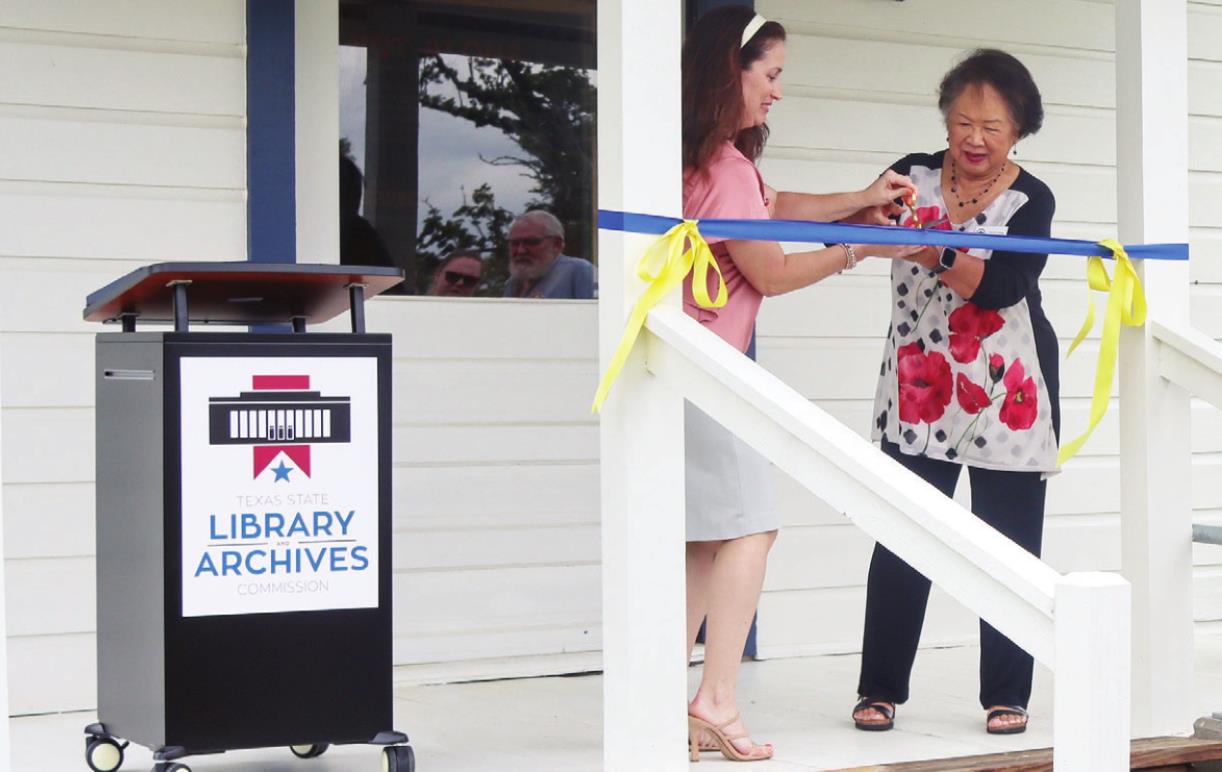 Dignitaries and staff from the Texas State Archives and Library Commission in Austin and Rotary International clubs in southeast Texas gathered Saturday, April 30, on the grounds of the Sam Houston Regional Library and Research Center, affectionately known as locally the “Sam Center”. The reason for this was the inauguration and opening of the historic Rotary Club Hull-Daisetta building and its permanent exhibition on the history of the building and the Hull-Daisetta club, which operated from 1926 until its dissolution in 1982. Built in 1927 and originally an octagonal shaped log cabin, the building was an important community center in early Hull-Daisetta after Hull Field went into full production in 1921, sparking a boom that led Hull and Daisetta to have a combined population of over 4,000 in the 1930s. The event was sponsored by the Lone Star Rotary E-Club, which meets via Zoom in the Southeast Texas Rotary District 5910. Many founding members of the E-Club were in attendance, including current president Ellen Pate and founding member Alana Inman, director of our Sam Center. Also in attendance was District 5910 Governor candidate Amy Killgore.

According to Inman, the Sam Center Library and Research Center has returned to normal business hours, meaning advance reservations are no longer required. The museum and park are also open Tuesday through Friday from 8 a.m. to 5 p.m. and Saturday from 9 a.m. to 4 p.m. With its permanent exhibits, the Rotary Building is always accessible by visiting reception to obtain an access code.

One story caught this reporter’s attention among the many interesting stories about the historic building and the club. This is the story of how a small group of Liberty Rotarians and East Liberty County historians saved and preserved the building. According to long-time Rotarian Bill Buchanan and historian Patti Atkins, the story began when Patti’s father, associated with the Hull Water District, which used the old Rotary building for storage, called it a day , saying the district was considering tearing it down. Before they did, he asked if anyone might be interested in preserving it. Patti said she immediately called Bill Buchanan. Bill said he immediately called fellow Rotarian and friend Norman Dykes

In true Rotary spirit of “service above self” and an old-school “Get It Done” attitude, the three kicked into high gear. Simultaneously, the trio raised more than $5,000 and created a pledge from the Liberty Rotary Club, the Liberty County Historical Commission, and others for preservation efforts and a relocation agreement with the Sam Center to move the building to their property. Time passed and the wrecking crew was reduced, but the fun was just beginning. According to Bill, Norman Dykes, PE, and retired Liberty City manager took the lead. While Norman passed away in 2020, his wife Brenda was in attendance Saturday. She and Bill remembered Norman’s precise engineering drawings of the club building. Bill recounted how Norman personally led the dismantling of the faux fireplace, numbering each brick before cleaning and rebuilding. Buchanan has repeatedly praised Dykes saying, “None of this would have happened without Norman Dykes.”

Moving day finally arrived about 12 years ago; the original moving contractors to whom most of the $5,000 had been paid reneged on the job at the last minute, refusing to refund the money. According to Patti, she received another phone call, this time from Bill. Explaining the situation, which was complicated, Bill finally said, “We’re going to need a little more money: $6,700. Patti asked, “When?”

Bill replied, “By this afternoon to pay the new movers.” The move was in progress.

Accustomed to meeting such a challenge, Patti has moved up a gear. Reminiscent of an oil field project requiring an essential tool on a drilling rig or a rotating fried fish suddenly without enough cooking oil or worse, fish, this project was about to happen. But money was not the last obstacle.

On FM 1011, locally “Governor’s Road”, there were two bridges to cross. The measurements looked good but did not include the height of the bridge abutments. The house was 18 inches too low on the trailer. The new movers needed more old-fashioned cowboy engineering. According to Buchanan, using hydraulic jacks, the movers lifted the building onto blocks aboard the trailer, slowly crossing and repeating the process at each bridge.

Finally, the building was safely delivered to the Sam Center, where Patti was on hand with the $6,700 in cash raised on a Saturday morning. Restoration work would continue for another decade, culminating in today’s exhibit. While the stories of these three people tell only part of the story and are just three of many people involved, they are emblematic of how Rotary works and gets things done.

In Kitty Shivers Key’s 2013 book Hull in a Hand-basket and More, she reflects on how she and her father viewed life in “The Hub of the Universe”. If the Hull area was a hub, the octagonal Rotary building, emblematic of the Rotary logo, was a wheel. These Rotary members stimulated much more than the local economy of Hull.