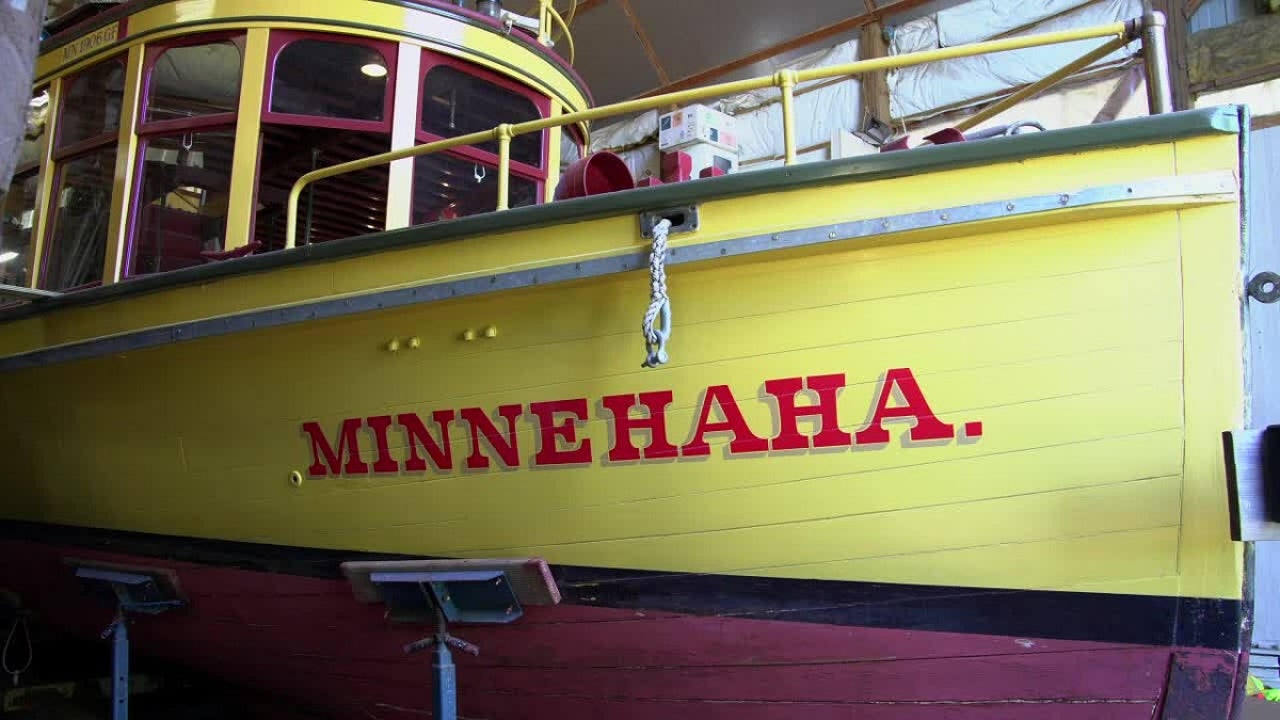 The Lake Minnetonka Museum is looking for a new launch site to help relaunch the historic Minnehaha steamboat.

EXCELSIOR, Minnesota (FOX 9) – In the land of 10,000 lakes, few are as popular as Lake Minnetonka. On a typical day you will find boats of all shapes and sizes, but recently one of the most recognizable has been conspicuously absent.

For the past 3 years the steamer Minnehaha has made a year round home to a storage barn in Excelsior.

“I’m connected to her on so many levels. The first time I rode her I was 3, so she’s really a part of my life,” Person said.

Person started out as a ticket taker on the historic steamship when he was a teenager and eventually worked his way up to captain. He says it’s a shame that such a well-known piece of the lake’s history is in drydock, instead of making waves on the water.

“As far as we know, it’s the only authentic commercial passenger steamer that’s in Minnesota. So it’s really a one-of-a-kind experience. It’s unfortunate,” Person said.

The Minnehaha was built by the Twin Cities Rapid Transit Company in 1906, along with five other steamboats called streetcars. They were painted yellow to match the trams and were used to transport people who lived around the lake to Excelsior and other places, where they could connect to tram lines, so they could get to work in Minneapolis and St. Paul.

“We talk today about BRT, bus rapid transit and all these lines that are on offer. But over 100 years ago we had BRT, boat rapid transit,” Person said.

Tram boats operated on the lake until 1926, when ridership dropped after new roads were built to the lake and cars gained popularity. The company sold one of the boats and scrapped or sank the others, including the Minnehaha.

“It seems a little crazy now, but that was how they got rid of things back then. Everything you can think of is at the bottom of the lake,” Person said.

For 54 years the Minnehaha lay underwater, forgotten and undisturbed until its discovery in 1979. The following year it took several days, a few barges and cranes, 8 airbags and a crew to bring it back from the sea ​​bottom. Lake.

“The plan in 1980 was to raise it and use it as a lakeside dining room for a restaurant at Excelsior. In the 1980s the idea of ​​restoring it to a working steamer became more any idea what to do about it,” the person said.

For the next decade, the boat remained intact until ownership of it finally landed with the Minnesota Transportation Museum. Hundreds of volunteers dedicated thousands of hours to restoring her to her former glory, including an original steering wheel from one of her sister boats and original benches, until she was finally recommissioned as a tour and excursion boat in 1996.

“It was a community effort. So this boat means a lot to the community because of all the sweat and tears and laughter that went into restoring it,” Person said.

Since then, the restored Minnehaha has taken around 10,000 passengers a summer on a journey to an earlier age. But in 2019, the Lake Minnetonka Museum, the nonprofit that owns and operates the boat, lost access to the land used to run the boat in and out of the water, leaving the vintage vessel stuck on the shore.

“I am heartbroken. I was a captain on the boat for 5 years. The family connection goes back to the great-great-grandparents who chartered the boat for my grandparents’ wedding,” said the MLM president, Tom McCarthy.

The museum is looking for another land to use or buy, but lakeside property is an expensive proposition, and the Minnehaha has a unique set of specifications required to launch the boat safely.

“This is not your ordinary boat. 70 feet long with a draft over 6 feet high. We have to get this boat almost half a football field into the lake before it doesn’t float off the trailer,” McCarthy said. .

The steamer Minnehaha on a trailer near the water.

In the meantime, the Minnehaha has been listed on the National Register of Historic Places, which could make it easier to find funding to keep this timeless treasure afloat.

Learn more about efforts to put the Minnehaha back on the water Click here.