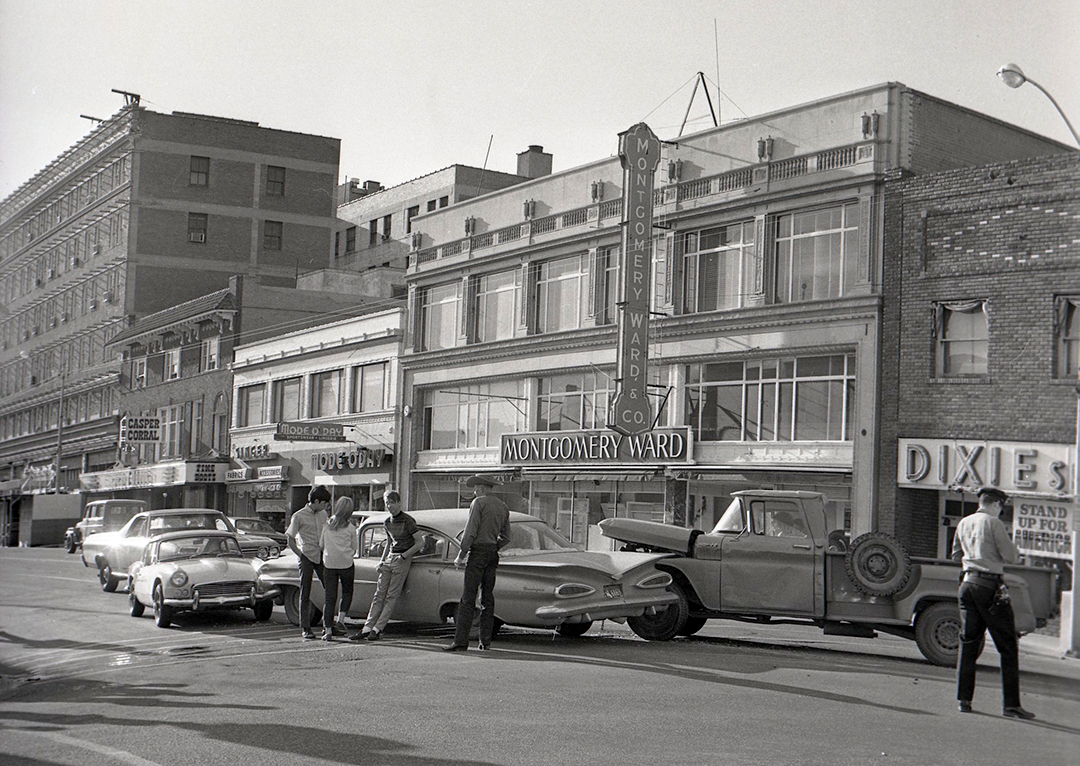 HISTORY: Renovation of a historic building to provide a ‘mall’ experience in downtown Casper

The Montgomery Ward building serves as the backdrop to a multiple car accident at the intersection of Durbin and East Second Street in 1968. The building is said to have become the House of Bargains after Ward moved to the Hilltop Mall. (Chuck Morrison Collection, Western History Center)

CASPER, Wyo. – An almost full-page ad in the February 26, 1976 edition of the Casper Star-Tribune proclaimed what it called an exciting development for downtown Casper.

The House of Bargains, located in the former Montgomery Ward building on the corner of East Second and Durbin, has announced its liquidation following the sale of the building.

“Plans for a major $ 500,000 downtown structure remodel to provide a shopping center on the ground floor, dining rooms in the basement and offices on the two upper floors were disclosed by William Kirkwood, Casper’s independent oil operator, “said the announcement, reading as true report.

Plans for the new “market square” would convert the two 1920s buildings into an air-conditioned multi-purpose facility for “a variety of new stores and businesses,” as well as catering and office options.

House of Bargains, a discount factory furniture store, consolidated its two locations into a 36,000 square foot space in 1970.

Founded in 1872, Montgomery Ward was one of the nation’s largest retailers in the 20th century, and no growing city seemed to be without it at any given time.

The retailer first moved to the corner of Second and Durbin in 1930, when it occupied the basement and first floor of what was then known as the Becklinger Building.

According to accounts at the time, the location also made sense to use as a regional distribution center.

By the late 1960s, the downtown shopping scene was changing rapidly. Montgomery Ward had opened a smaller retail and distribution operation in the new Hilltop Mall neighborhood, and on July 31, 1967, the downtown location was closed.

The 1976 renovation essentially emptied the two buildings in Second and Durbin and completely rebuilt them inside, leaving mainly the facades as reminders of their history. The mid-’70s aesthetic still dominates the interior of what is now the Market Square, with the exception of a large historic clock that hangs above the stairs to the first floor.

Market Square became a victim of Casper’s energy economy when it was nearly foreclosed in 1985. The following year, building and tanker owner William Kirkwood filed for Chapter 11 and refinanced Market Square, as well as other downtown properties he owned.

Kirkwood died on December 24, 2017. In his obituary, he was credited with investing in downtown Casper during its downturn in the 1980s.

In 1984, he was quoted in the Casper Star-Tribune saying, â€œHard times don’t last, but tough people do.

Editor’s Note: Click here for more information on the crash photo used in this article.

Fortier: Despite the disappearance of his former home, the YMCA Meeting Waters remains vital to the community | Chroniclers

Is the Boijmans Van Beuningen repository the future museum?