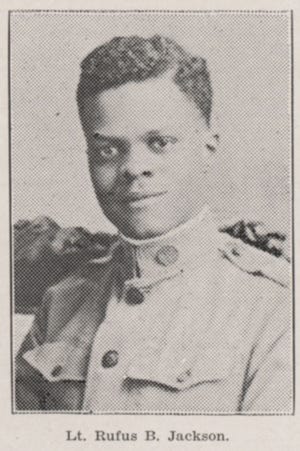 Under a hail of gunfire on a French battlefield during World War I, Second Lieutenant Rufus Jackson of Des Moines crawls forward among the mud and the bodies of his fallen comrades to locate the location nests of German machine guns slaughtering his men.

For his selfless heroism that day, Jackson received a Distinguished Service Cross. But a team of military historians believe his bravery in combat meets the criteria for a Medal of Honor, the highest honor awarded by the US military. He was denied that medal, according to the team, due to racial discrimination at the time.

Iowa columnist Courtney Crowder tells the story of Jackson’s bravery and the work of the George S. Robb Center for the Study of the Great War, based in Parkville, Missouri. His team of researchers is conducting a congressional-sponsored Medals of Valor review to determine whether World War I soldiers were unfairly denied appropriate medals due to racial, ethnic, or religious discrimination.

Courtney also expertly weaves the story of another Iowan and Army veteran, 32-year-old Josh Weston, who is on the Medal Review Team. Weston, who served as a military police officer, battled depression but found new purpose in striving to ensure soldiers who served a century ago received the honors they deserved for their service. heroism.

Throughout our state’s history, tens of thousands of black Iowans and people from other minority groups have served in the military with distinction, only to blend quietly into civilian life without recognition at best. of their sacrifice, or worse, endure discrimination or outright attacks in the country they defended.

If you would like to learn more about the lives and contributions of these soldiersDes Moines offers two great places to start: the State Historical Museum and the Fort Des Moines Museum and Education Center.

Artifacts on display at the Historical Museum, 600 E. Locust St., include a World War I “Roll of Honor” poster that lists 150 black Iowans who served, including Jackson. You can also see the Civil War flag of the 1st Iowa Color Regiment, which was made by black women from Keokuk and Muscatine. Or you can tap into the digital collections of the State Historical Society of Iowa. On his Flickr page, an “Iowa and the First World War” album includes four photos of Meskwaki Nation soldiers and images of black officers at Camp Dodge.

If you visit the Fort Des Moines Museum, 75 E. Army Post Road, you will walk in the footsteps of history. The fort is where, in 1917, this country first assembled a group of black men to train to become officers in the United States Army. According to the Iowa Department of Cultural Affairs, 639 men graduated as newly appointed captains and lieutenants in October. They shipped in June 1918, headed for France to fight on the front lines in World War I.

When the war ended, this first wave of black officers did not give up their leadership skills. James B. Morris became a lawyer in Des Moines and for nearly 50 years published the Iowa Bystander, a renowned black newspaper. He and another Fort Des Moines-trained officer, Drake University Law School graduate Charles Howard, founded the National Bar Association, the nation’s oldest and largest organization of black lawyers and judges. .

“They learned leadership, and they came back and used leadership,” said Kathleen Murrin, secretary of the Fort Des Moines Museum and Education Center board of trustees.

Matthew Harvey, chairman of the board and a former Army lieutenant colonel who served in Afghanistan, said “all black officers can trace their history” back to officers trained at Fort Des Moines.

During World War II, the fort cemented its importance in United States history when it became the nation’s premier women’s Army training facility, training more than 70,000 members of the Women’s Army. Auxiliary Corps.

“We think it’s important for everyone to understand that this all happened in Des Moines, Iowa,” Harvey said.

The museum, run entirely by volunteers, is open from 10 a.m. to 4 p.m. on Saturdays. Visits are also possible by appointment if a volunteer is available. Check the museum’s Facebook page for updates. Harvey said the museum is looking for donations to allow school visits to resume.

I thank the volunteers for their work in highlighting the fort’s role in this nation’s continued march toward racial and gender equality. I am also grateful for the work of the researchers responsible for reviewing the Medals of Bravery to ensure that the bravery and sacrifice of all soldiers receive their just and long overdue recognition.

Carol Hunter is the Register’s editor. She wants to hear your questions, story ideas or concerns at 515-284-8545, [email protected], or on Twitter: @carolhunter.