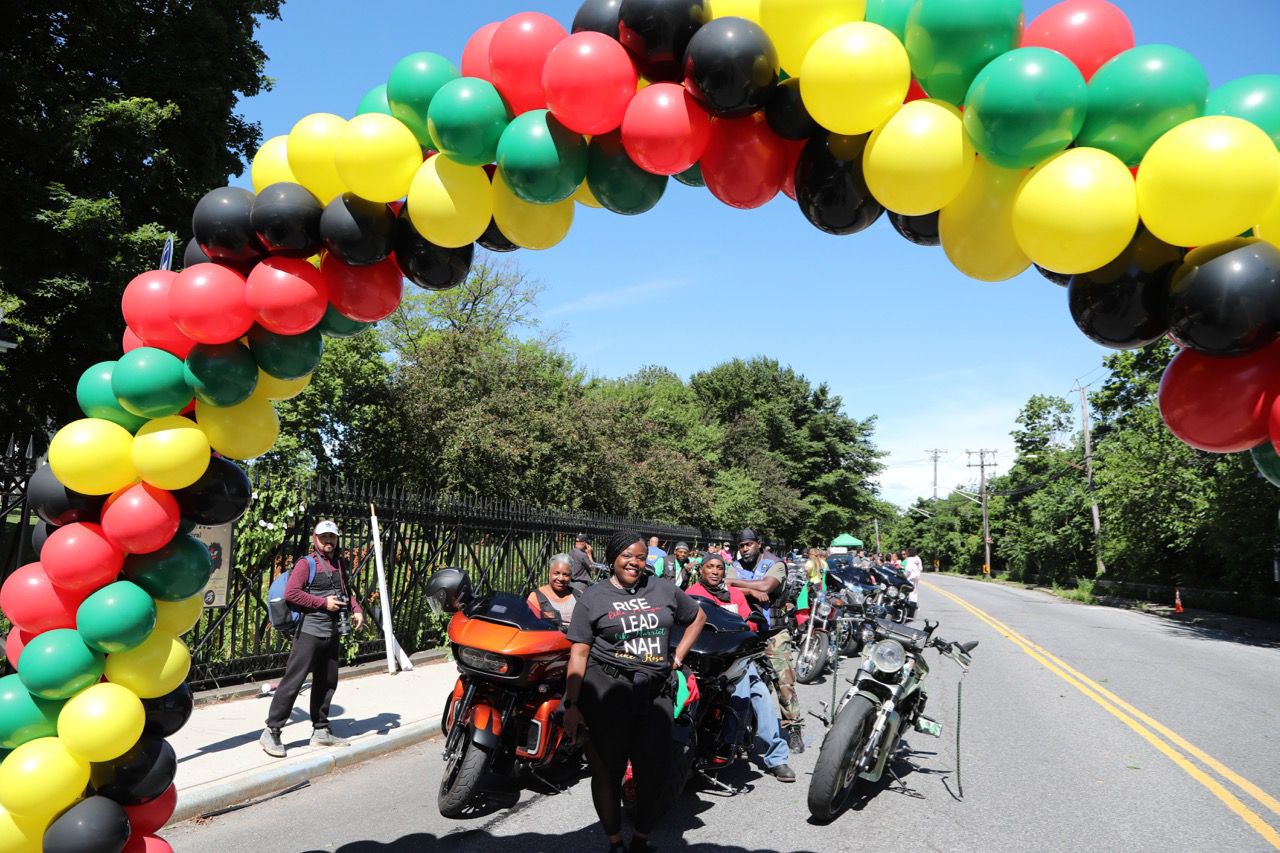 STATEN ISLAND, NY – Black, green and red – the colors representing the black liberation flag – were in the foreground on Saturday during the first-ever June 19 Freedom Parade, along Richmond Terrace, where drummers produced, people danced to the upbeat music, and local organizations marched together in a message of celebration, empowerment, and remembrance.

“This is a historic moment for the whole island. This holiday means something special to us, but truth be told, it’s an American holiday,” said co-organizer Tersa Parnell. “It’s part of our common historical history and so it’s important for all of us to take note because there are lessons to be learned here.”

The Juneteenth Freedom Parade was part of the Juneteenth Freedom Festival, hosted all weekend by the Jubilee Collective, which is a collaboration of 12 different black organizations on Staten Island. The parade proceeded from the Snug Harbor Cultural Center and Botanical Garden in Livingston, along Richmond Terrace to St. George.

Juneteenth, also known as Freedom Day, Jubilee Day, Liberation Day, and Emancipation Day, is a federal holiday to honor the day – June 19, 1865 – all slaves in Texas were told they were free, even though the Emancipation Proclamation was issued more than two years prior in 1863. Originating in Galveston, Texas, it is now celebrated annually on June 19 across the United States.

“We want to educate our community. Not just black and brown people, but we want to educate everyone about Juneteenth and why we should celebrate it,” said Dorcas Meyers, co-organizer of the Juneteenth Freedom Parade and co-chair of the Jubilee Collective. “It’s an effort for everyone to change the narrative because there are a lot of misconceptions about this holiday. We want them to know that we are celebrating our ancestors.

Meyers is proud to put Staten Island on the map by participating in this national holiday. She said, “we won’t be the forgotten borough anymore.”

HISTORY OF THE BOROUGH

There’s a rich history of African Americans on Staten Island since the 1600s, from the historic free black community of Sandy Ground in Rossville to the multiple stops along the Underground Railroad.

“Our ancestors hid there [the Underground Railroad]seeking refuge from the bondage of slavery and 200 years later, on June 16, 2022, we stand humble, united and determined to celebrate on the sacred grounds from which so many have traveled, it’s a full circle moment for everyone,” Dana Walker Boyd, co-president of programming and sponsorship for the Juneteenth Freedom Festival, said.

Many local organizations were present at the parade, including YouthBuild Impact, a group that helps young adults earn their high school equivalency diploma and equip them with skills to join the job market; Gateway National Recreation Areas, a foundation that provides many recreation and learning opportunities to the community; and the Distinguished Gentleman Group, a non-profit organization that helps young men in urban areas be well prepared for every transition in their lives.

“WHAT I FEEL IS PRIDE”

“I couldn’t wait for this to happen. I’m really happy to be here and what I feel is pride,” said Hank Pigeon, as he got ready to roll in his Can-Am Spyder with a black liberation flag hanging from his side. the back.

People watching the parade on the sidelines waved, smiled and clapped in solidarity, while many cars honked their horns in support of the celebration. Nearly a hundred paraders and bikers took to the streets along Snug Harbor with flags, drums and dance moves as they marked the historic event.

“I feel amazing because…not just for my race, but it’s just…I’m with my people. It’s just wonderful to be around older/younger people of color” , said Justin White, an 18-year-old Port Richmond resident who participated in the parade.

After the Juneteenth Freedom Parade kicked off, the Jubilee Collective hosted a Juneteenth reenactment and flag raising at noon inside the National Lighthouse Museum in St. George in conjunction with Universal Temple of the Arts.

The grand finale to conclude the Juneteenth Freedom Festival will take place on Sunday in Snug Harbor. The celebration and commemoration will include a drum circle, Jubilee Day re-enactment, Father’s Day activities, health and wellness booths, crafts and musical performances.

Free passes to the Staten Island Children’s Museum are available for the day (11 a.m. to 3 p.m.) by registering here.