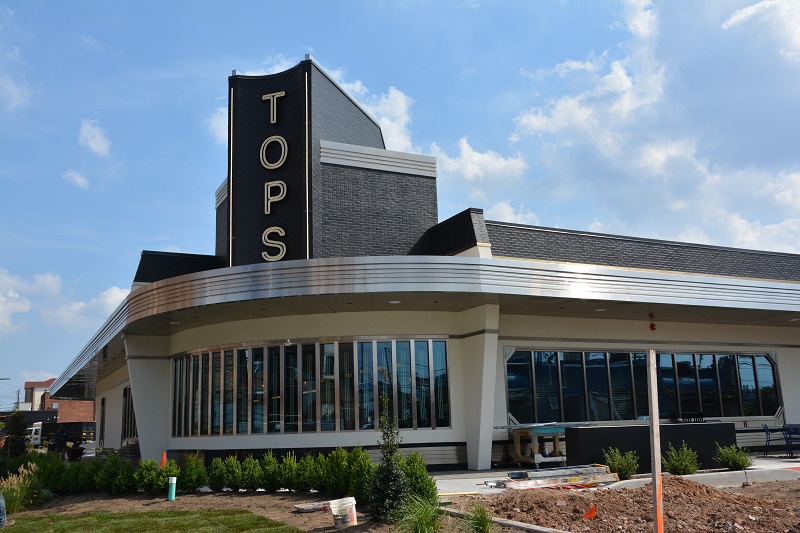 A new era in the history of the dinner capital of the world is about to open in East Newark: the new Tops Diner. New Jersey has never seen anything like it, and the new structure will set a gold standard and take the Garden State’s restaurant concept to the next level.

The old restaurant is being demolished and will be replaced by a parking lot. Tops will be located in the same location, at the intersection of Passaic and Central avenues in East Newark, next to the Clay Street Bridge and a short walk from the Passaic River. Plans call for a “smooth” opening of the new restaurant by the end of September. Hours of operation will be 8 am to midnight, seven days a week. Takeout orders, which represent a significant portion of the restaurant’s daily operations (approximately 20%), will continue.

The first thing motorists will see as they approach the restaurant is the somber and majestic Tops Tower, which crowns the roof, and a dazzling, rigid stainless steel canopy that surrounds the restaurant’s facade. The exterior will have large windows, stainless steel panels and accents, and neon lights. Space along the perimeter will allow for outdoor patio-style dining, and parking at the front and rear of the restaurant can accommodate 165 cars. The overall design is an almost mirror image of the architectural concept design unveiled by Jimmy Golemis over two years ago.

The interior design is highlighted by a stunning counter of 18 stools adorned with black marble, serving a full selection of cocktails, beers, wines and spirits. The spacious 15,900 square foot interior with a high ceiling can accommodate a variety of tables and booths, with capacity for 300 guests, and the interior’s most artistic feature can be seen when you look down: a authentic, four-floor in tone-on-tone terrazzo, created by Sicilian artisans. Early in planning for the project, Golemis determined that installing terrazzo flooring was a priority and a nod to the Garden State dining tradition. Many vintage 20th-century factory-made restaurants had elegant terrazzo floors, a source of pride for family businesses. Unfortunately, most modern, on-site diners refrain from including terrazzo floors, mostly for cost reasons.

The restaurant’s most impressive interiors will, for the most part, be invisible to guests: a gleaming world-class stainless steel kitchen; a complete bakery with several ovens for baking artisan bread, pastries, pies and cheesecake; and separate stations for gourmet coffee and espresso; filtered water; and ice cream. Tops is wired with a network of advanced computing resources to run the business.

How widespread is Tops’ acclaim as a favorite haunt for Jersey customers and travelers? The evidence is clear from the restaurant parking lot on any given day: Half of the cars have out-of-state license plates. The Golemis family used this well-deserved popularity as the basis to create something spectacular, although the restaurant stays true to the culture and spirit of New Jersey restaurants.

As previously reported, the Garden State restaurant circuit has experienced a spontaneous â€œrenewal seasonâ€ over the past three years, with significant capital investments to redesign and modernize many of these well-designed roadside attractions. loved. Tops puts an exclamation mark on this trend. Historically, going back to the 1950s, New Jersey has seen its share of lavish full-scale restaurants with expanded seating, including the Circle Diner, on Route 31/202 Flemington Circle; the original Olga’s Diner, in Marlton; the original Ocean Bay Diner, in Point Pleasant; Mastoris Diner in Bordentown; the Tick Tock Diner in Clifton; Geets Diner, in Williamstown; and the Point Diner in Somers Point.

The Golemis family revealed plans to Jersey Bites for the new restaurant in November 2019, replacing the familiar silver and blue edifice that has evolved as a landmark for restaurant enthusiasts throughout New Jersey and beyond. .

This blogger’s 2019 book, Stories from New Jersey Guests â€” Monuments to the Community, published by The History Press, reported that Tops history dates back to 1938 when a man named Jess P. Persson (1884-1946) operated Tops Grill in the same location as today’s restaurant. It is likely that prior to 1938 Persson also had a mobile meal cart at or near this same site. The Golemis family bought Tops in 1972 and oversaw several major expansion and renovation projects, forging a reputation as a top-notch restaurant. The new Tops Diner is the crowning achievement of this tradition.

Behind every work of art hides a story. Sometimes these stories have not been known…