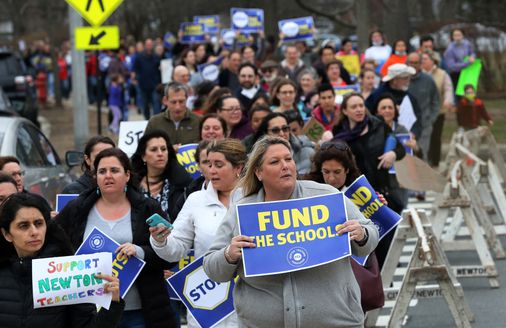 “Our kids haven’t fully recovered from the pandemic,” Montague said. “Now is not the time to make cuts to the staff and services that support our children as they continue to recover.”

Fleishman, who warned staff early last month of the potential cuts, said in a March 23 budget update that officials were doing everything possible to limit the impact of the job cuts.

The proposed cuts sparked a protest last week from teachers at Newton Town Hall, as well as opposition from the school board, which passed a resolution calling for additional funding to avoid losses. A dozen city councilors also called on Mayor Ruthanne Fuller to use federal pandemic relief funds to fill the budget shortfall.

Fuller reported that public school enrollment in the city has fallen by about 1,000 students over the past five years. She said in a statement late last week that Newton would continue to invest heavily in students and educators, “but must remain lucid about this reality” of declining enrollment.

Fuller said using one-time funding to address the school’s structural budget deficit is not responsible, and that postponing these “tough decisions” will only cause more disruption in the years to come. to come.

Fuller called the proposed job cuts “painful for the people in these roles, painful for our community that wants resources not to be a constraint, painful after two difficult years of COVID, and painful as we realize that the enrollment trends can lead to more difficult choices.”

The proposed budget keeps many university programs in place, Fleishman said, and would also add about 13 positions for expanded and new special education programs next year.

But the proposed cuts would include reductions in literacy and math support for elementary and middle schools, Fleishman said.

Counseling would be reduced in middle and high schools, and there would be larger classes, he said.

High schoolers would likely have fewer electives, while some middle school teachers would teach classes outside of their primary area of ​​specialization, Fleishman said.

Across the school system, there would be cuts to the K-8 curriculum and instructional leadership in virtually every subject, he said.

The budget gap was initially $5.2 million, and Fleishman said that figure was lowered due to additional COVID reimbursement funding from the city.

Newton received more than $60 million in federal funding for pandemic relief, and public pressure mounted on Fuller to use some of that money to fill the gap.

Newton Public Schools enrolls about 11,700 students and employs about 2,500 employees, depending on the school system. The system staff includes approximately 2,100 full-time workers and nearly 400 part-time workers.

The city has allocated a $262 million budget for schools next year, an increase of about 3.5%, or $9 million, from the current year, according to Fuller, who s abstained from voting last week on a school committee resolution calling for more funding.

The resolution, which was backed by the other eight council members, called the proposed cuts ‘too deep and too painful’ and next year’s budget ‘not enough to keep schools running without serious negative effects. on our children.

Twelve councilmen, in a letter to Fuller on Monday, also said they support the school committee’s resolution.

The advisers wrote: “We believe that continued or increased funding for staff resources at a critical time to get childhood development back on track is a short-term but necessary expense,” according to the letter, which was provided by the City Clerk’s Office.

At a public hearing held Monday by the school board, virtually everyone who spoke to officials said the cuts would put more pressure on educators, increase class sizes and reduce the number of student support staff. .

Alison Lobron told the council that the kids were still struggling and she said she was struggling to accept a budget that would eliminate about 50 positions.

“I disagree that this budget reflects the fact that our children’s education is a top priority. Our schools are in crisis on many levels,” Lobron said.

Some parents have shared poignant personal stories of their children and classmates who have battled the pandemic, and the emotional and social impacts of the health crisis. Others said the city should tap into its financial strength and resources to address budget issues, and spoke directly to Fuller.

Philip Koesters said the shortfall is only a small part of a $262 million budget, and Fuller should be able to find a way to close the gap without the cuts.

“It’s Newton. We’re a very wealthy community. We have a AAA rating, as you constantly point out. We can do it. You, Mayor Fuller, can do it,” Koesters said.

“Mayor Fuller, I understand you were unwilling to spend some of the remaining money to cover these costs, citing that one-time funding should not be used to repair a structural deficit,” McLaughlin said. “But wasn’t that exactly the reason ARPA was funded in the first place?” Surely it was not intended for street tree preservation or cultural events.

Fuller said the city has provided millions of dollars in ARPA relief funds to fund this year’s school budget, as well as workers’ allowances, school services and school projects.

The city also used millions from a separate allocation under the federal CARES Act for new school building ventilation systems and COVID-19 testing.

The public hearing followed Thursday’s demonstration by members of the Newton Teachers Association at Newton Town Hall to protest the cuts. The union represents around 2,000 workers and protesters marched around the building carrying signs while chanting “Stop the cuts”.

About 350 people attended the rally, according to Newton police who were at the scene.

Sheryl Rice, a teacher at Bigelow Middle School, said the cuts will put more pressure on remaining staff, who will have less time and do extra work.

“Children are who [will] to suffer. They won’t have the same experience as kids three years ago, or even kids right now,” Rice said.

Andrew Steinberg, an alumnus of Newton Schools, also demonstrated in support of the city’s educators.

John Hilliard can be contacted at [email protected]