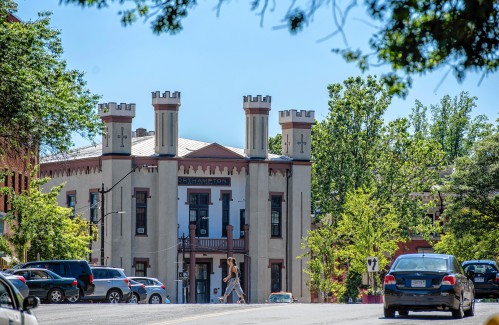 Northampton voters can weigh in on a $126million budget

NORTHAMPTON – The public will have several opportunities to weigh in on Mayor Gina-Louise Sciarra’s first budget proposal, a $126 million package that increases spending on schools and public health while raising property taxes by 2,000,000. 5% and projecting lower revenue for parking and marijuana.

The city council’s finance committee will hold virtual public hearings May 31 and June 1 at 6 p.m., and full council is scheduled to deliberate June 2 at 7 p.m.

Before Sciarra presented its budget on Thursday evening, councilors passed an order changing the responsibilities of the Department of Health as well as its name. The title of Director of Public Health Merridith O’Leary has become Commissioner of the Department of Health and Human Services (DHHS), a team of experts with an expanded role in combating not only public health, but also against the causes of health inequalities.

The ordinance also codified the Department of Community Care (DCC), an unarmed emergency response alternative to the police, into the city government structure under the responsibility of DHHS. DCC will not have a separate budget, but the money is included in Sciarra’s plan for DHHS to cover DCC operations and personnel.

Sciarra’s plan calls for an influx of spending for DHHS, which is the largest dollar increase of any department except schools. The $1.26 million for DHHS represents a jump of 112%, or $666,019, from last year’s allocation.

When Mayor David Narkewicz presented the current year budget last summer, the final budget of his decade in office, he said 49% of Northampton residents were fully vaccinated against COVID-19. A year later, 81% are fully vaccinated and 56% have received at least one booster, according to the city’s online COVID-19 dashboard.

In a letter to council she read aloud on Thursday, Sciarra wrote that the pandemic “has radically changed expectations about local public health responses across the country,” including Northampton.

Sciarra’s letter also warned that while the public schools budget will increase by 5.07%, it is heavily dependent on school choice reserve funds and temporary federal aid.

“Using reserves in excess of incoming revenue and one-time federal funds to such a degree will create a gap that will exceed the city’s ability to generate additional revenue to cover it,” Sciarra wrote, “and I am concerned about our ability to maintain our educational programs and enrollment at current levels for years to come.”

Sciarra wrote that Northampton Fire Rescue has seen a 14% increase in calls for service in the current financial year, which ends next month. The department’s budget is climbing to keep pace with fuel and supply costs.

Fire Rescue employs 68 people. This year, EMS personnel transported nearly 1,000 COVID-19 patients or people with symptoms and doubled their mutual aid responses from the previous year in other communities to 400 calls, Sciarra wrote.

Sciarra did not recommend any rate increases for water or sewer services.

Councilors conducted their second reading of several pending financial resolutions and ordinances before passing them on Thursday evening.

Historic Northampton will receive $173,000 in Community Preservation Act funds for the ongoing Shepherd Barn preservation project, while $664,068 from the CPA will go to Valley Community Development Corp. to support the creation of approximately 60 affordable apartments in the former Northampton Rehabilitation and Nursing Center at 737 Bridge Route.

The council passed an ordinance that allows the city to seek special legislation from the state that would prohibit Northampton landlords from passing on rental brokerage fees to prospective tenants. Tenants could still hire brokers if they wanted to, but a landlord who hires a broker would be responsible for paying the associated fees.

Ward 5 Councilor Alex Jarrett, who co-sponsored the order with Mayor Sciarra and Ward 7 Councilor Rachel Maiore, said a broker’s fee is typically 60-75% of a month’s rent and due before moving in, placing an additional burden on tenants who already pay several thousand dollars upfront.

Another request for special legislation will ask the state for permission to introduce ranked ballots in local city elections.

The council also passed an ordinance authorizing the borrowing of $22.5 million for “the construction of a sludge dewatering system, clarifier, plant water system and a SCADA”. [supervisory control and data acquisition] upgrades to the city’s wastewater treatment plant” to keep the facility in compliance with state and federal regulations.

A recently passed resolution calls on the federal government to reverse plans to close the VA hospital in Leeds. A copy of the resolution will be sent to President Joe Biden, Veterans Affairs Secretary Denis McDonough and many other officials in Washington.

Brian Steele can be contacted at [email protected]

£2.4million transformation of historic building in Coventry, which was the country’s first car factory, is approved