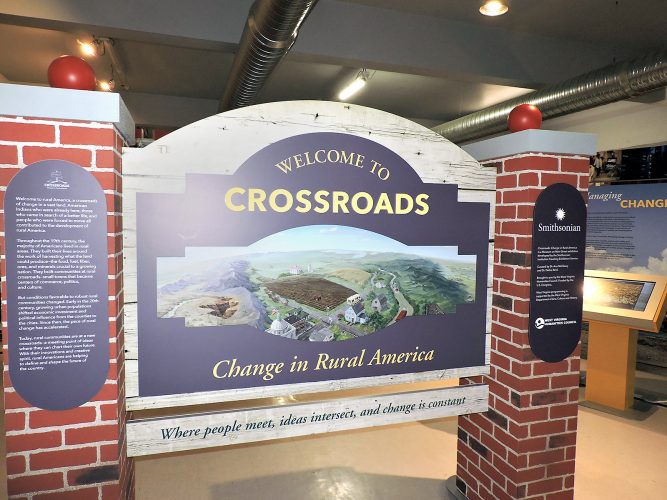 Opening of a new traveling exhibition at the Weirton Museum | News, Sports, Jobs

Craig Howell TRAVELING EXHIBITION — “Crossroads: Change in Rural America” is a traveling exhibition presented in Weirton in cooperation with the Museums on Main Street program of the Smithsonian Institute and the West Virginia Humanities Council. Weirton is one of seven West Virginia communities selected to host the exhibit.

WEIRTON – In many ways, the community of Weirton is at a crossroads in its history, and a new traveling exhibit now at the Weirton Area Museum and Cultural Center can provide some pointers by examining where the area has been and where it has been. could go.

“Crossroads: Change in Rural America,” is an exhibition made possible by the Museums on Main Street program of the Smithsonian Institute and the West Virginia Humanities Council.

He began his five-week residency at Weirton on Monday evening, with an opening reception including a ribbon cutting, three guest speakers and more.

“We have this tremendous identity shift that we are going through,” Savannah Schroll-Guz, president and executive director of the Weirton Museum, said the exhibit will help residents build a dialogue as they learn about local history and have the opportunity to compare themselves to others. communities across the country.

Weirton is one of seven West Virginia communities selected to host the exhibit, and Guz, the museum’s board, and volunteers organized a full range of activities to complement the traveling exhibits.

“There is something happening every weekend” she noted.

Some of those activities kicked off Monday, with a historical presentation by Paul J. Zuros, director of Historic Fort Steuben and columnist, who referenced other crossroads in Weirton’s history and provided insight into some of the figures. community histories who recounted their experiences.

“Our region has undergone huge changes in a relatively short time,” he says, explaining that much of today’s Weirton was mostly farmland just over 100 years ago.

He read the words of Louis Truax and Mary Shakely Ferguson, who wrote their observations as Hollidays Cove transformed from a small farming community to an incorporated municipality and eventually part of what would become the town of Weirton, as well as the establishment of Weirton Steel, a local oil boom, the immigration of European workers to the area, the arrival of automobiles, the construction of Pennsylvania Avenue, the first telephone operations and more.

He also spoke of Cyrus Ferguson, considered Weirton’s first millionaire, who established meat markets in Wellsburg and McDonald’s, discovered the Hollidays Cove oilfield which is believed to have produced up to 6,000 barrels a day at a time and would have been among the largest deposits in the world. Ferguson also owned 1,700 acres of farmland, selling 105 to ET Weir for the establishment of the future Weirton Steel, and setting up 160 lots for the development of much of present-day Weirton town centre.

Mike Swartzmiller of the Top of West Virginia Arts Council spoke about the growing arts movement in the community, with the Weirton Event Center reportedly drawing thousands of visitors to the city, and the creation of the Summit Art Gallery and a neighborhood des arts designated in Weirton.

He noted the potential for the arts to tie into economic development, pointing to some of his own online art sales over the past two years, bringing in $1,800 in state sales tax.

“There are thousands of artists in the state”, he said, encouraging those gathered to support the dream of a thriving arts culture in the region.

Fred Marsh and his family were also on hand to help unveil the museum’s newest exhibit; an exhibition dedicated to the 100 years of Marsh Supply Co.

“There is a lot of history there” Marsh said, explaining what led to the decision to close the store last year, but also returning to the ties between the business and the Weirton community. “I think we’ve touched everyone’s life here in one way or another, and you’ve touched ours.”

Guz said there were enough items provided for the exhibit that the museum could rotate parts of the exhibit over time.

Other planned events include:

11 a.m., February 5 “Agrotourism, Century Farms and Homesteads: How They Started, How They Adapted to Changing Times,” featuring a panel discussion with representatives from The Blended Homestead, Family Roots Farms and more.

10:00 am, March 5, kid-friendly museum scavenger hunt and celebration of Weirton’s 75th anniversary as an incorporated town.

The exhibition will end on March 7.

Today’s breaking news and more to your inbox