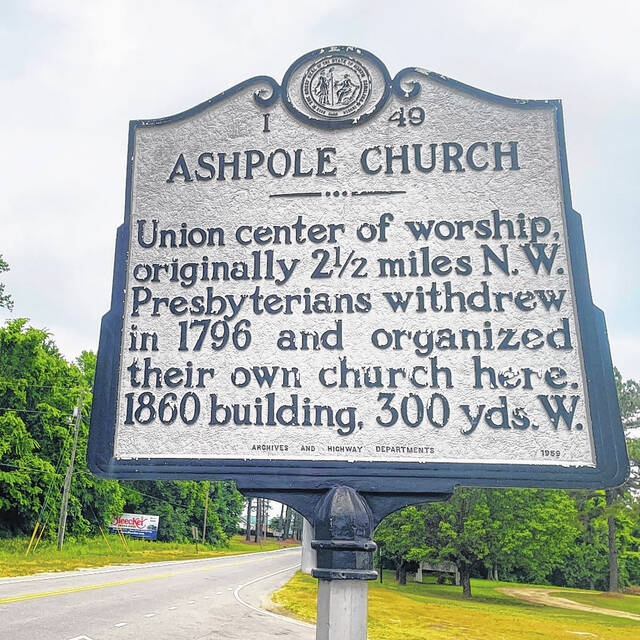 PROJECTOR: The inscription on marker number I-49 reads: ‘ASHPOLE CHURCH. Union worship center, originally 2½ miles northwest. The Presbyterians withdrew in 1796 and organized their own church here. Building from 1860 to 300 m. W.”

The story: Ashpole Presbyterian Church is a historic Presbyterian church near Rowland, according to the church’s Facebook page. The church was built from 1860.

“The two-storey building comprises, three bays by five bays, a frame church in the Greek Revival style,” according to the church’s history. “It has an octagonal belfry with a concave cap roof that rests on a high square base. Behind the church is a modern educational building. Also on the property are the one-and-a-half-storey rectory, a square hipped-roof well, and a two-storey barn.

According to information from the National Society of The Colonial Dames of America in the State of North Carolina (NSCDA), the church was built on land owned by James Robert Adair, who came to America as an Irish settler in 1730. Adair first emigrated to Pennsylvania. then Green County in North Carolina. Adair’s story indicates that he was a “glamorous early settler, writer, explorer and patriot”. He eventually settled and died in Robeson County, according to the NSCDA.

Originally, the Ashpole Church building was constructed of logs with “hand-hewn pine beams held together with handmade dowels and nails,” according to the National Register of Historic Places.

The church takes its name from the Ashpole community founded in 1750 by Scottish settlers.

“Some of the early preachers rendered their services in Gaelic for the benefit of non-English speakers in the congregation,” according to NSCDA information.

The church was added to the National Register of Historic Places in 1982.

THIS WEEK IN ROBESON COUNTY HISTORY

100 years ago: The Robesonian of May 4, 1922 included the following headline and story: Lumberton Joins Baseball League. Lumberton will have baseball again this year. The Interstate League, consisting of the towns of Lumberton, Maxton, Laurinburg, Raeford, Hamlet and McColl. SC, was organized yesterday in Laurinburg.

50 years ago: The Robesonian of May 4, 1972 reported the following: ‘May Queen’ is chosen in Pembroke State Event.’ PEMBROKE — On a beautiful spring day, Vickie Ransom, wearing a beautiful pink dress, was chosen from 14 applicants as Pembroke State University’s “May Queen” here Monday.

25 years ago: The Robesonian of May 4, 1997 reported the following: Relay raises $100,000. LUMBERTON — Rain and wind cut short the final hours of the American Cancer Society’s Relay For Life at Lumberton High School on Saturday. But organizers say mother nature was no match for the fathers’ time. The charity was able to raise around $100,700, double this year’s goal, before bad weather interrupted the event.

Five years ago: The Robesonian of May 6, 2017 reported the following: Cooper vetoes animal husbandry legislation. RALEIGH — Gov. Roy Cooper vetoed legislation Friday limiting certain damages in civil lawsuits brought by neighbors of hog and poultry farms if a court determines the stench of animal waste is officially a nuisance.

One year ago: The Robesonian of May 8, 2021 carried the following: Millions of dollars hanging on a deal. LUMBERTON — Robeson County has joined more than 80 governments across the state in the fight against opioids, but has yet to sign an agreement that could earn the county millions of dollars to help do so.