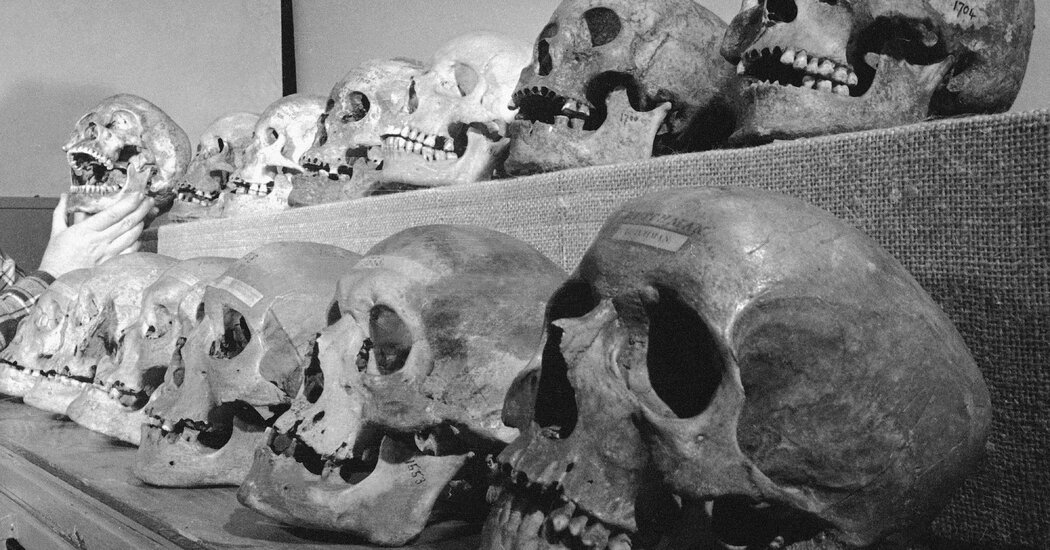 More than 175 years after his death, a man named John Voorhees could finally have a proper burial.

Mr. Voorhees died of consumption or tuberculosis in a poorhouse in Philadelphia in 1846, when he was 35 years old. But, after his death and without his consent or knowledge, his remains ended up in the hands of Samuel George Morton, a 19th century physician and anatomist known for his influential racist theories about the intellect.

Mr. Voorhees is one of 13 black Philadelphians whose skulls were subjected to Mr. Morton’s experiments. In the fall, the University of Pennsylvania’s Museum of Archeology and Anthropology, known as the Penn Museum, hopes to provide them with a traditional burial ceremony they say is long overdue. Students have been demanding for years that the remains be returned to descendants.

“This is a really important time to do the right thing and acknowledge the problematic history of some parts of this collection,” said museum director Christopher Woods, who has held the Morton collection since 1966. “These individuals have were taken in under absolutely terrible circumstances – Morton preyed on the most vulnerable and weak in society.These people should be buried.

The 13 skulls were just a small part of Mr Morton’s extensive collection of some 1,300 skulls from around the world. Dr. Morton’s studies laid the foundation for the now discredited “race science” that contributed to 20th century eugenics. His collection would be the first—and, at the time, the largest—scholarly anatomical collection in the United States. The Guardian reported the burial plans this week.

Part of the collection was displayed prominently in a museum classroom until 2020, when a group of students revealed about 50 skulls were from enslaved Africans in Cuba and asked that the bones be returned to the descendants. The museum moved the exhibited skulls into storage with the rest of the collection.

Now the museum is asking the Philadelphia Orphans Court to bury the 13 skulls in Eden Cemetery, a historically black cemetery in the city. If burial is approved, Woods said, the museum plans to hold an interfaith public ceremony at the cemetery this fall. The museum would then turn to repatriating the skulls from Cuba, he said.

Little is known about the 13 black Philadelphians, and Mr. Voorhees is the only identified person outside of the group. But a 2021 report found that some of them were likely enslaved and their remains came from where the Penn Museum now stands: the museum was built on the former site of the Blockley Almshouse, a charity hospital. The skulls of black Philadelphians were likely taken from unmarked graves at the hospice.

“I think this is a really important time for museums and an extremely important time for descendant communities,” said Samuel J. Redman, associate professor of history at the University of Massachusetts Amherst and author of ” Bone Rooms”, a story of remains collectible in museums.

Because Mr. Morton was “obsessed” with white supremacist views, Dr. Redman said, it was extremely important for Mr. Morton to document the race of these individuals. Mr Morton, Dr Redman said, received remains from “interested persons” around the world, operating in a “dark, gray market in remains that were bartered, bought or stolen for money”.

But, said Dr. Redman, “Morton is only the tip of the spear.”

The potential burial of the 13 skulls comes amid a broader discussion over the repatriation of the remains of Black Americans. Morton’s skulls represent only a fraction of collections of remains across the United States, with others including those at Harvard University, the Cleveland Museum of Natural History and the Smithsonian Institution, including the National Museum of Natural History houses the largest collection of human remains in the country. Of the 33,000 remains on Smithsonian storage, about 1,700 are believed to belong to African Americans.

But some think that the Penn Museum should not be the guardian of these remains at all. Abdul-Aliy Muhammad, a community organizer and writer who uses non-binary pronouns, was a member of the museum’s advisory committee on the repatriation of remains. They criticized what they called the museum’s “rushed” decision-making and said descendant communities should decide what happens to the remains. They lodged a formal objection with the orphans’ tribunal which says the same.

“Penn’s role is to give us resources, and that’s it – to bear witness to this process but not to be part of it,” they said. “They shouldn’t be the ones deciding how a healing process unfolds. These are simple mathematics of oppression.

Morton’s skulls and other collections respond to broader calls from scholars and African-American communities for legislation similar to the Native American Graves Protection and Repatriation Act of 1990, which requires museums to return remains to tribes and tribes. descendants who request it.

“It is time to have a broader conversation about the nature of this story and the vast, complex and dark legacy of human remains collection that has not been fully addressed,” Dr Redman said. “Where we are now with the situation is not sustainable.”

Michael Blakey, co-chair of a commission on the ethical handling of human remains at the American Anthropological Association, agreed. Dr Blakey, who is an anthropologist at the College of William and Mary, was the scientific director of the African Burial Ground in New York.

“My colleagues have demonstrated no scientific value in this particular collection,” he said of Morton’s skulls. “Ultimately, there needs to be a discussion, not only about the ethics of holding human remains without the informed consent of their descendants, but in that discussion we should weigh the value, or lack thereof, of that here, of the research that could be carried out.”

Shanna Williams, an associate professor of biomedical sciences at the University of South Carolina, called the decision to bury Black Philadelphians in the Morton Collection a “smart first step” and was wary of calling it a sea change in how museums approach repatriation. . But their burial could represent a new way of approaching archival human remains. For many of these skeletons, like that of Mr Voorhees, “consent was not part of the equation”, Dr Williams said.

“As a scientific community, we put identity first,” she said. “We move from the idea that individuals are objects and make them subjects. This is when an individual’s personality returns.