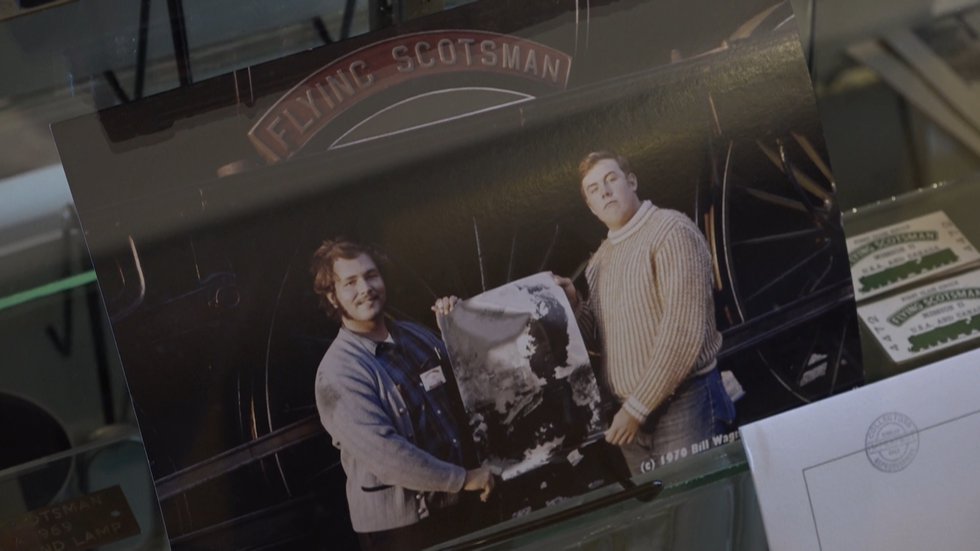 SLATON, Texas (KCBD) – In his youth, it was common for Bill Wagner to spend his spare time following trains.

In the summer of 1970, Wagner, then a student at Bradley University in Peoria, Ill., And his friends decided to take the ultimate road trip – a hike across the country with the Flying Scotsman, a British steam engine built in the 1930s.

“I was a railroad enthusiast at the time, I was interested in trains,” he said. “The train spent the winter here in Slaton. I was an unemployed student, a friend of mine was an unemployed carpenter. And, I thought we were going to volunteer and bring the exhibit to Slaton, and we did.

This “Railfan” exhibit features a miniature train diorama, a sculpture of a railway spike and photos from across the country. Wagner and his friends packed his toy car and followed the train. That’s not to say there weren’t any challenges, especially when it came to paying for the trip.

“We had enough money for gasoline to go to Slaton and come back, and ended up doing a few odd jobs and finding new ways to make money and stayed with the train all summer. We ended up crossing the Midwest to Canada, ”said Wagner. “The only thing we did in town to make money here was to go to Lubbock and sell our blood to a blood bank. We were eventually hired by the train. We were making five dollars a day. And we did a lot of odd jobs on the train.

During the trip, he took hundreds of photos. It was decades before the arrival of Facebook and Instagram. With the high cost of film, every photo had to count.

“The problem back then was that the movie was expensive, and we were broke kids, so every frame – you could see the dollar signs popping up, every time you clicked the shutter,” he said. -he declares.

Even after keeping the slides for over fifty years, he finally released them to the public. One in particular caught the attention of Tony Privett, president of the Slaton Railroad Heritage Association.

“I finally bought a digitizer last year and spent about six months digitizing all of my slides,” Wagner said. “Tony saw one of them that I posted on Facebook in response to the other post. He came into contact with me, and it all came from this chance encounter.

The aforementioned photo is an exterior photo of the north side of Slaton’s Harvey House, which was then a place to feed those on the railroad. From 1969 to 1970, the House was frequented by the British crew in charge of the Flying Scotsman.

Wagner’s photos are on view at Maison Harvey until March 31. The exhibition is free to the public. In addition to the sightseeing tours, tourists can also purchase a small book, which details trips through Wagner’s country starting this summer.

After his memorable trip, Wagner completed his studies at Bradley and would pursue graduate studies at the University of Texas years later.

“Really after the Flying Scotsman there was no point in continuing to be a serious ‘rail fan’ of any sort. I would never be able to outdo it that summer, so why bother trying? “, did he declare.

Photos and memorabilia will remain on display at Slaton Harvey House until March 31.