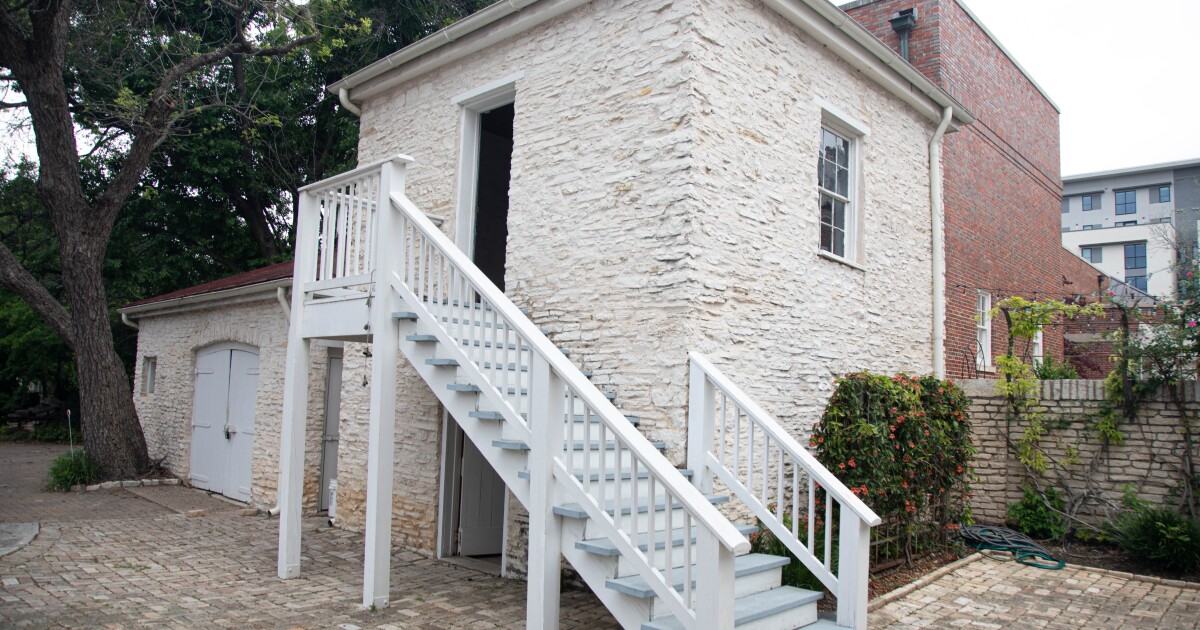 When Joe McGill visits Austin this weekend, he won’t be sleeping in a hotel or Airbnb like most travelers do. Instead, he’ll roll out a sleeping bag on the floor of a small, 167-year-old stone building and spend the night in what’s believed to be the only intact slave quarters in Austin.

“That’s what I do,” he said. “I find slave dwellings all over the country and ask the owners if I can spend the night in these spaces.”

McGill is the founder of The slave housing project. He travels the country to sleep in places where slaves once lived in order to draw attention to these spaces and the history of slavery in the United States. It also organizes presentations and discussions. on racism and racial equity that are open to the public. The project began 12 years ago when McGill, which does preservation work in South Carolina, noticed how sites, such as plantations or estates, often leave out stories of the slaves who lived there.

This weekend, McGill is staying in the slave quarters at the Neill-Cochran House Museum, a Greek Revival house built in 1856 that now hosts exhibits of Austin art and history. Hundreds of UT Austin students walk the site daily. Located on San Gabriel Street in the heart of West Campus, the museum is surrounded by student apartment complexes and sorority and fraternity houses.

With researchers from UT Austin, the museum has started a project called “Reckoning with the Past: The Untold Story of Race in Austin.” Over the next year they will restore the slave quarters to their pre-war appearance and create exhibits and tours that focus on the structure’s connection to slavery in Austin. McGill’s visit this weekend marks the start of the project. the two day event includes talks and presentations on historic preservation and racial equity, as well as museum tours and community events.

“Most people don’t know [the slave quarters are] here,” said Rowena Houghton Dasch, the museum’s executive director. “It is the last intact slave home in Austin and a resource for all of us who would like to better understand our city’s past.”

What is now known as the Neill-Cochran House Museum, named after the two families who lived there the longest, was originally an estate built on nearly 18 acres of land. In 1855, Washington and Mary Hill, a young married couple, commissioned established builder Abner Cook to build the house northwest of Austin. Cook, who was the architect behind several other historic sites in the city like Woodlawn and the Governor’s Mansion, used slave labor in his designs.

Like most white residents of the area at the time, the Hills were slavers. Their property included slave quarters outside the main house where the slaves worked and lived. The house was an expensive business for the Hills, and they struggled to keep it. They took out loans and sold five enslaved people to help pay. But when the house was finished, the Hills immediately sold it and never moved in. Over the next two decades, the new owners leased the site to various tenants, who brought slaves with them.

After the Civil War, new families who moved in used the former slave quarters for other purposes, and the history of the addiction was lost over time, Dasch said. When the National Society of The Colonial Dames of America in the State of Texas, the organization that turned the property into a museum, purchased the site in 1958, its former residents, the Cochrans, used the outbuilding as storage space. The family thought it might have been an old smokehouse, Dasch said.

Then, around 2016, Dasch was researching and writing about the house when she realized that the original house had no space dedicated to house maintenance – no space for laundry. , cooking or storing cleaning products. So, she realized, all these things must have been done in buildings outside the main house. And by the time the house was built in the 1850s, a third of Austin’s population was enslaved. This domestic work would have been done by slaves, she concluded, and they would have lived in dependency.

“Once we realized what we had here, what we were stewards of,” she said, “it became, very quickly, very clear for us it was a story that we had to be able to share with the public.

Dasch reached out to Tara Dudley, an assistant professor at UT Austin’s School of Architecture, to help research and tell the story of this building. Over the past few years, the two, along with UT students, have delved into the history of the structure, determining what it was used for and who lived there.

Dudley says much of “Reckoning with the Past” will tell the stories of the slaves and laborers who inhabited space. One of the slaves that researchers were able to link to the site was named Lam. When the estate was used as a Texas Asylum for the Blind in the 1850s, the institute leased Lam, who was about 10 or 12 years old, to his slaver, who received compensation. Lam taught visually impaired students how to weave baskets.

“He did not have access to his body [and] certainly not the money his slaver got,” Dudley said. “But he was teaching a skill to these visually impaired youngsters…so they could have financial independence in their own lives, something he wasn’t. allowed to have even in his endeavors on this property.”

When the estate was inhabited by the Neill and Cochran families decades later, the slave quarters were used by domestic workers, Dudley said. Many of these workers were former slaves who lived just down the street in Wheatville, one of 15 freed communities established in Austin after emancipation. These workers will also be highlighted in the project.

“Being able to find these stories and repopulate this site with some of these people and their voices,” Dudley said, “is a hugely important part of this project and a practice that I think is helpful in engaging more closely with the story of Austin.

Dasch says she thinks part of the reason this building has been misinterpreted for so long is that there aren’t many remnants of urban slavery left in Texas to compare it to. Most people associate slavery in Texas with the plantations, where small buildings or cabins away from the main house were typically used as slave dwellings. But in cities, slave quarters were often closer and aesthetically similar to the main house.

“As far as Texans talk about slavery in the antebellum period…it was about plantation slavery,” Dasch said. “So the fact that this building still exists opens a door to understanding urban slavery in Austin that the city really never acknowledged.”

The researchers say a major theme of this project will highlight the contributions of enslaved peoples in Austin.

“The focus here is on honoring skills, honoring work, honoring people and their lives, soul worth and all the things that are related to our site,” he said. Dash said. “And how those people who were human beings, regardless of what agency they were authorized or not, helped make Austin what it is today.”

Environmental conservation in Nepal is suffering from an investment crisis. Now everyone is responsible for corrections