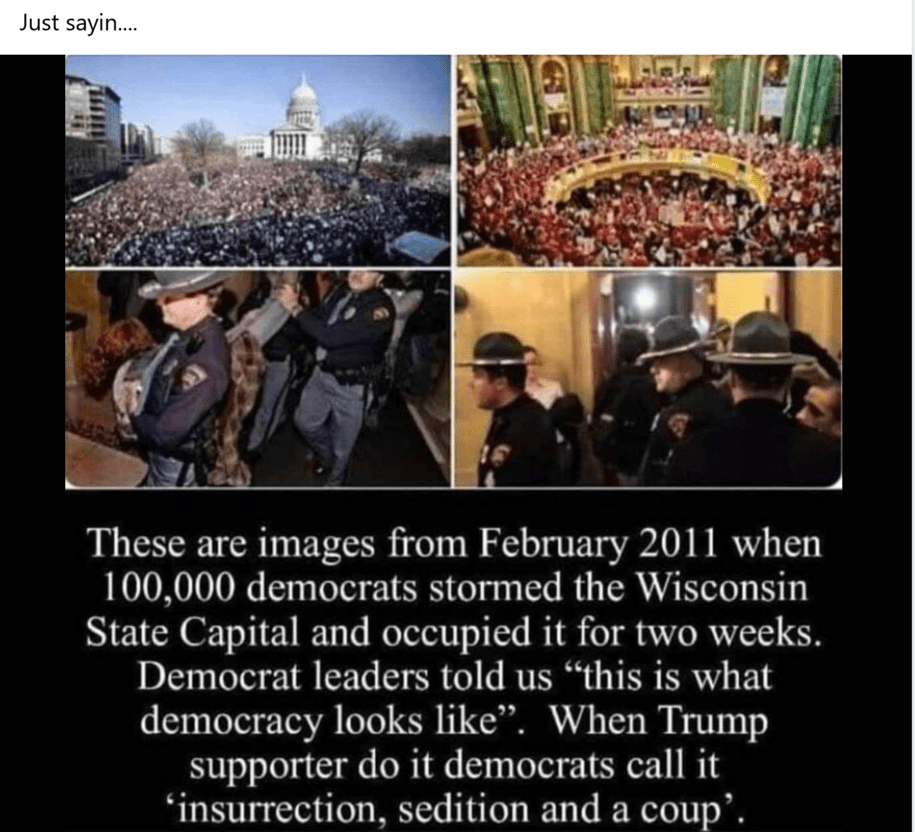 I WAS CURIOUS about a Repub running in the primary for a county office in my locality, and went to the campaign’s FB page and found the above posted there.

SO, I searched around a bit and found this in the Milwaukee Journal Sentinel dated January 8, 2021:

Some Republicans in Wisconsin have compared Wednesday’s rampage to Washington, DC – when a mob of President Donald Trump supporters stormed the US Capitol, chasing House and Senate lawmakers as they smashed windows , ransacked offices and clashed with officers — to the 2011 Bill 10 protests in Madison against the government of the day. Scott Walker’s move to end collective bargaining for most public servants in Wisconsin.

Both involved large crowds of people. Both were loud. And both happened in and around a historic building.

Walker himself compared the two on crowd size and state house occupancy.

But there were big differences between this week’s riot at the US Capitol aimed at overturning a presidential election and the protests at the State Capitol nearly a decade ago.

Here are some key differences.

Now, I certainly remember the Madison protest, and I couldn’t remember anything like the violent, destructive and deadly MAGA mob attack on the United States Capitol. But if a Repub in my locality pushes this dishonest image, I expect it to pop up elsewhere.

AND I FOUND some other great links to put on this campaign FB page, and I’ll share them here.

Wisconsin state law allowed the capitol to remain open as long as public debate continued on a pending bill. Teaching assistants noticed that the Senate had not set a limit on the number of speakers during a floor debate on Walker’s bill, and so signed up thousands to testify. This kept the debate open indefinitely, as well as the capital itself, and eventually turned the occupation into a twenty-four hour talk, with a microphone set up in the middle of the rotunda. beautifultrouble.org/…

Protesters had by all accounts policed ​​themselves, including creating cleanup details and other organizing efforts. They used blue painter’s tape to hang their signs – at the request of state officials. Some protesters said the state actually provided the tape to prevent lasting damage.

A day before the jaw-dropping damage estimate was released, a Madison historic preservation expert published a blog post praising the protesters’ conduct.

He called the protesters “evangelists in their respect for the building”. www.politifact.com/…

And then there is the long wikipedia article:

On February 25, following rumors that the Capitol building would be closed and protesters moved out, the head of the state’s largest police union released a statement urging Governor Walker to keep the Capitol open. Jim Palmer, executive director of the Wisconsin Professional Police Association, went on to say that his organization was on the side of the demonstrators, despite the fact that law enforcement officers were exempt from the collective bargaining changes of the Budget Reparations Bill. Palmer then called off duty officers to sleep at the Capitol that evening. Later that day, the Department of Administration announced that the Capitol building would remain open. en.wikipedia.org/…

So if you come across this fake equivalency meme or other nonsense on FB or wherever you roam, there’s ammo for your ammo box.