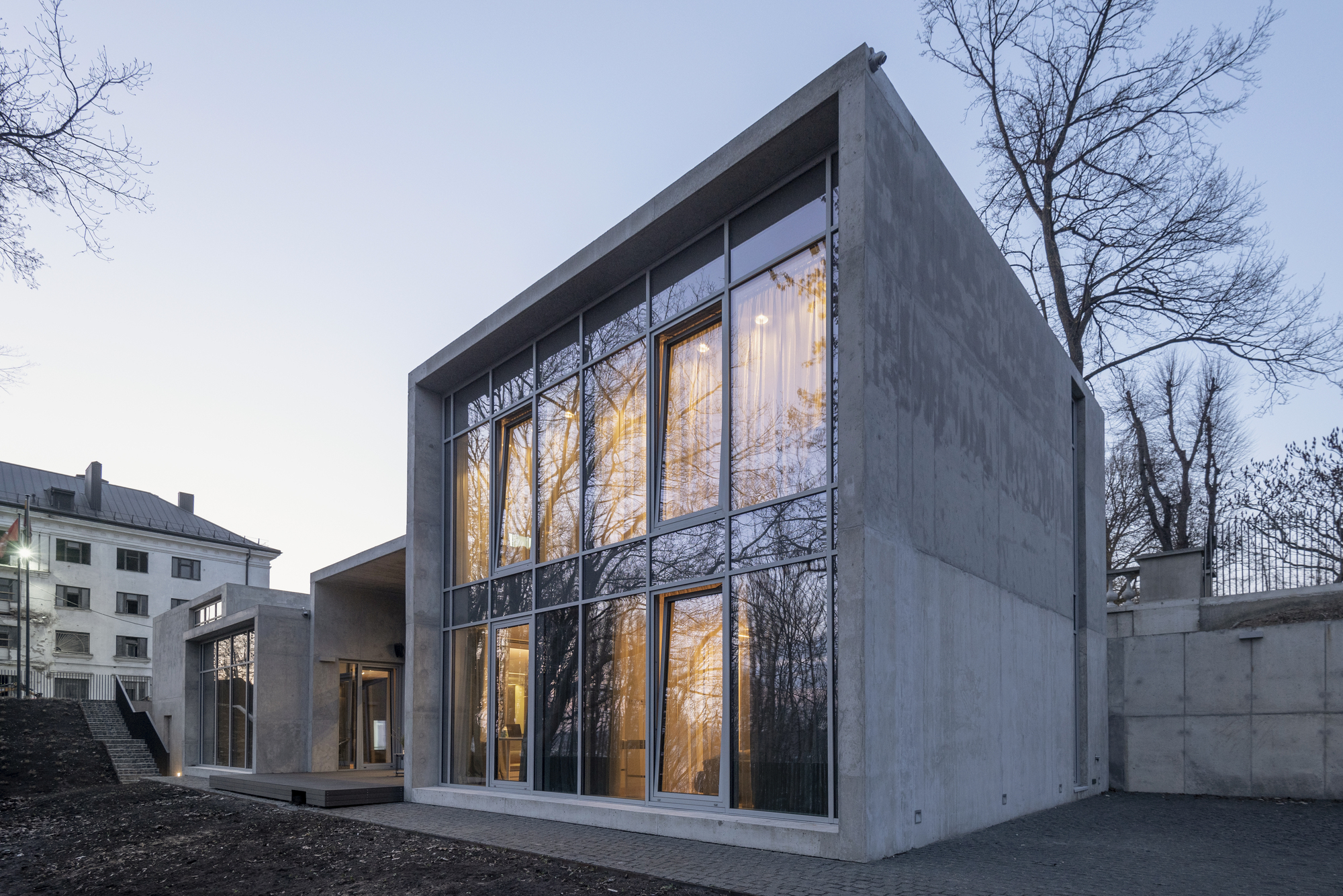 Text description provided by the architects. The expressive building, designed from interconnected separate modules, is located on the picturesque slope of the historical site of Zaliakalnis, which offers a panoramic view of the city center. The land is surrounded on two sides by trees growing on the slope, here – the Kaukas stairs to the city center. The Art Gymnasium, located in the villa of the former prime minister of independent Lithuania in the interwar period, Juozas Tubelis, is nearby.

Very dense urban architectural situation. Strong natural influence, because the plot is sloping, at the very top of it, which offers a panoramic view of the city. This thickness is due not only to the natural and cultural aspect, but also to the emotional aspect, because once the villa was designed as a finished composition, the side house and another house did not need be here. Over time, the situation changed, a separate plot was formed, and the architects were instructed to create a different approach – respecting this environment, creating a modern building without imitating that it is part of this villa, but by creating a new building without obscuring the historic ones. .

It is not only a historical place, but also changing, because in autumn the curtain of leaves captures the panorama and then one has the impression of living in the woods. Assessing the extremely dynamic profile of the land, the architects sought to design a structure that would flow organically into the plot, built from small modular elements, as if these individual elements were sprinkled across the slope. The walls of the building were doubled and thinned so that it seemed that each volume of the building was a separate element placed next to it. A single volume is constructed of four distinct volumes, inside which the spaces overlap, interlock and become dynamic.

The emotional aspect of the complex architectural situation is compounded by the fact that it is difficult for people to descend the house as it is associated with basements, cold and discomfort. In this case, we have a situation where we see the roof of our own house and all life continues as a terrace below. It is a house with a low floor, a house with an underground wall and a house with concrete walls. These are really great psychological challenges. It is a house that has no land. There is only a narrow section, but the area of ​​this plot is not lacking, everything is here.

In order not to falsify history, the dwelling house was designed in a contrasting way – to make it clear that it is a building of that time. Thus, the building of exceptional architecture welcomes with the concrete facade, expressing its natural beauty, whose raw industrial texture is softened by the glass, contrasting with its lightness and fragility.

And the concrete, although a natural and neutral material, contrasts sharply with the nearby interwar architecture, such as the stuccoed and colorful villa of Juozas Tubelis. It’s a very electrified place, both naturally and culturally, so our team of architects were tasked with designing a house that would set the mood for the house to have a certain spirit of its own, to appear as if it were a fifth dimension. The challenge was to lower the house down to the low deck to make sure it didn’t feel like there was dirt behind you. Aim to create a sense of comfort and security while being at home and have the whole view of the city – nature, relief, city, center before your eyes.

The idea of ​​the volume of the building was also programmed in the scenario of the interior space of the house. These different levels, this dynamic is repeated both outside and inside the house. We see the exterior volumes move from the exterior to the interior. It’s as if we fell into a certain hierarchy of premises: there is a low space, then a high vertical, this space changes, it goes up, it goes down, it compresses. The way the building was designed enabled its creation. Open this view, which is very important here.