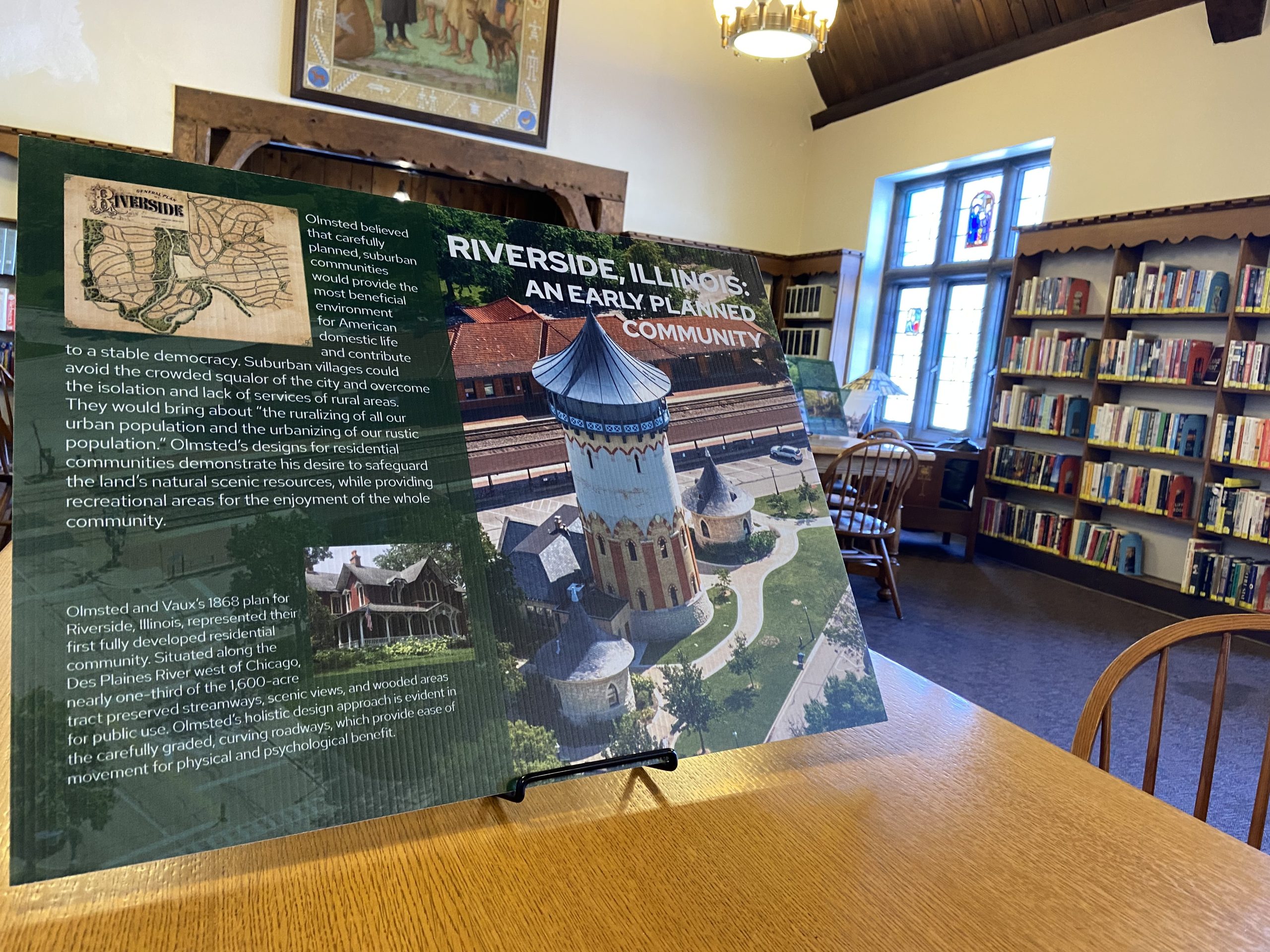 Frederick Law Olmsted’s 200th birthday will be celebrated this spring, and the celebration at Riverside has already started in the form of a new 23-panel exhibit on the philosophy and career of the famous landscape architect now on display in the Great Library Room. Riverside Public, 1 Burling Road.

Entitled “Frederick Law Olmsted: Landscapes for the Public Good,” the exhibit is the result of a collaboration between the National Association for Olmsted Parks and the Oak Spring Garden Foundation, a Virginia-based nonprofit organization.

While the panels are available for viewing online, the organizations have also provided a means for other groups, such as the Riverside Historical Commission, to download high-resolution images of the panels and reproduce them for display.

Connie Guardi, a longtime member of the Riverside Historical Commission, said the group jumped at the chance to replicate the exhibit in Olmsted’s first planned community.

“We felt it was really important for our community to be such an important part of Olmsted’s career,” said Guardi.

Although there was no cost to download the exhibit, the commission spent funds to manufacture the panels. The commission decided to draw these funds from the Bill Sherman Memorial Fund, which was established following the death in 2019 of the longtime Riverside firefighter and deputy chief who was the historian of the fire department.

The 18×24-inch panels that make up the exhibit are on display just inside the entrance to the Riverside Public Library on shelves and tables in the Great Hall, where they will remain until April. Each panel includes a photo and text chronicling Olmsted’s career, from the Gentleman Farmer of his estate in Staten Island, New York, to his years working with Calvert Vaux on their historic design for Central Park in New York City, Prospect Park in Brooklyn, his work as Secretary General of the United States Civil War Sanitary Commission, his efforts to protect the Yosemite Valley and the Redwoods of Mariposa Big Tree Pine Grove, his groundbreaking design work in Riverside and Moreover.

“Riverside is the only community included in the exhibit,” Guardi said.

The commission had planned to hold an opening reception for the exhibition, but canceled it due to the recent resumption of COVID-19 cases. According to Guardi, the entire exhibit will be moved outside in April to an area near the library, where it will be in place for the official celebration of Olmsted’s 200th anniversary on April 26. The commission plans to have a birthday party for Olmsted at Riverside Station, 90 Bloomingbank Road, from 4 p.m. to 6 p.m. that day.

The exhibit panels will remain on display outdoors all summer and into fall, Guardi said, before finding a permanent home on display rotating inside the east shaft of the Riverside History Museum in the park. Centennial.