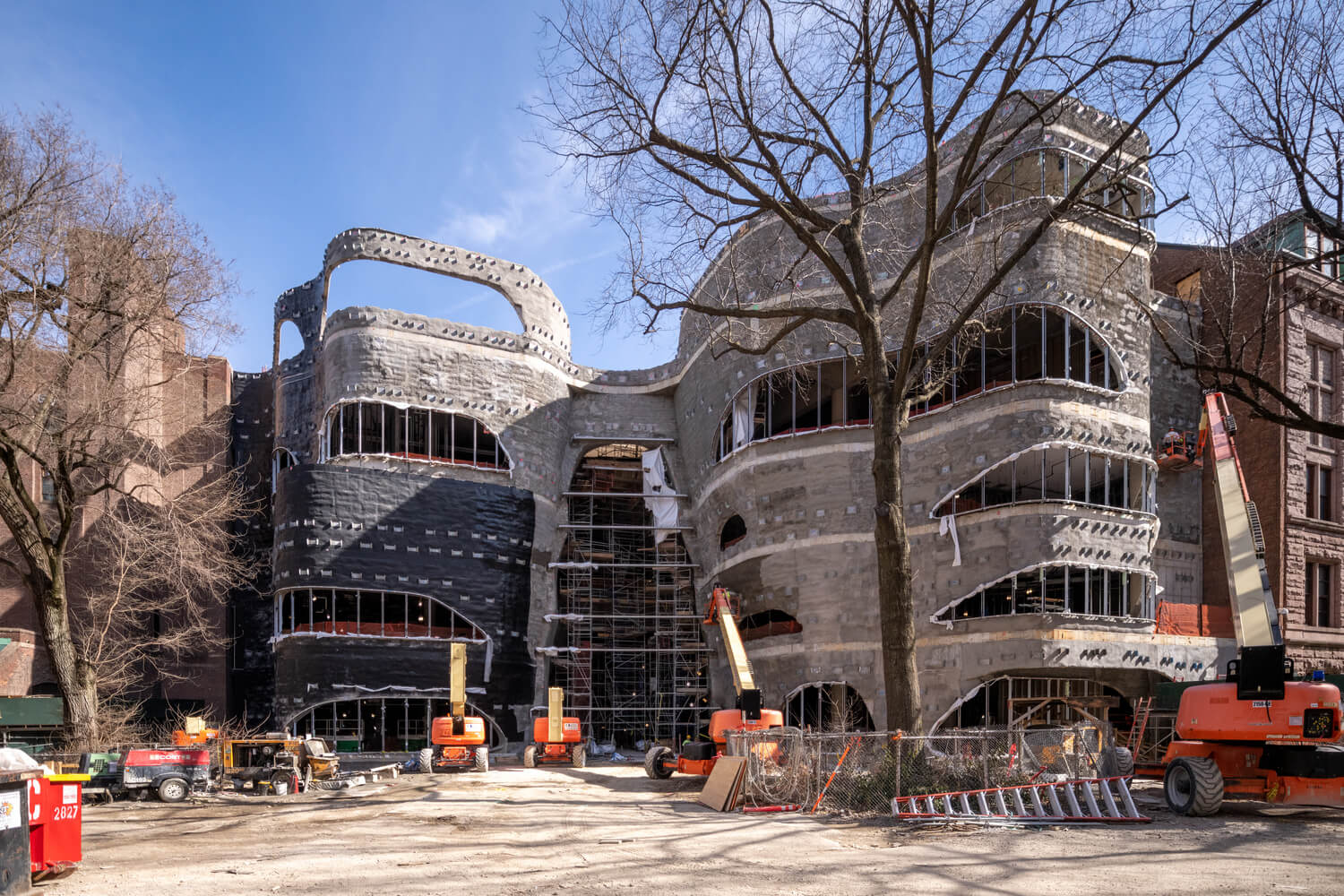 The American Museum of Natural History (AMNH) opened in 1877 on a barren expanse just across Manhattan’s Central Park and has since grown into a campus of 15 buildings of varying typologies and styles. The latest entrance, designed by Studio Gang with Davis Brody Bond, stands out for its integration, thanks to an eye-catching yet reverential Milford pink granite facade on a corrugated shotcrete base. The variety of stone matches that of the exterior of the main wing.

The Gilder Center for Science, Education and Innovation is intended to strengthen the museum’s science and research programs while improving circulation between its many wings. But on the Upper West Side, where historic preservation has an activist side, aesthetics can not be ignored. According to Weston Walker, partner and design director at Studio Gang, the design team embraced the ever-changing nature of the AMNH to win over the Landmarks Preservation Commission, which reviewed the project.

“One of the things that became clear in the review process is that the museum is not architecturally or historically set in stone,” Walker said. A, “but rather an evolving collection of interconnected buildings constructed and modified over time, a sort of microcosm of the evolution of New York’s architectural heritage.”

Located along the west perimeter of the campus, the proposed 230,000 square foot based on a robust concrete foundation anchored once the powerhouse Dynamo museum. The reuse of the existing foundation has saved time and money, but with a budget of 431 million dollars, it does not seem to be a major concern. Shoring and scaffolding were applied as necessary to stabilize the adjacent structures.

The design of Studio Gang included a windswept outcrop with a four-story atrium crossed by stone bridges. For the plastic shape of the building, architects have chosen to use concrete structural projected, which (as the name implies) is to project the high-speed concrete on an internal rebar support. Compared to the pre-planned method of pouring concrete, the process of “shooting” shotcrete seem almost improvised, involving a range of tools such as rods and trowels. Almost. In Gilder Center, the thickness of the shotcrete from 4 to 24 inches to fit complex geometries. The exact calculations were made by the engineer Arup structure.

Walker explained that “much of the curvature in the shape of the building enhances the arching action of the structure – these curves help move gravity loads from horizontal to vertical. It is a centuries-old structural geometry that we were able to interpret with a contemporary material application. Studio Gang erected several models to “better understand the kind of shapes and surface qualities we could achieve, and to learn more about the shotcrete application process from the skilled craftsmen so that we could properly design the building. as part of this unique process.”

The installation of the facade should begin in a few weeks. The pink granite blocks seen in the renderings will first be cut and assembled into “mega panels,” a technique that will speed transportation and installation. (Hofmann Facades and Island Exterior Fabricators, acting in coordination with Buro Happold facade engineers, will oversee the process.) The oversized panels, with their varying widths and runs, have a grain reminiscent of a geological stratum, as does the stone masonry altered. adjacent structures.

Semi-circular windows cut into the granite-clad facade maintain a minimal window-to-wall ratio, a key part of the project’s strategy to achieve LEED Gold certification. The glazed wall above the entrance is shaded by a knot building, while a large skylight will illuminate the building’s atrium and its many adjoining bridges and hallways.

The Gilder Center is slated to open this winter and, according to Jeanne Gang, founder and partner of Studio Gang, “the architecture aims to spark the spirit of discovery and offer an invitation to explore.” A fitting aspiration for this age-old institution.

A whimsical French Quarter patio is full of creative features; see it on the Patio Planters tour May 28 | Entertainment/Life