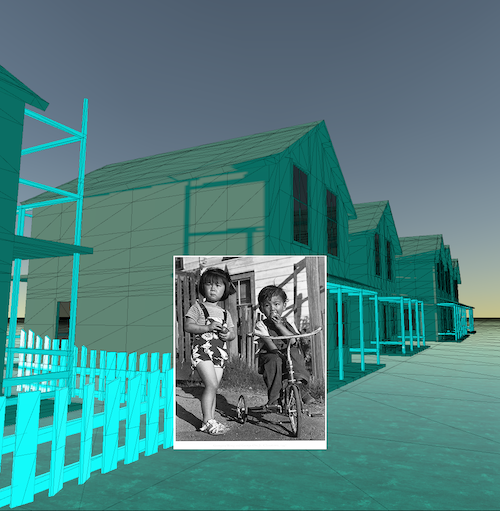 Susana Ruiz, an assistant professor of film and digital media at UC Santa Cruz, along with Emmy-nominated cinematographer and multimedia artist Huy Truong, were selected as one of ten winners of this award. year. Hewlett 50 Art Commissions in media arts. The prestigious William and Flora Hewlett Foundation Fellowship will fund the creation of a new media work related to the history of Chinatowns in Santa Cruz. The piece, presented by Santa Cruz Museum of Art and History (MAH) and also supported by the Institute for artistic research at UCSC, will debut in 2024.

“The Last Chinatown” (working title) is an interactive, augmented reality public commemorative film. Through the prism of historical erasure, the work speaks of the rich narrative landscape of Santa Cruz with a focus on its last Chinatown. It is a performative interpretation of an original story by author and UCSC Professor Emeritus of Literature, Karen Tei Yamashita, supported by insights from community members and historical records. The final work will incorporate theater and gameplay and be experienced on mobile devices, including augmented reality glasses, at historically significant sites in downtown Santa Cruz to make life, heritage and work visible. of those who lived there.

Santa Cruz had four distinct Chinatowns in the late 19th and early 20th centuries. Chinese immigrants, who played a fundamental role in building California’s infrastructure and developing its economy, were confined to the confines of these Chinatowns, where they often shared space with other individuals marginalized by the white supremacist infrastructure. These were precarious sites subject to repeated floods and fires. Santa Cruz’s last Chinatown, located in present-day downtown just two blocks from the MAH, was washed away by the overflow of the San Lorenzo River on Christmas night 1955.

Ruiz and Truong, who have long been interested in the erased histories of Santa Cruz’s BIPOC communities, were unaware of the existence of the city’s Chinatowns until they attended a 2018 performance by a dancer, choreographer and professor of performance, acting and design at UCSC. Cynthia Ling Lee in which she played characters spanning a century of Chinese presence in the region.

Ruiz and Truong were shocked. “How could there be no remnants of these neighborhoods in this progressive community?” said Ruiz. “They were completely invisible. But our archival research has made us very intrigued by these communities. These Chinatowns were a place for many BIPOC people.

The duo’s search led them to a number of story makers and leaders in the Santa Cruz AAPI community, including George Ow Jr., an elder and one of the last residents with memories of life in the last Chinatown. Ow’s Living Stories offered tantalizing opportunities to use AR technology to physically place people in the past.

“George’s grandmother had a big garden by the river,” says Truong. “Participants will be able to stand next to the river at this location – with the sound of water, the smell of plants and the wind on their skin – and experience its story through augmented reality and volumetric cinema in the real space. It’s so immersive and captivating.

“We’re both media artists,” Ruiz adds. “We are intrigued by technologies that allow us to tell stories in new ways. Most of the ways we experience stories don’t ask us to think about our bodies in space. Physicality is such a strong component of the job. We are thrilled to work with Karen Tei Yamashita to bring the story, embodiment and space to life.

Ruiz and Truong, who is also a former lecturer in film and digital media at UCSC, have long been artistic partners. They are the founding partners, along with documentary filmmaker Ashley York, of the award-winning film Action games (TAG), an artist studio with a portfolio spanning games, art, justice activism and storytelling. Their work has garnered multiple accolades. TAG’s game “Darfur is Dying” won the studio the prestigious Governor’s Award (Emmy’s highest honor) at the Academy of Television Arts and Sciences Emmys in 2006 as a central part of the MTV’s transmedia campaign in Sudan and was presented to members of the US Congress. at the United States Capitol during the online National Town Hall on Darfur. “RePlay: In Search of Zoé/RePlay: Where is Zoé?” received the 2009 Adobe MAX Award for Social Responsibility and was included in a United Nations report titled “The Global Assessment of Women’s Safety” as an example of an innovative partnership between a social justice organization and a software developer. media.

Unlike those world-focused projects, “The Last Chinatown” is, for Ruiz and Truong, an opportunity to delve into something close to home. “As an Asian American, Chinatown holds a special place for many of us growing up,” says Truong, who lived for many years in New York’s Chinatown. “It’s a space for people of color…where you can feel good about yourself.”

“The Last Chinatown” is slated for a public premiere in the spring of 2024, with a preview of the work to be presented at the MAH’s “Frequency” digital arts festival from September 21-24, 2023.

The dog problem continues, an emergency management plan drawn up by Hampden breeders