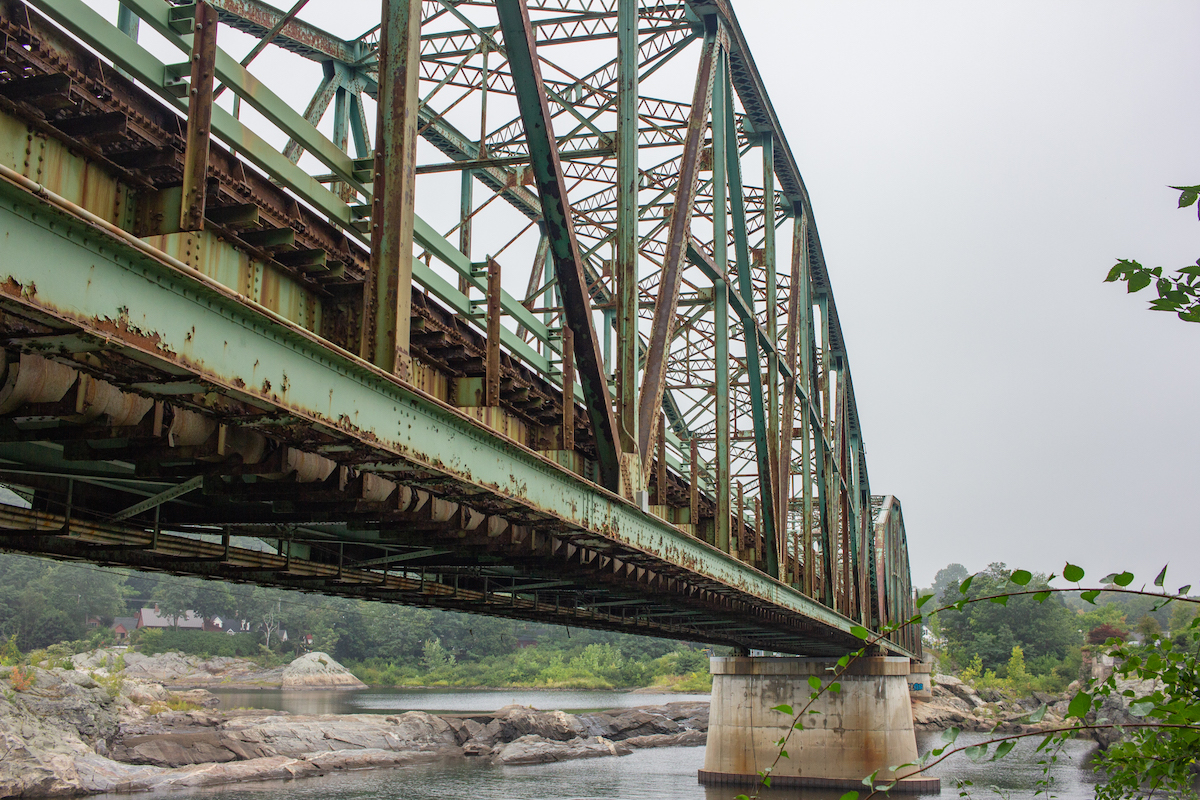 The battle for the future of Frank J. Wood Bridge heads to the First Circuit Court – The Bowdoin Orient

For 89 years, the Frank J. Wood Bridge has crossed the Androscoggin River at the north end of Maine Street in the city of Brunswick. For the past five years, the Maine Department of Transportation (MDOT) has been pushing for a plan to demolish it. MDOT and a new local activist group say building a replacement bridge would be cheaper, safer and better than rehabilitating the existing structure.

Last Monday, a small but persistent group of Brunswick and Topsham residents presented their argument that the current bridge should be preserved in a hearing before the Boston First Circuit Court of Appeals. Now, in the final stages of what has been a five-year war on the future of the “fracture-critical” structure, no one is moving – meanwhile, the dilapidated and busy bridge is not getting any younger.

Years of wear and tear have left the bridge’s paint peeling and rusting, its sidewalk supports partially eroded, and its superstructure showing significant damage. The MDOT recently classified the bridge as a “critical fracture level” which means, by its own definition, that “a [structural] failure … would cause part or all of the bridge deck to collapse. Although severe, this designation is not uncommon, as there are over 18,000 bridges classified as “critical fracture level” in the United States.

The assessment of the “critical fracture level” prompted the MDOT to begin the process of investigating plans to rehabilitate or replace the bridge in 2015. It started at the local level, with open meetings in Brunswick and Topsham. to solicit the opinion of residents. John Graham, a Topsham real estate broker, attended some of these meetings and has since served as chairman of the Friends of the Frank J. Wood Bridge (Friends of the FJWB), a group of community activists supporting rehabilitation. The group is made up of a dozen permanent members who met during these preliminary meetings, as well as more than 1,400 social media subscribers and a brigade of local owners showing their support with green signs “# SaveTheFJWB â€. Since 2016, the Friends of the FJWB have argued several times in city assemblies, in front courts and in courts – and five years after the MDOT approved the construction of a new bridge, the FJWB is still standing. In Graham’s opinion, this is a success.

The organization’s argument rests on the claim that replacing the bridge is a violation of federal law. They claim that because the bridge is eligible for historic listing in the National Register of Historic Places, it is protected under clause 4 (f) of the Department of Transportation Act 1966, which states that the MDOT cannot approve any project requiring the use of land from a designated historic site, unless there is no â€œfeasible and prudentâ€ alternative to the use of the site. Importantly, although the bridge was deemed eligible for this historic status in 2017, it has not yet been explicitly considered historic by the national organization.

â€œIf the engineers from MDOT came and said the bridge was not salvageable, I would have pushed for a replacement like thatâ€¦ from the start,â€ Graham said. â€œBut the MDOT came out and said they could rehabilitate the bridge for an equal price. The 4 (f) is not debatable. The law is clear on what is defined as historical and what is not. People’s opinions vary, but unfortunately for themâ€¦ the law says that if it’s safe and doable to do it, you have to maintain it and you have to rehabilitate it. This is the crux of our trial. MDOT had a solution, went looking for a problem, and prepared the books along the way to try and tailor their solution to their problem.

The Friends of the FJWB retained the services of Andrea C. Ferster, a leading lawyer and nationally recognized expert in historic preservation law, to advocate on their behalf. So far, hearings and amicus briefs have focused on the historic value of the bridge as well as the claim that the MDOT has, to use Graham’s phrase, â€œbake the booksâ€, c that is, it intentionally underestimated replacement costs and inflated projected costs. rehabilitation to make the construction of a new bridge more economical. Judges have ruled against the claim three times so far, but the case has progressed through the state’s district court appeals process to a hearing in the First Circuit Court of Appeals on Monday. . The results of this case will be published in the coming weeks.

“Throughout these legal proceedings, the position of the Maine Department of Transportation has not changed: the Frank J. Wood Bridge must be replaced,” MDOT Director of Communications Paul Merrill wrote in an email. in the Orient. â€œThis is a 90-year-old bridge, at risk of fracture, which is in poor condition and deteriorating. We plan to go out to tender for the construction contract later this year. Merrill later wrote that he expects construction of a bridge to begin early next year, with an expected completion date “in the second half of 2025”.

The Friends of the FJWB campaign has also faced its fair share of resistance at the local level. This summer, two of the group’s signs on the Brunswick side of the bridge were vandalized and destroyed. The boards of Topsham and Brunswick Select voted overwhelmingly in favor of the replacement, convinced by what Graham called a “propaganda campaign” led by the MDOT. And, more recently, a rival neighboring organization, Bridge to the Future, organized local residents in support of the bridge replacement.

Larissa Darcy, resident of Brunswick and Vice President of Commercial Lending at Norway Savings Bank, launched Bridge to the Future last June. Darcy volunteered to serve on the original design advisory committee set up by MDOT five years ago, where she learned what she saw as the important benefits of bridge replacement and gained insider insight into the designs of the potential replacement.

â€œThe design has been presented, the decision has been made, but [construction] still hasn’t happened, â€Darcy said. â€œWe want people to know everything that comes with the new bridge and to know that we are supporting it. We felt that the majority of people supported the new bridge, but their voices were not heard. There is a small group that is in opposition, but we are basically sending the message of the majority …[that they] support the new bridge.

While Graham’s case hinges on the legal question of replacing a historic site, Darcy is more concerned with sharing the supposed benefits of the new designs, as well as pointing out the safety concerns at hand.

â€œSafety is the most important thing, and the weather doesn’t help at all. We could have had a new bridge right now if this construction had started when it was approved – this bridge has not been rejuvenated in the past six years, â€said Darcy.

As Darcy argues, replacing the bridge is not only essential from a safety standpoint, but the new design would also bring a host of other benefits to the community. Mockups of the design feature dedicated bike paths on both sides of the bridge, protected sidewalks with viewing areas on the Bowdoin Dam and Mill and a restoration of Anniversary Park on the Brunswick side of the river as well as a new park. audience on the Topsham side.

â€œWe found that a lot of people hadn’t even seen the design of the new bridge. People had no idea [its benefits]”said Darcy.” We have a historic element as part of the new bridge that commemorates not only the Frank J. Wood Bridge, but the bridges before it … as well. This has really been our message and our focus since the We let the experts make the decision, the decision has been made, and now we just let the public know about the benefits. “

Richard Mersereau ’69 is one such audience member. A Bowdoin alumnus and longtime administrator of the College until his retirement in 2015, Mersereau lives in Brunswick and is one of 935 local residents who have expressed support for the replacement by liking Darcy’s Facebook page.

â€œFrom day one I thought that in this case new is better,â€ said Mersereau. “[Itâ€™s] safer, wider, more beautifulâ€¦ so I think it’s a victory at all levels. We have a deteriorating bridge that needs to be replaced somehow, and the opposition has dragged it out for as long as possible.

â€œThe new bridge group that formed last month asks me why? Graham said. â€œWe’ve been working on this for six years, so why would you want to start something now? This is not a popularity contest. There are federal laws for a reason. If you want to change federal laws, you can try to change federal laws. Even though everyone voted that we don’t like the historic building, that doesn’t mean the building is still not protected by law. It’s not a popularity contest, so why are they spending money on advertising? “

Bridge to the Future has played no role in the ongoing litigation, which only pits the Friends of the FJWB against the MDOT. Monday’s hearing focused on MDOT’s financial assessments of the planned replacement plan.

In 2019, the MDOT estimated the cost of rehabilitation at $ 15 million with a total lifetime cost of $ 35.2 million over 75 years. Conversely, he estimated the replacement cost at $ 13 million with a total useful life cost of $ 17.3 million over 100 years. Lawyer Furster argued that the accounting had been manipulated in such a way that in reality the price difference between the two would be significantly less and rehabilitation might even be a cheaper option. The court will make the final decision on whether she is right in the coming weeks.

Furster may be right: since the 2019 EA estimated initial replacement costs at $ 17.3 million, the MDOT has increased that value to $ 21.8 million. According to Merrill, the MDOT estimates the cost to repaint the rehabilitated bridge would be $ 12 million for three new paint jobs over 75 years, while the replacement paint would cost just $ 3.5 million for two new ones. painting work over 100 years. Graham and others claim that these projected plans would not meet the proper maintenance standards for a potential replacement bridge and are unnecessarily thorough (and costly) for the potential rehabilitated bridge. As he claims, if MDOT were honest about their bookkeeping, rehabilitation would turn out to be a much more cost-conscious choice.

â€œWe have a bridge,â€ Graham said. â€œFor a fraction of the cost, we can bring it into the 21st century and continue to make it the icon that it is. [Pictures of] this bridge are everywhere from Bowdoin [admissions magazines] at the phone bookâ€¦ you see the bridge and two windmills, and you know exactly where you are in the world. Place matters. We can make this bridge shine again, and there is no reason to throw it away. “

Rebecca Norden-Bright contributed to this report.