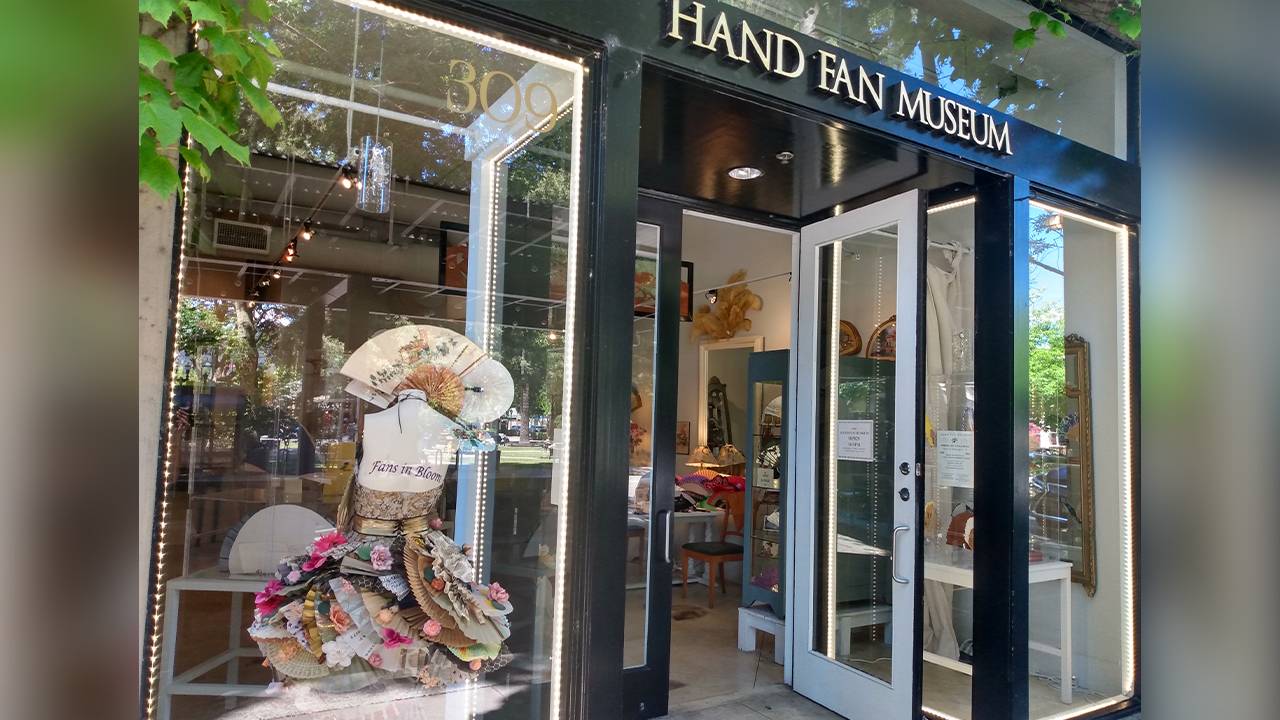 Pam Sher, 83, is a fan of, well, fans. She’s amassed about 2,000 fans over the past 50 years, and her passion has driven her to open North America’s only dedicated fan museum, the Hand Fan Museum in Healdsburg, California, in the county’s wine country. of Sonoma, 70 miles north of San Francisco.

Captivated by the craftsmanship behind the mini artworks, she is also enchanted by the history of fans, which have been used for thousands of years from ancient Egypt, Greece and Asia for practical use. – to refresh yourself on a hot day – as well as for fashion, religion and ceremony.

“There is no country on this earth, except Antarctica, which has had no fans, from Europe, Asia, Micronesia and Africa until the Arctic.”

Usually made of ivory, tortoiseshell, mother-of-pearl, wood or bone at the base, more paper or silk at the top, some have unusual shapes. A Chinese fan that Sher owns is shaped like a fish when folded. A century-old fan is shaped like a bat. It presents between 30 and 60 fans from its collection during thematic exhibitions.

“Fans are art and beauty,” says Sher. “There is no country on this earth except Antarctica, which has had no fans, Europe, Asia, Micronesia and Africa at the ‘Arctic.”

Fans merge her passions for art and history, adds Sher, who taught both subjects at Lowell High School, a public school in San Francisco. She says the 18th and 19th centuries were the golden age of fans in the Western world, where it was an accessory for fashionable women.

“One thing that impressed me was the variety of the museum and the ability to do changing exhibits on themes, like one about love around Valentine’s Day,” said Kathryn Hanna, president of the Fan Association of North America, noting that Sher, its ex-archivist for 20 years, gave a Zoom presentation to members based on this exhibit.

The museum’s Spring 2022 theme was flowers, so a burgundy-colored satin fan with hand-painted tulips and a gold base (France, 1890-1900), and a leather fan with embroidered blue and white flowers hand, a butterfly and wheat, circa 1900, were on display. Sher commissioned an artist to do a show-stopping of a showcase, a cocktail dress made up of fans.

The display of fans is important because, although some museums have fans, such as the Boston Museum of Fine Arts, the Ringling Museum of Art in Sarasota, Florida, and the de Young Museum in San Francisco, “99.9% fans are stored,” says Hanna. , a resident of Greater Minneapolis whose collection of more than 400 fans is comprised primarily of 20th-century and contemporary styles.

A leap forward in fan technology

The folding fan was invented in 7th century Japan, notes Hanna, who wrote “Fans and Fashion,” an article in the Journal of Antiques and Collectibles.. Fans were flat before that. But flat fans also later served as firewalls to shield faces (and wax-based cosmetics) from the heat of a crackling fire, and as advertising mediums.

Advertising fans promoting local businesses became popular in the late 19th and early 20th centuries in Europe and the United States At her home in Marin County, Sher shows me a flat advertising fan depicting a pretty woman with wavy black hair who promotes the Cotton Club in Harlem. Women in frilly outfits dance the cancan, a black musician plays, and a waiter holds a dead rat by the tail of a fan of Rat Mort (“the dead rat”), a famous Paris nightclub frequented by artists and writers. A woman with a box of chocolates promotes a grocery store in Indiana, a bride in a flowered veil, a wedding boutique.

In the museum, a spectacular group of fans in sculpted gilt frames under glass line one wall. Gold leaf designs and a pastoral scene of aristocrats adorn a French fan, circa 1740. Fish, shellfish, and fisherman holding a net, bag, and fish, and dolphin-shaped guards, adorn a fan from 1735, probably Italian.

Sher also has Chinese “100 face” fans (sometimes called “1,000 face” fans), which are lacquer fans designed for export to Europe in the mid-19th century when Chinese in furniture, porcelain and art gained favor. The fans feature a figurative design in black, gold or red lacquer on the sticks and brightly colored depictions of Chinese in royal interiors or outdoors, whose faces were inlaid with ivory, illustrating stories, historical scenes and events on the sheet.

Sher’s fan obsession began when she was an adult and spotted a fan ad for a Viennese glove maker who flaunted a cute pug face in an antique store in the United States. Since her pets were often pugs, she was seduced.

On frequent trips with her late husband, she scoured antique shops, estate sales and markets in search of more. Being small and easy to pack, the fans were the perfect keepsake. “I found it took me to parts of towns I wouldn’t normally go to,” Sher says. “It opened the doors to a whole new world.”

In a travel magazine while on a trip, Sher heard about a fan museum in London. She met “so many nice, interesting and welcoming people”, who urged her to gather fans. At the time, she was raising three children and volunteering. But she looked into it and found an avid fan club in Northern California, the East Bay Fan Guild, to find out more.

Sher, who has created fans as wedding gifts for her family, also involves the community in her hobby. In an imaginative use of fans as a teaching aid, she brought a Navajo feather fan, a “moral compass” fan used by young girls in colonial times, and feather bags to fourth graders at local schools. Told that each color signified a certain trait, such as loyalty or responsibility, children were asked to make a fan after choosing five feathers, representing traits they already had or aspired to.

“I see fans as a sneaky way to introduce a bit of history.”

“I think of fans as a sneaky way to introduce a bit of history. History is probably the least appealing subject for young people,” Sher says.

This spring, a competition invited children aged 6 to 11 to pick up a blank fan in its museum and design their own nature-themed fans. The prize: a certificate for a free book at the local bookstore. In a previous children’s contest, the winner won a certificate for a treat from the ice cream shop next to the museum.

Sher’s museum is inside the Healdsburg Hotel, a low-rise pavilion on a plaza her husband developed that also includes Chef Charlie Palmer’s restaurant, Dry Creek Kitchen.

His advice to people with hobbies: “Have fun! Let others know what you’re up to. A new world can unfold, like the fans did for me.”

Sharon McDonnel is a San Francisco-based travel and food writer who has watched whales in the Azores, ridden a camel in Morocco, seen the Northern Lights in Alaska, and taken cooking classes from India to Thailand. Read more