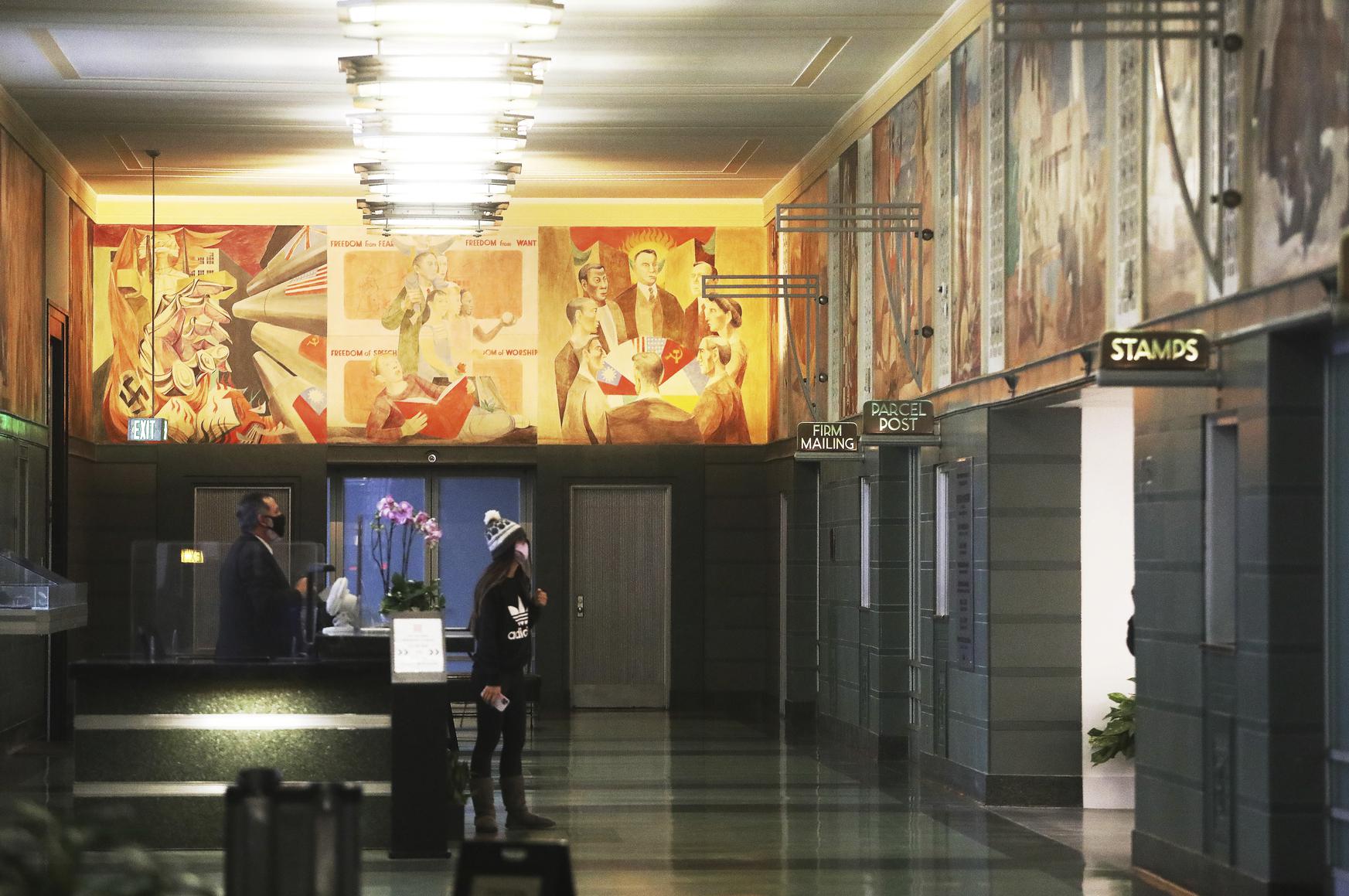 As multiple crises pile up on top of each other in the young 21st century, a tripartite mural in a former San Francisco post hall berates us with its outdated optimism.

“War and Peace,” by artist Anton Refregier, recalls what could have been if the United States – and the world – had learned enough from two catastrophic wars and the rise of fascism between them to have chosen a different path. . When Refregier painted it 75 years ago at one end of the Rincon Annex Post Office building in downtown San Francisco, the mural expressed the then widespread hope of a future that will not did not happen.

In 1940, Refregier, a resident of Woodstock, NY, won a prestigious juryed competition to paint 27 murals for the lobby of the San Francisco Post Office sponsored by the Treasury Section of Fine Arts, a New Deal initiative to beautify federal buildings with work from leading American artists. It was also one of his most provocative commissions, as what Refregier envisioned would represent the complete and messy history of San Francisco, including its racial and class divisions – subjects rarely, if ever, seen on the walls. post offices.

World War II postponed the project, and in 1943 Congress terminated the Treasury Section and transferred its commission to the new Public Buildings Administration.

In the spring of 1945, Fortune magazine sent Refregier to San Francisco to draw pictures for the United Nations Conference on International Organizations. The rally was designed to abort another world war, or worse.

Just two weeks before the opening of the meeting, a brain hemorrhage struck down Franklin D. Roosevelt, who had designed the United Nations. Conference delegates gathered a month later in a former grove of redwoods at Muir Woods National Monument to dedicate a plaque that named Roosevelt “the chief architect of the United Nations and apostle of lasting peace for all ages. ‘humanity’.

Roosevelt’s death and the political maneuvering that Refregier witnessed at the UN conference inspired him to create “a magnificent climax” for a cycle of frescoes showing a city largely built on conflict. final piece (a panoramic painting from the 1939 San Francisco World’s Fair) and replaced it with a triptych – a three-panel image – depicting the healing of old wounds through international cooperation and the price to pay for not not do it.

In the left panel, a huge armored hand rises from a stack of burning books, a swastika flag, and concentration camp prisoners to confront the Allied guns. In the right panel, people of all races gather around a circular table covered with the flags of many nations, the sun of a new day rising behind them.

Refregier sought to fill in the two antithetical images with a portrait of Roosevelt in the center. He was inspired by a photo of the sick president. Roosevelt’s face, the artist said, was that of a “tired, sensitive and utterly handsome” man who “lives in the hearts and minds of the people” and “therefore belongs to the history of this city.” . He will dedicate the entire cycle to the memory of the late president.

Refregier returned to San Francisco in June 1946 to paint the lobby, but soon came into conflict with unfriendly bureaucrats who ordered him to remove Roosevelt, telling him that the image of a recently deceased president was inappropriate for a building. federal. Refregier resisted for seven months, but eventually surrendered to what he saw as the forces that were already starting the Cold War.

â€œIt was necessary,â€ he said, â€œto erase the image of Roosevelt and his projects of coexistence, of peace, of hope of friendship with the Soviet Union.

The artist has replaced the face of Roosevelt with a multiracial group that looks to the United Nations for the fulfillment of the “four freedoms” the president named in his 1941 State of the Union address. freedom of expression and religion, Roosevelt had insisted that two other freedoms – of fear and of want – should become global human rights.


But the world was not to be free from fear or want. As Refregier predicted, the Cold War erased Roosevelt’s hopes for peace and economic freedom, while the McCarthy era resulted in purges against those who shared Roosevelt’s vision. Led by nationalist organizations and the press of newspaper mogul William Randolph Hearst (Hearst Corp. owns The Chronicle), efforts to censor or destroy Refregier’s murals began while he was painting them.

“I believe that a committee should conduct a thorough investigation into this type of art in government buildings with a view to securing the removal of anything which is found to be incompatible with American ideals and principles,” the representative said. Richard Nixon in 1949.

The murals have survived, but the post office has not. In the 1980s, the building was redeveloped into the Rincon Center, and the existing lobby is maintained as a public space listed on the National Register of Historic Places.

Today, just steps from where the nations of the world met to sign the Charter of the United Nations, a growing legion of the homeless, hungry and sick roam the city streets under opulent towers. They bear witness to how far San Francisco, the nation, and the world have moved away from Roosevelt’s freedom of want and fear.

At a time when collective global action is needed to tackle climate chaos, pandemics, nuclear weapons and the resurgence of fascism, few are turning to the UN today as Congress of Nations Roosevelt and Refregier hoped. . Like Roosevelt’s face, the purpose for which he was created has been erased.

Gray Brechin is a Living New Deal Project Researcher in the Geography Department at UC Berkeley and is the author of “Imperial San Francisco: Urban Power, Earthly Ruin”. This piece was written for the public square of ZÃ³calo.

Historic Estate for Sale for $ 18 Million in Macon, GA