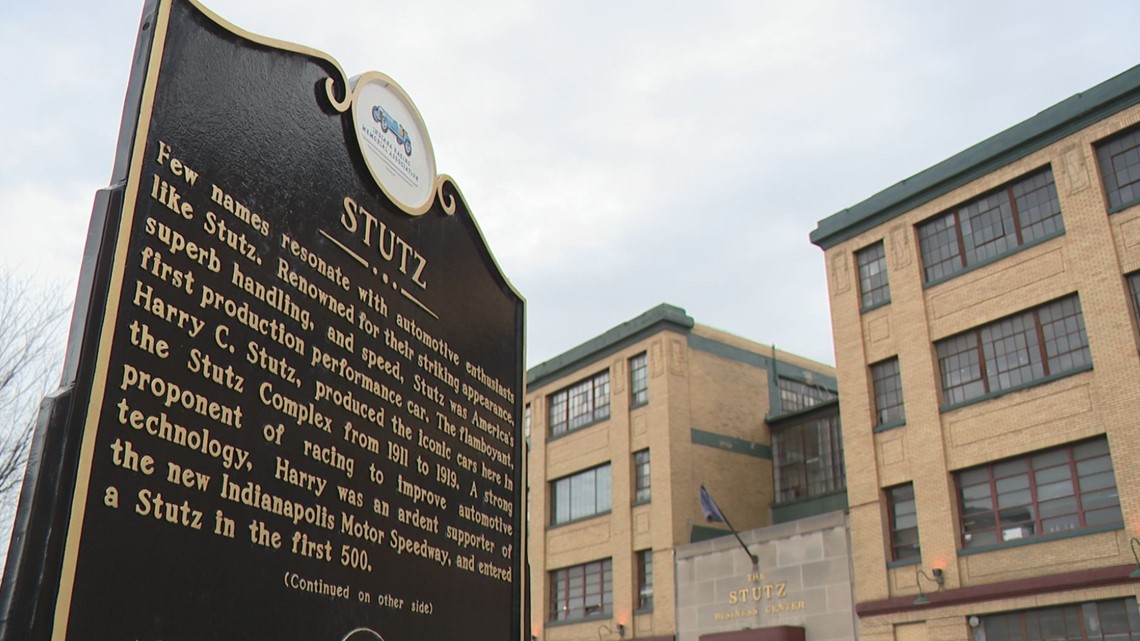 Transformation of the Stutz building will include new businesses, a museum

More than 100 years ago, Stutz automobiles were produced in a now historic building in Indianapolis.

INDIANAPOLIS — The landscape of Indianapolis has evolved in recent years as more businesses set up shop and invest in the area, developing new projects and redeveloping historic buildings.

And over the next few years, even more revitalization projects will bring big changes to downtown Indy. City leaders hope the progress made will help attract visitors and locals.

Over 100 years ago, Cars Stutz began production inside the now historic Indianapolis building. A century later, the building has changed hands several times, but work is now underway between the city and a developer to breathe new life into the iconic facility.

“The future of The Stutz will be, in many ways, like its past. The historic building will continue to house a creative and eclectic mix of offices, artist studios, creative spaces and more. SomeraRoad is pleased to work with the City of Indianapolis and the Department of Metropolitan Development to bring this mixed-use redevelopment to life. Our continued collaboration brings us closer to a reimagined landmark, and we are encouraged by the vote of confidence from favorite local businesses like Café Patachou and Amelia’s Bread,” Basel Bataineh, director of SomeraRoad said in a statement to 13News.

SomeraRoad is working to develop The Stutz into a “neighborhood” style venue, with over 400,000 square feet to work with. Inside, there will be shops, spaces for businesses and artists, and even a museum paying homage to the cars that have made Stutz an essential piece of the city’s history.

“This building has always been a haven for artists, small businesses, sort of anything local, so we still want to bring that to the table with this partnership,” said Scarlett Andrews, director of the metropolitan development department. from Indianapolis.

Once complete, Andrews said visitors to The Stutz will find new places to discover as well as familiar favorites inside.

“Some of our local businesses that are exciting and successful, like Amelia’s and Patachou, will be moving into the building very soon,” Andrews said. “So that’s already happening, construction is going on inside, some spaces are working right now.”

The Department of Metropolitan Development is investing $12.3 million in TIF funds for the project. SameraRoad said its investment was $65 million.

The Stutz is just the latest of a number of major projects underway downtown to revitalize the city. Andrews said they are working to make the city more walkable, create more housing, and give locals and tourists plenty of places to eat, drink and visit when they come downtown.

“Then you have global transformation projects like Gainbridge Fieldhouse, the Pacers transforming their field and building a brand new public plaza by Centennial Unity Plaza. And, as we announced last year, the expansion of the center convention kicks off later this year, so really a lot of momentum is happening downtown and we’re just trying to encourage more of that with those kinds of partnerships,” Andrews said.

With Hoosiers’ priorities changing in the face of the pandemic, Andrews said they believe these new developments, including plans for The Stutz, will ensure downtown Indy remains a prime location.

“We are focused on the future of our downtown,” Andrews said.

What others are reading: