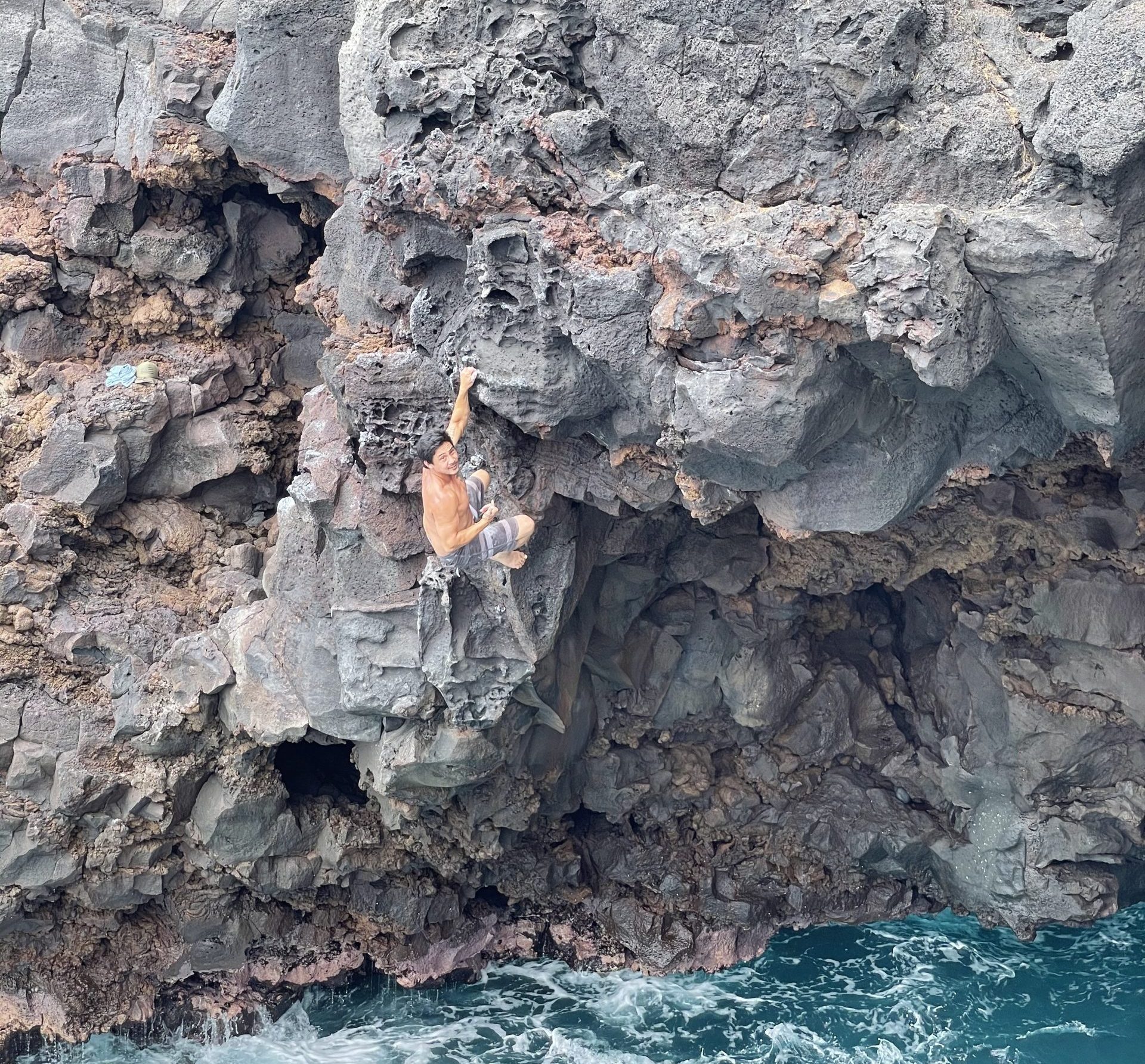 Trisha Kehaulani Watson: We need to change the way we interact with nature

Skye Razon-Olds learned to climb from her ohana. Asked about it, she remembers a childhood on the island of Hawaii and her penchant for spending time on the aina or her family’s land.

The practice of rock climbing is not as widely referenced as hula or melee, but it makes a lot of sense as an important cultural practice. Pi’i pohaku, which means to climb rocks, or pi’i kuahiwi, to climb mountains, would have been a necessary skill to master in traditional Hawaii. The caves were a place known to Hawaiians for important bodies and items.

After realizing that recreational rock climbing often ignores cultural considerations, Skye founded Kanaka Climbers, a non-profit organization that “aims to encourage a more responsible and ethical outdoor recreational community in Hawai’i.” We focus on providing vital and culture-based education around Hiking and Climbing.

This organization appears to be unique in its goal of focusing on culture-based hiking and climbing. Such a group is clearly needed, as the conflict over outdoor recreation has increased in recent years.

One site that has fallen victim to its popularity is the famous “Stairway to Heaven” hike, also known as Haiku Stairs, which is closed to the public. From neighbors having to put up with illegal hikers to town having to deal with (and pay for!) Adventurers setting up a swing and trampoline, what seemed clear was that the costs and burden of trail management were ultimately worth it. no potential benefit.

The uncontrolled bad behavior of stair walkers only underscores how many simply refuse to live by the adage: leave only footprints. And until residents and visitors commit to a drastic change in behavior that respects neighboring communities and preserves these special places, conflict will continue and more places of recreation will inevitably close.

The Hawaii Tourism Authority should take a hard look at managing visitor impacts. The Ministry of Lands and Natural Resources and counties are too often left to manage and enforce funding. Not only does this place an undue burden on these agencies, it also places an unfair financial burden on the taxpayers who cover these expenses.

This is why, at least personally, I strongly support the monetization of visitor access to natural sites. No one comes here expecting free food. Why should the consumption of our natural and cultural resources be any different? And the proceeds from this monetization can help support nonprofits, like Kanaka Climbers, who work to protect important sites and educate the community.

Climbing as a culture

I remember being on a nearby island in 2019 and seeing caves that seemed impossible to reach without modern equipment. But by spending just a day with Skye, it became clear that access to such caves was not only possible for traditional Hawaiians; it was even common.

It was certainly celebrated. Queen Emma traveled to the mountains from Kauai to Kokee in 1871. The occasion was commemorated by the people of mele; the event continues to be honored by the Hui o Laka who hold an annual hula competition in Kokee to celebrate the historic event and educate people about it.

Accessing and maintaining mountain environments was an important part of traditional Hawaiian culture. The Hawaiians understood that their highlands were an essential source of fresh water and forest resources. For these reasons, such mountain hikes were not undertaken lightly, but rather with a deep sense of respect and responsibility.

For families who participated in rock climbing traditions, rock climbing was often associated with particularly important responsibilities, such as conducting funeral practices and maintaining these burial sites.

Burials are often located in caves. These remote locations helped protect these burials from future disturbance. These places were also the responsibility of families and practitioners, a responsibility passed down from generation to generation for a long time.

It is in this sacred tradition that Native Hawaiians like Olds operate. She is certainly not the only one to have inherited tradition and practice, but she certainly finds herself struggling with a modern world that often forgets to appreciate sacred spaces and traditions.

â€œWhen I climb, I smell the ‘Äina. I smell my grandmother. I feel like my family, â€Olds said. “This is how I honor who I am and where I come from – it is a responsibility and a blessing.” Olds aims to work with agencies such as the Department of Lands and Natural Resources to ensure hikers and recreational climbers are aware of the spaces they visit and climb.

â€œSome of the most incredible sites are still present and preserved in our forests,â€ says Olds. â€œWe have to make sure we protect them for the next generation. It is just too easy to destroy these places carefully created by our kupuna. With education, these historic sites that were created hundreds of years ago will be there for hundreds of years to come.

Sign up for our FREE morning newsletter and be more informed every day.

How does the North Carolina History Museum decide what to collect?