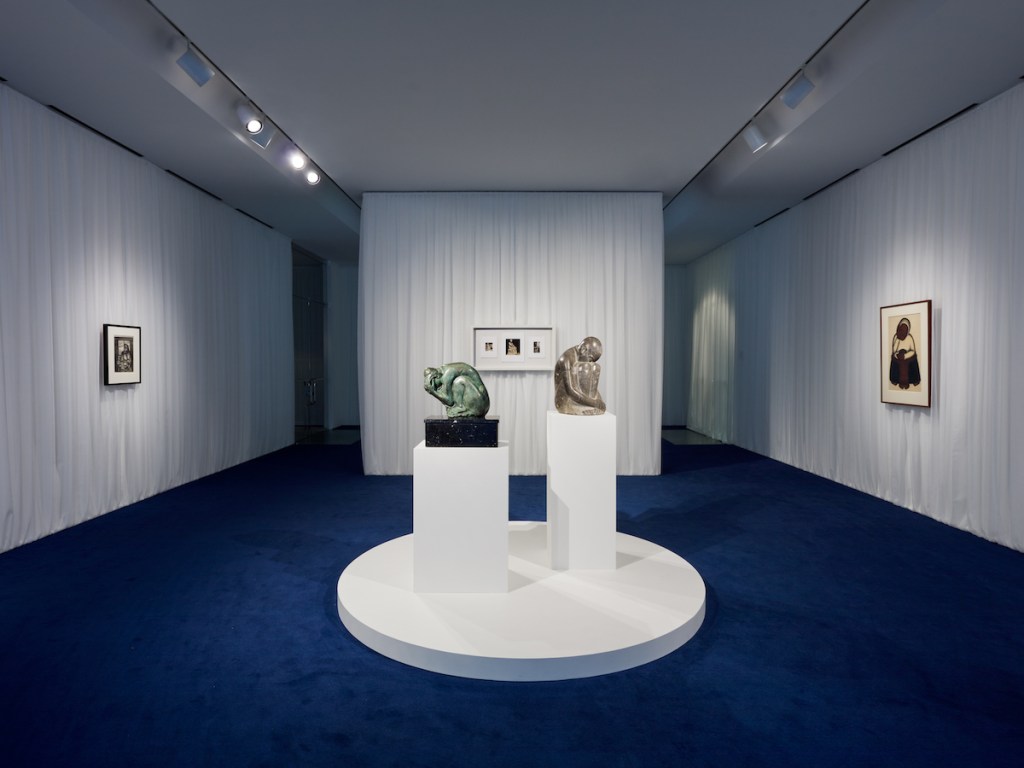 When art historian Nana Adusei-Poku visited the exhibition “Melancholy: Genius and Madness in Art” at the Neue Nationalgalerie in 2006, she was struck by the vision of sadness that the Berlin museum had to offer. She was impressed by the scale of the show, which included over 250 works, many of which had something in common with Albrecht Dürer’s famous 1514 engraving. Melancholy I, in which a sad-looking angel and a desperate putto appear lost in thought. But looking at all the art on display, she saw nothing that resembled her own experience. “Where are all the colored people?” she thought.

More than 15 years later, Adusei-Poku has curated her own exhibition in response, “Black Melancholia,” which is on view at the Hessel Museum of Art at Bard College in Annandale-on-Hudson, New York, through October 16. only a fraction of the size of “Mélancolie”, with only 38 works, its ambitions far exceed its scale.

With “Black Melancholia,” Adusei-Poku set out to redefine how museums convey trauma, grief, and alienation as experienced by the black community. That’s a bold goal, especially at a time when shows like this are becoming more common in major American institutions – think of the case of “Grief and Grievance: Art and Mourning in America,” one of latest exhibitions from curator Okwui Enwezor, who filled the entire New Museum in New York last year. But “Black Melancholia” bucks the trend by looking beyond the current moment to explain how the pangs of sadness from the past continue to ripple through the present.

In an interview, Adusei-Poku said she wanted to “talk about a condition that has basically existed since the Enlightenment. It keeps black subjects and subjectivity in a space of uncertainty, pain, grief and loss, in potentials that will certainly not be actualized.She ended up with an idiosyncratic spectacle that spans centuries, with works by a few well-known mainstream artists.

His sensibility is evident from the jump, when viewers enter an initial gallery that contains mostly 20th-century artwork. Undated painting of Rose Piper grieving heart shows a black figure whose face is cradled in his bent arm; a black woman looks sadly in the background. (The Piper piece is from Clark University in Atlanta, one of several HBCUs that have loaned out to the show.) Hope for the future, a print by Charles White from 1945, shows a black mother holding her child as she gazes out the window, toward a noose hanging from a leafless branch in the distance. Sculptures by William Artis and Selma Burke depict figures clutching their legs, communicating a mixture of mourning, anxiety and agony.

The centerpiece of this first gallery is evidence of an object that no longer exists: the ca. sculpture from 1938 Realization, which showed a man slumped against the leg of a half-naked woman. The work, like many others by Savage, was lost and the only surviving traces of it exist in the form of photographs.

The move to only include images of Savage’s sculpture, not the work itself, is the “most melancholy” of the exhibit, according to Adusei-Poku. It’s a movement that best expresses the kinds of metaphorical violence evoked in this show, which is entirely devoid of imagery that explicitly depicts police killings, the horrors of slavery and the Jim Crow era, and the deprivation of economic rights.

“This is a show about being in this space where you know that you will potentially be subjected to violence in some way, that your ancestors were subjected to violence,” said Adusei-Poku. “It’s about the sadness it evokes in you” – the “you”, of course, not being the white viewers museums typically cater to, but the black people who have been so long ignored by them.

From there, the show’s timeline oscillates between past and present. It dates back as far as the 19th century, with an 1885 nightscape showing a dark sea by Edward Mitchell Bannister, and up to the present day. There’s even a film by Rashid Johnson that shows the artist and his family as they numbly performed their daily rituals during the 2020 lockdown.

In the hands of Adusei-Poku, history seems unstable – that’s what he is about. She wanted to evoke lost lineages and legacies and highlight attempts to recover them.

One arrives courtesy of photographer Lyle Ashton Harris, whose 2020 work Succession features an array of images tinted with red, yellow and green – the hues of the flag of Ghana, where his distant ancestors came from, which he cannot trace, and where he taught for a time on campus of Accra from New York University. Another comes via Ain Bailey, whose 2022 film Untitled (Our wedding) features close-ups of old photographs from her parents’ wedding. As his camera leans over the images, they become grainy, even semi-abstract, as if this story escapes him.

“In the black diaspora,” Adusei-Poku said, “you don’t even have the ability to give your legacy to the next generation because you’re constantly occupied with the systemic racism you’re subjected to. It’s much more that brutal violence against the body is psychological.

Bailey’s film is set halfway through the show, and by the time most viewers get there, they will have noticed the stylized design of the exhibit. There are no white cubes in “Black Melancholia”, which is a risk – too many adjustments to the traditional museum-show formula, and an exhibit risks collapsing under the weight of its own frills. But Adusei-Poku succeeded.

The art historian, who previously taught at Bard’s Center for Curatorial Studies, said: “My students are always very upset about the white cube – there’s always an article about it. I thought, well, let me try to demonstrate what you can do with what we’re learning here and create a much more complex picture.

The entrance to the exhibition and the walls of its first gallery are covered with white curtains – a reference, according to Adusei-Poku, to Arnold Bode’s 1955 Documenta exhibition in Kassel, Germany. This Documenta was staged at a time when Germany was still reeling from the anti-Semitic, homophobic and racist carnage of the Holocaust, and Bode had sincerely hoped that modern art would contribute to the healing process. The 1955 Documenta ended up replicating some of the same wartime power dynamics – there were no black artists included, although there were many Jews whose art could have been judged “ degenerated” by the Nazis no more than a decade earlier. (Recent research revealed that one of the exhibition’s top advisers and other organizers had all been Nazi Party members.) In the wall text at the start of the show, Adusei-Poku writes that she, like Bode, wanted the curtains to signal “a new beginning” to the history of art.

Later galleries are painted in shades of black and blue. This latter hue was born out of requests from Kenyatta AC Hinkle and Alberta Whittle, two artists in the show, that their work be exhibited against certain blue tones. They both submitted shards of Pantone paint of their choice, and Adusei-Poku was thrilled that they ended up with similar shards. She also noted that in 18th century England, blue was associated with sadness.

Darkness unfolds a complex series of associations in Adusei-Poku’s performance. One of the central works in the exhibition is Roy DeCarava’s widely seen 1953 photograph of a dark hallway in a Harlem apartment building. Its void-like space plays elegantly on others in the show, such as those evoked by young artist Charisse Pearlina Weston, who displays an untitled photographic work from 2017 in which she has scraped off an abstract black print to reveal a square section hatched. canvas below. There are also characters that are rendered in shades of black, such as the male nude in Cy Gavin’s Brother (Tom Moore’s Jungle)2019, the top half of which dissolves into its pink-toned bottom like a puff of smoke.

“It points to a long history of black body representation, blackness, and the relationship to uncolored black,” Adusei-Poku said.

Discussing the influences on his organization for the exhibition, Adusei-Poku mentioned thinkers like Fred Moten, Saidiya Hartman and Christina Sharpe, as well as the concept of Afropessimism, the idea originally proposed by scholars like Frank B. Wilderson III and Orlando Patterson. , that blacks exist in a constant state of “social death.” However, she didn’t seem to care that those who come to ‘Black Melancholia’ don’t know of any of these scholarships.

What she wanted, instead, was for viewers to encounter the art in this exhibition and come away with larger ideas that cannot be expressed simply – to go beyond concepts such as “Black joy”. , which she described as a “neoliberal concept”. which she “could never relate to,” as it forces black people like her to wonder why they aren’t happy. She added: “There is a notion of melancholy that I want to situate outside of the binary.”