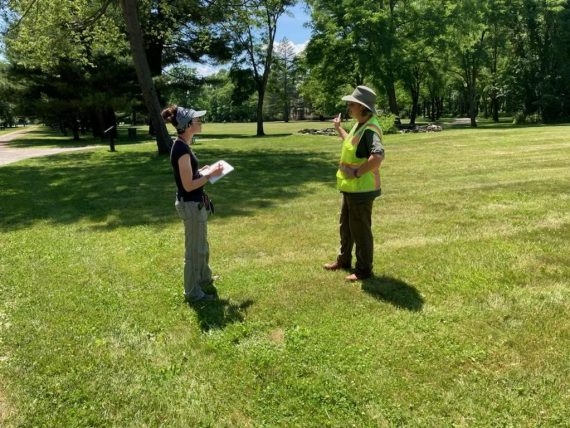 Sometimes a pile of dirt is just that – and valid archeology nonetheless.

Following the lead of Master of Anthropology in Public Archeology (MAPA) graduate students Jacob Bouffard and Kristin Clyne-Lehmann, nine students from the Poughkeepsie area have mapped several heaps, or mounds, in what was once the Kinderhook Orchard. by Martin Van Buren. The former president had an interest in agriculture, and the National Park Service (NPS) plans to recreate his prized orchard.

But with 12,000 years of human history, putting a shovel into the ground of the Hudson Valley can be risky business, at least from an archaeological perspective. The dirt piles may contain Aboriginal or historical artifacts.

This summer, the NPS first offered the Urban Archeology Corps (UAC) in the Northeast region, with the help of interns from Binghamton University. The opportunity presented itself thanks to MAPA alumnus Lexi Lowe ’21, who decided to conduct a UAC pilot program during her internship at the NPS National Historic Sites in Hyde Park. She suggested that the Public Archeology Facility (PAF) in Binghamton would be a good fit, explained PAF director Laurie Miroff.

“The National Park Service came to see us; one of the reasons is that we do so much public outreach,” Miroff said. “It’s part of our mission at the PAF.”

UAC teaches youth ages 15-26 about archaeology, stewardship, and career opportunities in the parks system and beyond. The inaugural cohort was largely between the ages of 15 and 17.

Bouffard and Clyne-Lehmann are themselves from the Poughkeepsie area. For the first part of their eight-week internship, they designed the program in coordination with the NPS; the program itself lasted three weeks.

“It was a great opportunity to work with the National Park Service and learn about their approach to archeology and how I could be of use to them in advancing their youth and public outreach goals,” Bouffard said.

“Archeology is for everyone”

During their first week, UAC participants received training on the NPS’s Voluntary Archaeological Monitoring Program (VAMP). Archaeological sites require periodic assessment for looting, vandalism, or damage from natural causes, such as rodents or fallen trees; volunteers provide a pair of eyes needed to track this damage.

Students participated in digs during the second week at both the Franklin D. Roosevelt National Historic Site and the Van Buren property. The National Park Service plans to restore the original rose arbor to the Roosevelt House; the students did shovel tests to look for the ancient poles that once supported it. They found post mold, which appeared as a dark spot in the dirt, Miroff said.

“It was one of the hottest weeks on record in the summer, and they were champions; they crossed,” Bouffard said. “We had the opportunity to learn some things while achieving some goals for the parks.”

“They will do hard work for the popsicles,” Clyne-Lehmann joked.

At the former Van Buren Orchard, now a woodlot, students mapped several mounds, noting their location and dimensions on graph paper, and conducted shovel tests. The NPS and the Stockbridge-Munsee Mohican community, whose ancestral land includes the site, are going to great lengths to avoid disturbing the ground, Clyne-Lehmann said.

Some of the mounds contained historical artifacts and required no further investigation. in his report to the NPS, Clyne-Lehmann recommended that they be protected when restoring the orchard.

Excavations have uncovered the mystery under the largest mound: a piece of plastic at the bottom.

The students were disappointed, but Clyne-Lehmann said their work still uncovered something important: data. NPS officials now know they don’t need to go to great lengths to protect this mound during the orchard restoration project.

Participants made field visits throughout the three weeks to contextualize the importance of VAMP. The Hudson Valley has a large number of archaeological sites in varying states of upkeep, ranging from well-preserved mansions to places linked to slaves or indigenous peoples.

“We were trying to give students a more diverse exposure to archaeological representation, because we were very aware that we were working with these rich sites,” Clyne-Lehmann said. “Archeology is for everyone.”

Although this year’s UAC was the first such program in the North East, it will not be the last. Over the past week, this year’s cohort has created training materials for future VAMP volunteers, including a PowerPoint, brochures, and a time-lapse video of an excavation.

The UAC internship was also meaningful for Bouffard and Clyne-Lehmann, offering them a chance to give back to budding archaeologists in their community. Growing up in Pauling, Bouffard didn’t hear about career opportunities in archeology and cultural resource management until he reached Dutchess Community College, he said.

“It was great to be able to spark that interest in the students and introduce them to the world I’ve been so involved in for the past three years,” he said. “It took them out of their comfort zone a bit and also changed the public perception of archeology a bit. It’s not just something that professors do in distant universities; it’s in their own backyard.